Despite record shale production in other parts of the state, oil and natural gas development is relatively new to Ohio’s Ashland county region. And as is the case whenever a “new-to-you” industry enters a community, there can exist a bit of a learning curve in terms of understanding the operational process and potential impacts that industry might have.

A recent Ashland Times-Gazette letter authored by Deborah Hughes is a prime example of this. The letter questioned the economic impact that Cabot Oil and Gas – which recently began oil and natural gas exploration in Ashland County – has had in Pennsylvania, where the company is currently the second highest producer of natural gas.

Here are a few key things to clear up:

Claim: “[A] Cabot Oil representative claimed the royalties for 10 years of drilling in Susquehanna County in Pennsylvania totaled $9 billion. The truth, in fact, the total for two counties combined is just above $1 billion over a 10 year period.”

FACT: Cabot has never claimed it has paid $9 billion in royalties, but the company – and the natural gas industry as a whole – has invested heavily in the Appalachian Basin.

The $9 billion figure referenced in the Ashland Times-Gazette article was misreported and has yet to be corrected to accurately reflect the royalty figures despite requests to do so. In full disclosure: Cabot has actually paid $1 billion in royalties to residents of Susquehanna and Wyoming Counties as of the summer of 2017, a vast majority of which has been distributed in Susquehanna County, where Cabot has developed all but two of its Pa. shale wells.

To be clear, a $1 billion infusion is huge for a county with a population of less than 42,000 people. For perspective, Ashland County’s population of roughly 53,000 people isn’t much higher.

And that’s just the royalties. Here’s a non-comprehensive list of some of Cabot’s overall community investments:

That chart alone represents more than $6.2 billion in investments, and doesn’t even include things like the yearly “Give a screening, get a screening” program, Junior Achievement educational partnerships, annual toy and food drives, time, equipment and monetary donations to the Susquehanna County Career & Technology Center, increased natural gas local distribution campaigns, and various other grants over the last decade.

Claim: “Also Cabot has claimed that unemployment is virtually non-existent? The unemployment rate is 4.8 percent in Susquehanna County and natural resources and mining account for only 6 percent of the jobs.”

FACT: Susquehanna County is fully employed and the multiplier effect on job creation from oil and gas is tremendous.

In a response letter, Cabot addressed this statement thoroughly, as did Tom Shepstone at Natural Gas Now. As Cabot explained, the county’s unemployment rate improved from 8.4 percent in May 2009 to 4.1 percent in May 2018 – a 51 percent decrease. Further, as Cabot noted,

“Put another way, Susquehanna County has a labor force of 20,300 workers. Of the eligible workforce, 19,500 people are employed; meaning only 800 people are seeking employment.”

For all intents and purposes, because “full employment” is never actually counted at zero percent due to the natural fluctuation of the jobs market, Susquehanna County is fully employed.

As for Hughes’ claim that only six percent of the jobs in the county are related to oil and gas development – anyone who has been to Pennsylvania’s Northern Tier before and after shale development began can describe how misleading the federal and state direct employment figures can be. As Shepstone explained,

“Economic impact is proportionately related to the multiplier effects it has in stimulating other business activity and the value of what is produced. Calculating the contributions of the gas industry by only counting the number of folks working on the drill rig or fracking crew is like figuring the value of a vehicle by the number and price of the tires. There’s a whole lot more going on that can’t be ignored.”

In fact, a 2017 PricewaterhouseCooper study found that the oil and natural gas industry directly and indirectly employed more than 300,000 people in Pennsylvania in 2015.

From local hotels and restaurants to truck drivers and excavation companies, and of course the employees working directly on a well site, the natural gas industry has helped to spur unprecedented employment and business growth in the Appalachian Basin.

Claim: “The Pennsylvania Department of Environmental Protection found overwhelming evidence that Cabot was in fact responsible for water contamination and they were fined for it. In fact, there have been so many complaints of water contamination in Pennsylvania from drilling that a study from February 2016 shows that out of 2,309 complaints 44 percent were water issues.”

FACT: A decade of study and experience has shown fracking is not a major threat to groundwater.

Despite nearly a decade of safeguarding the environment during its operations, Cabot has one blight on its record that activists are insistent on continually discussing. This singularly available example actually shows just how successful the company has been in safely developing natural gas in Pennsylvania. And claims of water contamination in Dimock, Pa. are a lot more detailed and complicated than Hughes’ oversimplified assertion.

For those in Ashland County who may be hearing about Dimock for the first time, here are some key details:

Equally important to understand is that a myriad of water studies, historical accounts and expert testimonies have concluded the county has a long history of naturally occurring methane in its water supplies. A 2018 Yale University study found water quality in Susquehanna County has not been impaired by natural gas drilling, and a 2018 Penn State University study of Bradford County, Pa. found water quality has actually improved since shale development began in the region. Additionally, the Susquehanna River Basin Commission’s (SRBC) continuous monitoring of the basin – of which Susquehanna and Bradford counties are located – has found “no discernable impacts” to water quality or quantity in the region from oil and gas activities year after year.

Unlike the contradictory data cited by Hughes – data that comes from two organizations with clear agendas to shut down the Appalachian Basin’s oil and gas industry: Earthworks and Public Herald – the Yale, Penn State and SRBC findings are based on actual water sampling and monitoring near shale activity.

Further, a situation like this is even less likely to occur in Ohio because the state has far stricter water well regulations than neighboring Pennsylvania. A recent University of Cincinnati water quality study, which found no increases in methane concentration in water wells in five of the most heavily developed shale counties in Ohio, further demonstrates this fact.

Claim: “Well casing failure rates have not improved; there are still 6.3 percent of new well casings that fail and that number just gets higher as they age.” 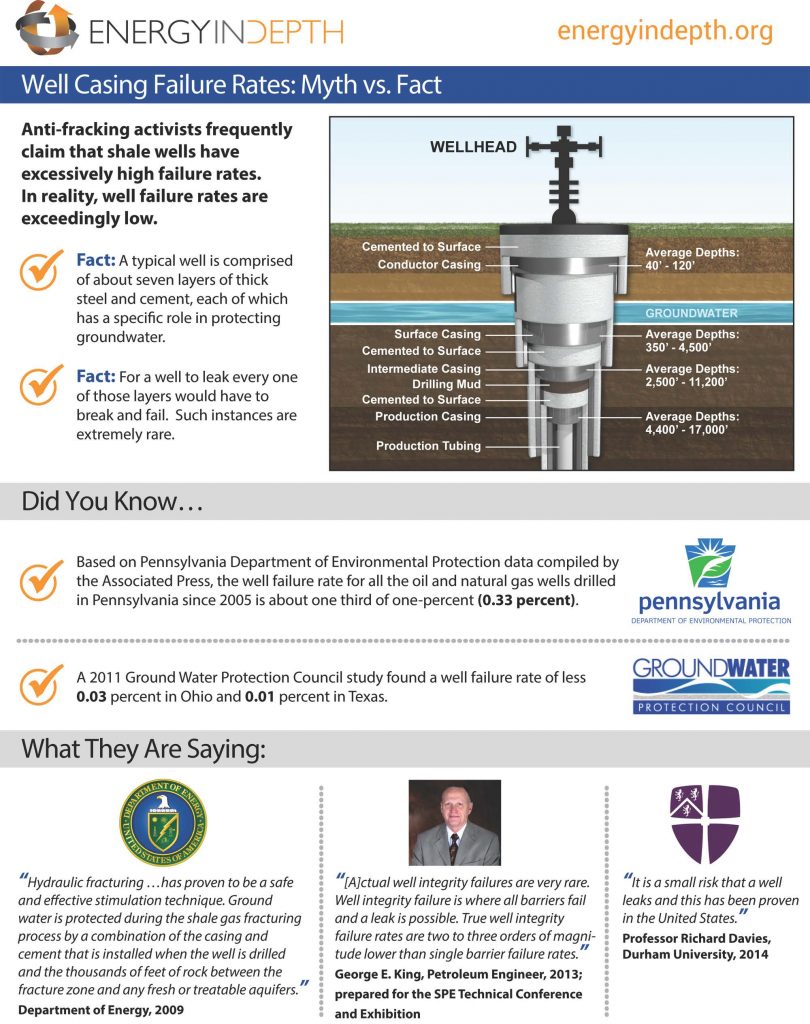 And earlier this year, DEP released its comprehensive analysis of the structural integrity of shale wells across the Commonwealth finding that “the majority of wells in the state are being operated in a manner that greatly reduces the risk for groundwater impacts.” Further, DEP explained that gas or fluid migration from a well “has the greatest potential to result in environmental concerns,” but 2014 data demonstrated that this is not a widespread issue for the state’s oil and gas industry. In fact, according to DEP, the data “showed that less than 1 percent of operator observations indicated the types of integrity problems, such as gas outside surface casing, that could allow gas to move beyond the well footprint.”

The oil and natural gas industry – including Cabot Oil & Gas – has a decade-long history of safely developing these important resources in the Appalachian Basin. And while oil and natural gas exploration is new to Ashland County, the development of these resources has been game-changing for Ohio’s shale counties and neighboring Pennsylvania and West Virginia. If all goes well with Cabot’s exploration wells, Ashland might experience similar opportunities.