Activists Rely on Fear Mongering in the Heart of Texas

As Texas continues to see prolific oil and natural gas production, additional infrastructure is needed to bring the state’s abundant energy resources produced in the Permian Basin to markets along the Gulf Coast. These necessary projects, like pipelines, are being threatened by a small but determined group of activists seeking to halt the development of critical energy infrastructure with a coordinated misinformation campaign that relies on scare tactics and false or exaggerated claims.

The Texas Real Estate Advocacy and Defense (TREAD) Coalition, a well-funded environmental activist group backed by a public relations firm in Austin, has spearheaded a series of lawsuits seeking to prevent the construction of the Permian Highway Pipeline, a 430-mile natural gas pipeline traversing from the Waha Hub in West Texas to just outside the Houston area.

To whip up support for their legal effort, TREAD has relied on incendiary language intended to scare the public into opposing the project. The group recently paid for a series of ads (see below) in local newspapers in the Texas Hill Country claiming pipelines are fundamentally unsafe and alleging the pipeline operator is building a “blast zone” through the community. 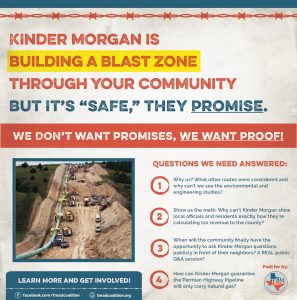 These claims are unfounded and ignore facts. Pipelines are the safest and most efficient method of transporting the energy we use every day. Each year, 2.6 million miles of pipelines safely move trillions of cubic feet of natural gas needed to power our homes, towns and businesses.

If activists are successful in halting the construction of pipelines, the effects would be felt immediately throughout the state. Pipeline opposition threatens U.S. energy security, global efforts to reduce greenhouse gas emissions, historical job growth in Texas and billions of dollars in revenue for our state’s education system.