After Denial, Rockefellers Admit They Targeted Exxon With ‘Paid For’ Columbia J-School Series

A new column published in the New York Review of Books shows the Rockefeller Family Fund (RFF) specifically targeted ExxonMobil when it funded a special reporting project at the Columbia School of Journalism. The column, written by RFF president David Kaiser and RFF director Lee Wasserman, directly contradicts past denials that Exxon was targeted and raises serious new questions about “pay to play.”

Let’s compare what RFF told Reuters in March 2016 and what the Rockefellers are saying now: 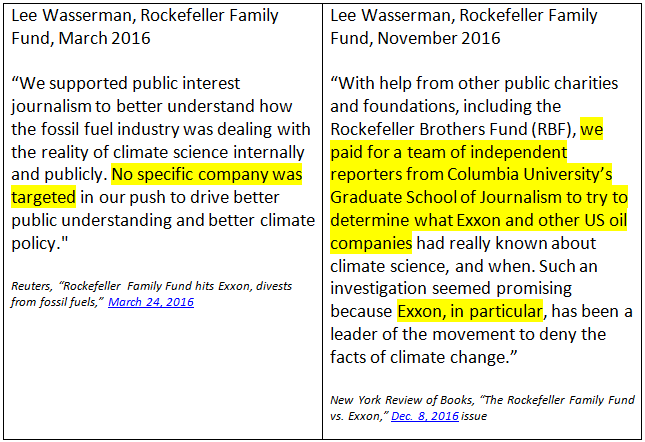 In other words, these stories are the result of a direct payment for a specific story to be written. The payment came from a group that’s bankrolling the entire #ExxonKnew campaign, which needs these news stories to support its talking points. And what’s even more stunning is that this funding information originally wasn’t disclosed. In fact, the Rockefellers and Columbia School of Journalism were previously so invested in hiding their affiliation that when the stories appeared in the Los Angeles Times there was no mention that the Columbia School of Journalism is funded by Rockefellers. Only after Energy In Depth and other news outlets called them out did the outlet quietly add a correction noting the funding source, but that happened several months after the stories were published.

That’s not all: even the website of the Columbia Energy and Environment Reporting Fellowship did not originally disclose its Rockefeller funding according to an archived copy of the page. But once again, after the funding was revealed, the fellowship’s website was quietly updated to include its financial connections to the RFF and other organizations.

After this disclosure problem came to light, the Columbia Journalism Review reported that this raises ethical questions about funding sources for non-profit organizations like Columbia that produce what many would otherwise see as objective reporting. As the CJR explains,

“But the practice also raises questions of balance in what subjects get reported, as well as appropriate disclosure of the outside funders and their political leanings. In the case of Columbia, The Energy and Environmental Reporting Project is funded in part by a group of philanthropic organizations, at least one with a clear advocacy bent on the issue. The names of the funders were not listed on the two articles when they were published by the Los Angeles Times, though they were later added online.” (emphasis added)

As part of that article, CJR interviewed Dean of the Columbia Graduate School of Journalism, Steve Coll, and reported the exchange this way:

“Both the [Los Angeles] Times and Coll have reiterated that the project’s funders had a hands-off relationship with its journalism…In addressing those complaints in his written response to Exxon Mobil, Coll mentioned the energy giant’s support of Columbia University research in other fields: ‘You therefore understand that the issue is not who provided funding for this or any other Columbia University project, but whether the work is done independent of the funders…The fact is that this reporting was not subject to any influence or control by the funders, the Times maintained full editorial control over all that it chose to publish, and your letter provides no information to doubt that this is so.’” (emphasis added)

Coll went on to explain,

“It’s similar to the ethics that had to be managed in the days when this kind of work was supported by commercial advertising,” Coll says. “[Advertisers] were very financially important to the newspaper, but the publisher and the editor in the newsroom figured out how to build a wall between the advertisers and the work. And that’s exactly what we have to do here: We have to build a wall between the funders and the work. That’s what I’m responsible for.” (emphasis added)

But now – after denying that they targeted a particular company – the funders are admitting they had Exxon in mind when they paid for the Columbia reporting project. And wouldn’t you know, Columbia’s team of reporters went after Exxon in just the way their donors wanted.

Are we supposed to believe this is a mere coincidence?

That’s just one of the questions Steve Coll can expect to be asked over the coming days and weeks from the press, from media watchdogs and from people who respect the Columbia Journalism School and wonder what’s happened to it.