American shale production continues to dramatically reshape world energy markets—not only by lowering prices, but also by ensuring price stability, according to a new report by the Dallas Federal Reserve. From the report:

“The oil price that companies need to profitably drill new wells has closely tracked prices for long-dated oil futures in recent years. The emergence of U.S. shale production seems to be playing a large role in anchoring long-term oil prices.”

Over the last year, the average breakeven price (the oil price needed to profitably drill a new well), has fallen 4 percent. What’s even more impressive, the prices of long-dated oil futures are stabilizing as well. Studying futures prices for delivery dates five to ten years into the future, the report found that breakeven prices for U.S. operations remained close to long-dated futures from late 2014 through 2018. 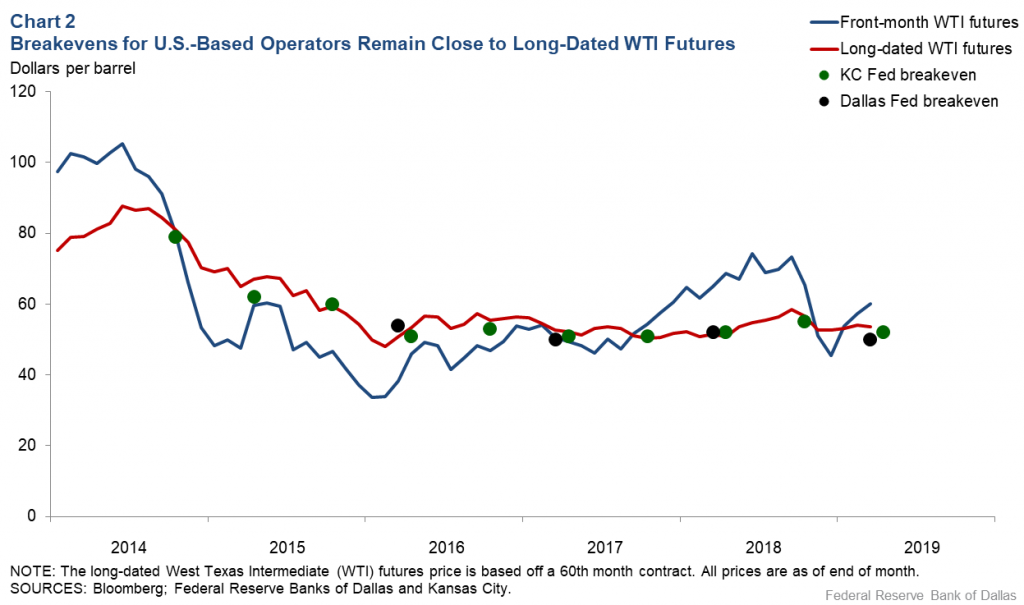 To a large degree, this is because shale production is more flexible. Since shale wells can be drilled and brought online comparatively quickly, producers are able to respond to more minute price fluctuations by increasing supply. These producers “represent strong forces that should keep long-dated futures prices from rising too high or falling too low,” they wrote.

“Shale production means there is a much larger amount of supply that can be called into action given a much smaller price increase than in the past.”

A significant number of shale projects can be called upon in the $50-60-per-barrel price range, something that would have been thought impossible a few years ago.  Cost curves show that over the last decade, breakeven prices have flattened, as technological innovations have helped companies reduce production costs. As the report explains:

“While market participants may differ on how much oil is available at a given price, they are all aware of the overall trends. These represent strong forces that should keep long-dated futures prices from rising too high or falling too low.” 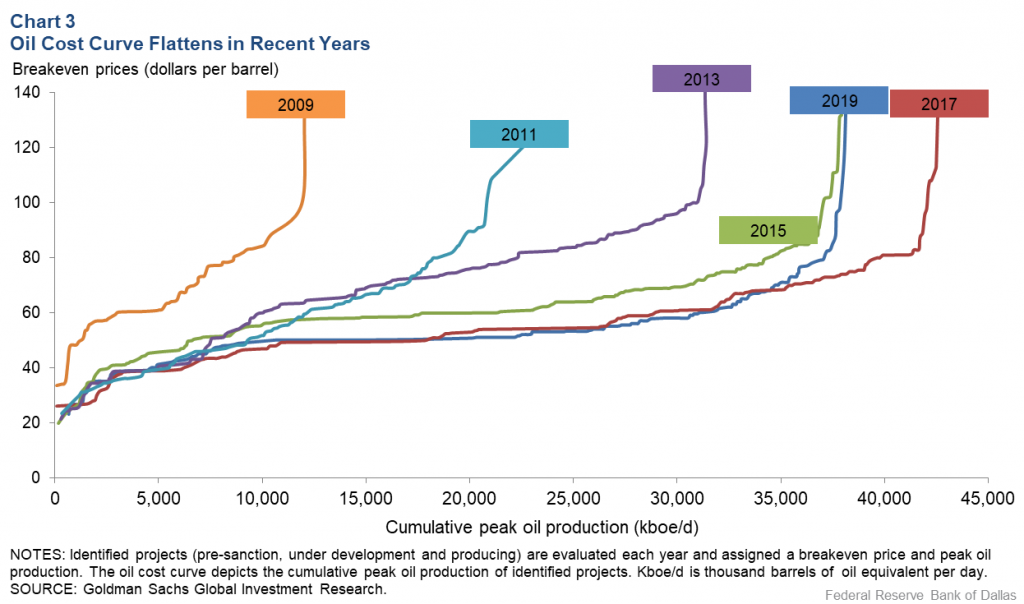 The impacts of shale aren’t limited to just shale oil.

As production costs for shale have dropped dramatically over the past decade, companies operating more traditional oil holdings both onshore and offshore have been forced to lower costs to remain competitive. From the report:

“As a result, larger quantities of oil are economical to produce at much lower prices than would have been possible before.”

This reiterates the findings of a recent Rystad Energy report, which found that American shale oil had gone from being the world’s second-most-expensive global source of new energy to its second-cheapest in the space of four years.

In addition to keeping prices low, this new energy supply is keeping prices stable, something that has significant economic benefits on its own. Because of how critical oil is to the global economy, dramatic unexpected price swings can have painful impacts for both companies and consumers. Volatile energy prices can whipsaw revenues for companies that rely heavily on petroleum taxes and changes in oil prices have further impacts on employment and household budgets.

In the past, news of tensions in the Middle East or instability in Venezuela was enough to send energy prices soaring. This is not so much the case today. With the increased development of shale reserves, which take months rather than years to pass from exploration to production, these sorts of developments are having a much more diminished effect on oil prices.

In short, instead of banding together to limit production and force higher prices – as has traditionally been the model for the global market –shale producers acting independently are helping to keep prices cheap and consistent. And it’s all thanks to American shale.