An In-Depth Look At Energy In Denial

Local activists have created a new group called Energy In Denial, playing on the Energy In Depth name in a naive attempt to take their grassroots efforts to a national level. Ironically, “Energy In Denial” couldn’t be a more fitting name for its founders, although we suggest it be shortened to simply read “Denial.”

When an organization spoofs your name, you’re going to look into it. Even if that group has differing opinions from you, the fact creators feel the need to piggyback off of your name is a big deal. More than anything, it’s really just a huge compliment.  Think about it: your organization has made an impact, is driving conversation and its name is popular enough to steal. So before we begin our in depth look at Energy In Denial–a more than fitting name for such an organization–we wanted to say, simply, “thank you.”

We also must preface our discussion with this observation from Michael Chrichton, the late author of The Andromeda Strain and Jurassic Park and creator of ER:

“The greatest challenge facing mankind is the challenge of distinguishing reality from fantasy, truth from propaganda. . .  We must daily decide whether the threats we face are real, whether the solutions we are offered will do any good, whether the problems we’re told exist are in fact real problems, or non-problems.”

Crichton’s quote really gets at the heart of the discussion over natural gas.  Whether it’s fear induced with partial or inaccurate information or fear instilled and ingeminated by the outright denial of scientific fact, fear is impacting our energy discussion today in very unhealthy ways.  The only way to get over this fear is to start thinking rationally again. Fortunately, more and more of these outlandish activist claims used to convince legislators and local officials into pushing for delays, moratoriums and bans are being debunked with thorough scientific investigations. And yet, our friends on the other side remain in deep denial, and it’s going to take a lot more thinking, researching and education.

What’s In a Name? Denial.

Energy In Denial is the creation of Susquehanna County activist Craig Stevens, the self-described President and founder.  It’s a deeply ironic name for such an organization, for he and other activists across New York and Pennsylvania seem to be in a state of denial as they rant against natural gas using debunked claims.  Or, is it something else?  We’ve pondered this before. Are these professional activists really in denial of the scientific tests disproving their claims, or are they hoping the people they’re attempting to mislead are simply ignorant of the truth surrounding the accusation?

Regardless, facts and science obviously mean little to these folks, and communities such as Dimock and Franklin Township in Susquehanna County have been forever impacted — by the stigma of non-existent contamination. Let’s take a look at a few examples of claims that have been perpetuated by Stevens and friends and proven to be untrue. For the sake of time, we’ll stick just with recent incidents in Susquehanna County, though we know this type of activism has unfortunately gone national.

So many incidents – so much denial!  Yet, in a warped sort of way, it all makes sense, especially when one realizes just who it is that Stevens really represents – the trial lawyer industry – which has a stake in ensuring issues remain after facts come forth.

We’ve known Craig Stevens for quite some time.  He came to the Northeast from California, where he was born and raised, to assert family claims when the natural gas boom started.  Yet, he shows up everywhere throughout our extended region at meeting after meeting, claiming to be a 6th generation Pennsylvania and 5th generation New Yorker.  Recently, we also noticed him using the Energy In Denial name, including in this appeal for funds to support his and Vera’s work, which begins at 7:23 in this video:

Even more recently, we also noticed Energy In Denial’s name showing up as the operator of a website known as Fracking Senseless, as you can see below. 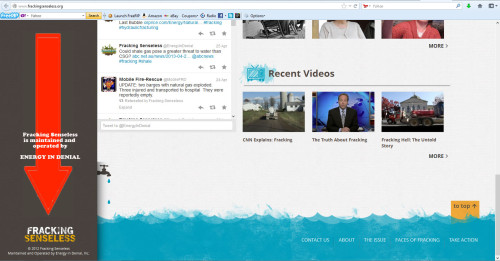 The website is a compilation of the usual nonsense and denials of facts and science that appear on so many anti-gas platforms.  Seeing the Energy In Denial named attached to it and knowing Craig claimed to be its President and founder, we decided to check it out further.  We researched it and went to Stevens himself, who took denial to a new level. When asked about his own organization, Energy In Denial, by our co-worker Rachael following the Montrose FrackNation screening, Stevens didn’t seem to know much about it and even refers to the group as “they.”

Wait, what? According to the Articles of Incorporation for Energy In Denial, Craig L. Stevens is the Incorporator of the Corporation. And he’s been using “President and Founder” in his title over the past few months.

Here’s a frame from that video trying to raise funds for his cause: 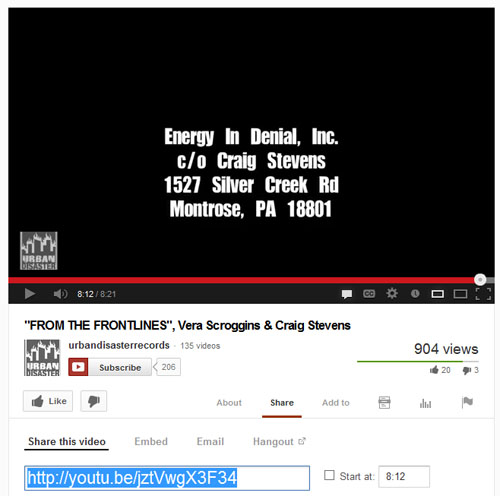 And, here’s how he identified himself for testimony before the New York State Legislature:

This was from a New York State hearing held in January of this year and in every video description, the title remains the same. 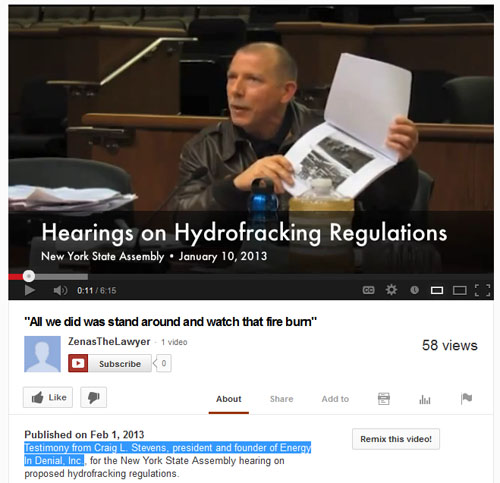 Now this is where it really gets interesting. If you look back on those Articles of Incorporation, the Register and Agent of Energy In Denial is Edward J. Ciarimboli of Fellerman and Ciarimboli, a law firm in Kingston, Pa.  Their office is the listed address for the organization as well. So the ZenasTheLawyer name and reference make one wonder just a little bit if the video was posted by Ciarimboli — and if so, why a law firm in Luzerne County, Pa., is involved with Susquehanna County activists traveling to New York State.

But that’s just the beginning, because when one contacts Fracking Senseless, it goes to another law firm — the Speer Law Firm, helpfully including a phone number.  This turns out to be the phone number of a pair of lawyers out of Kansas City, Mo., who routinely sue hog farms. They also maintain another website known as The Center to Expose & Close Animal Factories.  Attorney Charlie Speer, an ally of Bobby Kennedy, Jr., is the force behind this oinker brigade.

This helps explain something else – the listing of Energy In Denial as a sponsor of an advertisement in Iowa (pork capital of the world) lobbying for a natural gas moratorium in New York. This advertisement is the one Rachael is referring to in the above video — the ad Stevens claims he doesn’t know anything about, despite the fact his organization is a supposed sponsor. 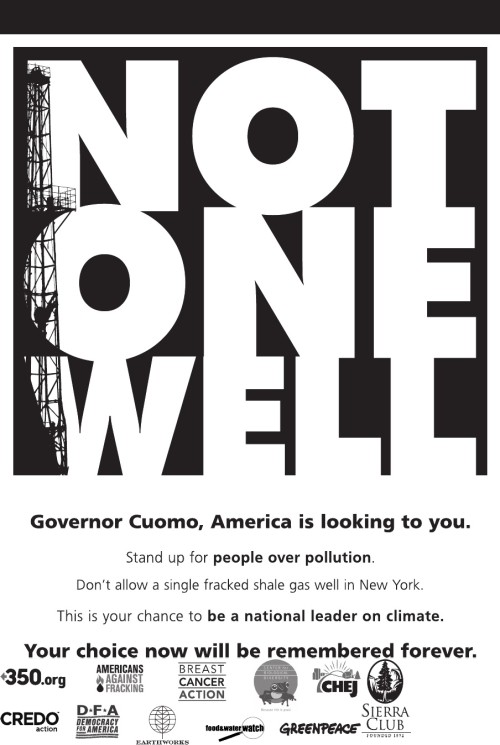 If one follows this link, there is a larger list of companies involved, including Energy In Denial.  The ad was paid for in part by Food & Water Watch, which receives much of its funding to work against natural gas development from the Park Foundation, as we’ve discussed in previous posts. Once again, this is a case of outside interests trying to influence New York policy, including Stevens, who claims to be unaware his organization participated. It’s not the outside influence that’s the biggest problem in this instance, though.  Rather, it’s the fact Energy In Denial is obviously little more than a tool for trial lawyer business development (“rainmaking”).

How do we know this?  Well, check out this Facebook post by the Fellerman & Ciarimboli law firm (the law firm Craig used to incorporate Energy In Denial): 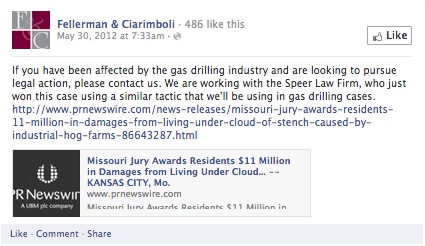 So, now we know.  All those endless remarks and all that continuous fear-mongering by Craig Stevens is for one very simple purpose: recruiting clients for two sets of trial lawyers from Pennsylvania and Missouri, the latter looking to score big with a new plaintiff class.

One might also call it cynical.  Exploiting fear may be good for business, but it’s hardly the way we should be making decisions on major issues (i.e. shale development), as Michael Chrichton so aptly noted.  Denying facts is not a prescription for resolving our differences, which brings to mind another quote that seems to sum up the premise of Energy In Denial.  It’s from the Calvin and Hobbes creator, Bill Watterson:

It’s not denial. I’m just selective about the reality I accept.

Yes. Yes they are – and it’s all for one purpose: putting lawsuits on the table for some hungry lawyers, while communities here in Pennsylvania and New York pay the price.