Energy Transfer Partners subsidiary Sunoco Pipelines has multiple pipelines and infrastructure in various phases of development throughout Pennsylvania as part of its Mariner East projects. And a recent update to the projects’ economic impact analysis finds that the total estimated economic impact has more than doubled from $4.2 billion to a whopping $9.1 billion.

“By 2020 the Mariner East projects, the fractionation facility and the associated improvements at MHIC, will produce between $140 and $210 million of ongoing annual economic impacts in the Commonwealth, supporting between 360 and 530 jobs direct, indirect, and induced jobs with employee compensation between $30 and $45 million.” (emphasis added)

Nooter Construction, a national construction contractor that has had a regional office in Bucks County, Pa. for more than 35 years says that 40 percent of the office’s work is on Sunoco Logistics’ Marcus Hook Industrial Complex (MHIC) in Delaware County, Pa. Nooter has employed more than 700 workers on construction projects at the facility, translating to 2.1 million man-hours and more than $300 million, while allowing the company to hire 40 new employees over four years.

Labor unions have especially benefitted from the jobs these projects create. Amber Barnes, an excavator operator and member of International Union of Operating Engineers Local 542, told Sunoco that her union’s hiring hall has been “virtually cleared out” of workers thanks to the labor demand for the construction of the Mariner East 2 pipeline.

Further, the projects are estimated to generate $122 million in tax revenue for the Commonwealth during construction. Here’s a short video comparing the 2015 and 2018 economic impact estimates:

The economic impacts covered in this analysis are just for the Mariner East 1, Mariner East 2 and improvements to the MHIC – it doesn’t even take into account additional Mariner projects in the works.

A recent Department of Energy (DOE) report showed that natural gas liquids (NGLs) production in the Appalachian Basin (Ohio, Pennsylvania and West Virginia) will be staggering in the future, projecting that production will double over the next 13 years and reach 1.2 million barrels per day (Bbls/d) by 2050. NGLs include ethane, propane, butane and natural gasoline that can be used for things like home heating, to make gasoline and to produce items we use every day, such as plastics.

In anticipation of this increased NGLs production, the region has been preparing for how to best maximize the resource locally and through export. That planning – in addition to plans for petrochemical facilities, ethane cracker facilities, and a storage hub – includes the Mariner projects, which will transport NGLs from Pennsylvania, Ohio and West Virginia to propane distributors in Lebanon and Berks counties, Pa.; a power plant in Cambria County, Pa.; the MHIC in Delaware County, Pa. (Mariner East 1 and 2) to Michigan and the Canadian border (Mariner West), and to Lone Star’s storage and fractionation complex in Mount Belvieu, Tx. (Mariner South).

In other words, these projects will be two-fold, allowing the region to both locally use the NGLs and to benefit from the national and international demand for these resources. As Energy Transfer explains,

“These projects will provide a comprehensive takeaway solution for natural gas liquids from the Marcellus Shale.” 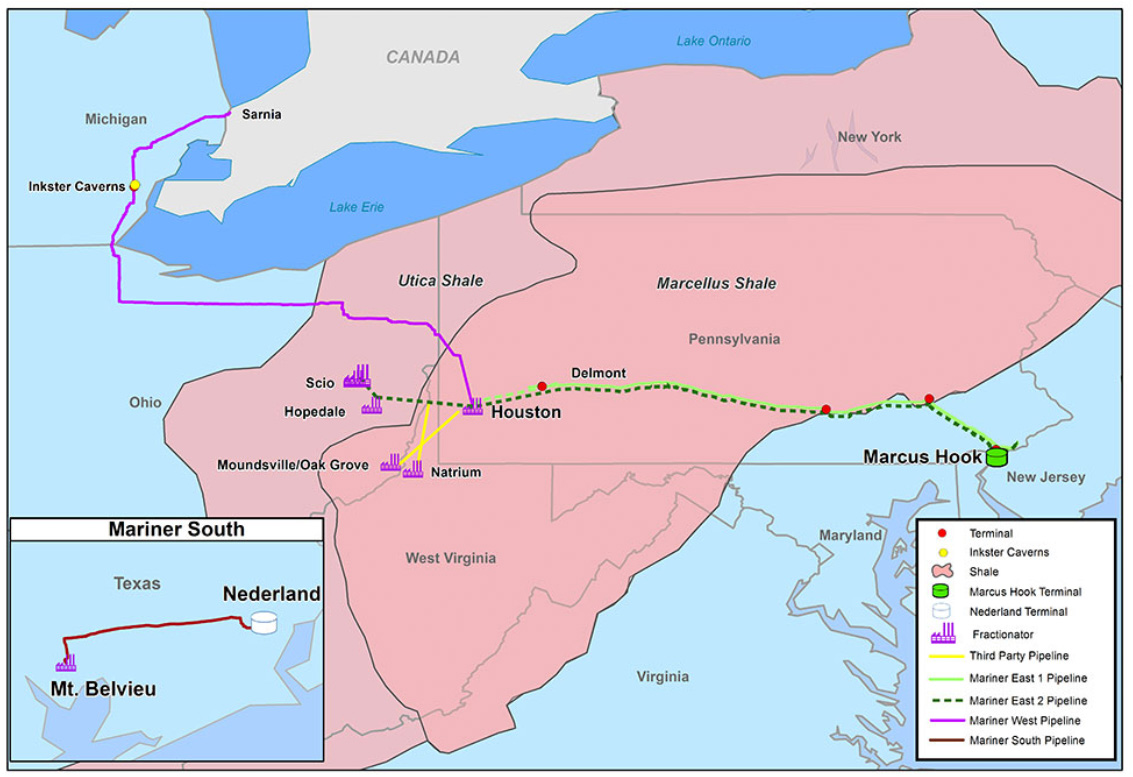 Marcus Hook was home to an oil refinery built in 1902 that announced it was closing its doors in 2011. The site reopened in 2014 with a new purpose: to become the Northeast hub for the distribution of NGLs produced in the Marcellus and Utica shales. The following NBC10 video explains some of the transformation the facility has undergone to be able to store and transport the Appalachian Basin’s NGLs and the economic impact this has had on the community.

For instance, the improvements have created roughly 15,000 jobs throughout construction and 300 to 400 permanent positions. The project also has “Greater Philadelphia poised to become the next global energy hub.” The Mariner East pipelines will supply the NGLs for the facility.

Plus, the MHIC is having major economic impacts for the local community. The recent economic analysis found,

“With all of the improvements at MHIC, the properties were reassessed in 2017. When fully operational, ETP will remit $7 million in combined property taxes to Chichester School District, Marcus Hook Borough and Delaware County, triple what was due in 2017.” (emphasis added)

“In the last three years since I have been mayor, there has been more economic activity than the last 30 years.”

Mariner projects only part of the Appalachian Basin story

The best part of this analysis is that it’s only one piece of the story taking place for new infrastructure being built in the Marcellus and Utica shales to transport natural gas locally and outside of the region. EID’s recent analysis found that the Appalachian Basin currently has at least $23 billion in pipeline infrastructure planned.

In addition to the Mariner pipelines, here are some of the additional pipelines planned in the region: 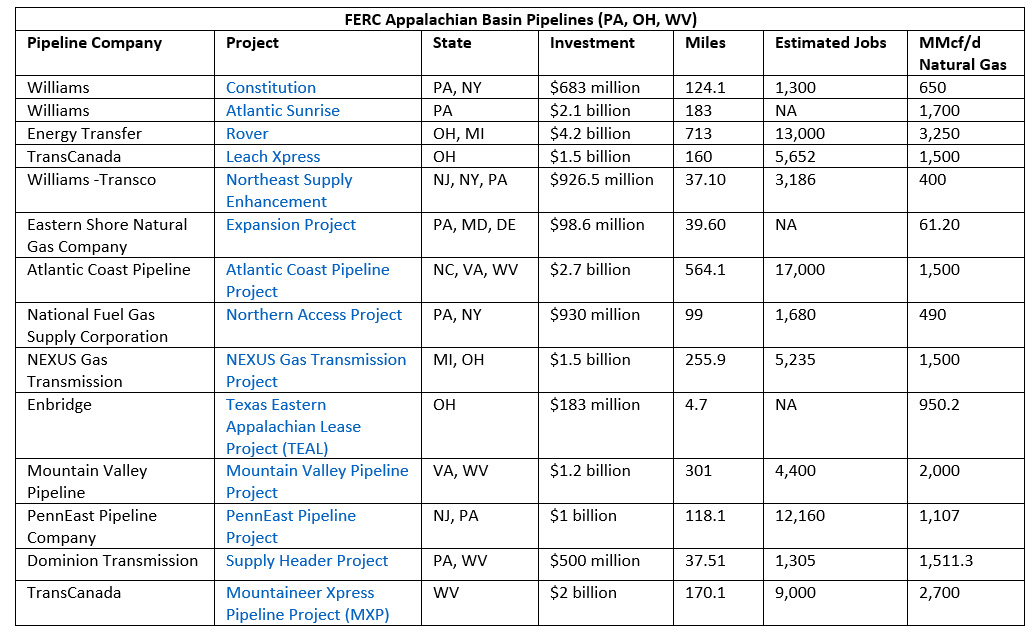 The Appalachian Basin has an abundant supply of natural gas and natural gas liquids resources that are changing the economic landscape of the region. From a manufacturing revival to new natural gas-fired power plants and pipeline infrastructure – this is only the beginning of good things to come.