An ongoing effort by a prominent anti-fracking group to weave the narrative that oil and gas industry energy education programs are being used to push pro-industry propaganda got some media traction last week.

This struck us as more than a bit ironic, considering that the media (not surprisingly) has largely ignored numerous examples of anti-fracking indoctrination taking place in U.S. schools. Here is a closer look at three of the most glaring examples we have flagged.

The Feb. 20 issue of “Junior Scholastic,” a nationally-distributed classroom magazine intended for middle school-age children, featured a story headlined “The Fracking Fight” that pretends to be a straight-up journalistic piece telling both sides of the national fracking debate. 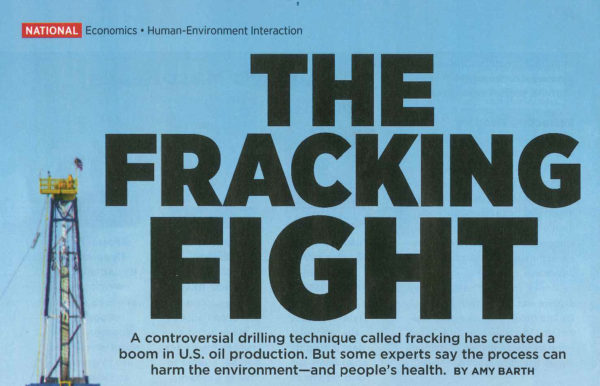 But a closer look reveals it is nothing more than thinly veiled anti-fracking propaganda. The following photos from the article pretty much tell the tale. 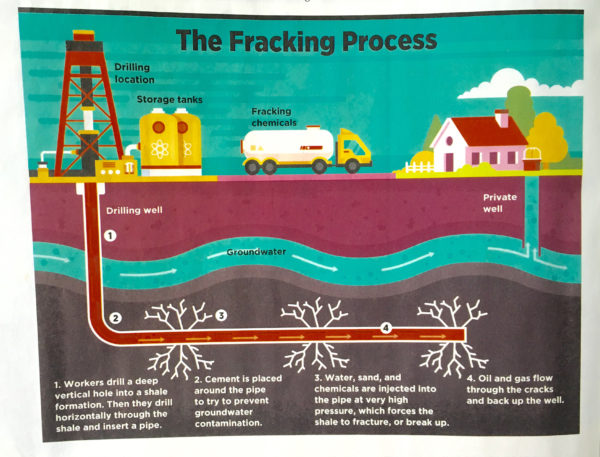 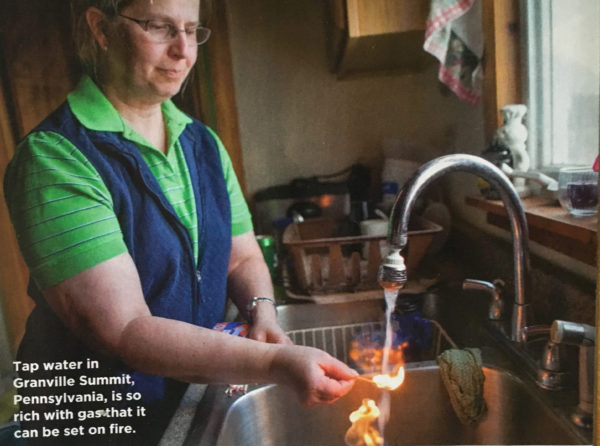 Pictures are obviously far more likely to leave a permanent impression on a middle school child than any other editorial content, and considering the above images from the article look like they might have been taken directly from an anti-fracking website, it is clear what the intended takeaway was.

The cartoonish illustration of the hydraulic fracturing process shows fractures extending to just below the water table, giving the impression that fracking is an inherent threat to drinking water. That notion has been thoroughly debunked by several academic institutions and no fewer than seven government agencies, most notably the U.S. Environmental Protection Agency’s (EPA) recent five-year study that found “the overall incidence of impacts is low.” That report also notes that the median hydraulic fracturing treatment occurs 8,000 feet below the surface. Suffice it to say, the average middle schooler would never get the impression that fracking typically takes place more than a mile below aquifers based on the graphic Junior Scholastic chose to use.

Of course, the use of a cliché “flaming faucet” photo is a blatant attempt to exploit the fraudulent “flaming faucet” scene from Gasland and further perpetuate the myth that fracking contaminates drinking water. Notably, the particular flaming faucet pictured above is not discussed or even referenced anywhere in the article. It is apparently just presented for “educational” (sarcasm) purposes.

These photos are more than enough to skew young, impressionable minds toward an anti-fracking conclusion, but the content of the accompanying article is, in many ways, just as skewed as the photos.

The first seven paragraphs of the article center around the anecdotal accounts of the Headleys, a Pennsylvania family that tells Junior Scholastic how shale development caused their children to have a myriad of health problems — including rashes, stomach aches and nosebleeds. Junior Scholastic trumpets a particularly alarming statement in the following pull quote from the piece.

Junior Scholastic doesn’t bother to reveal that the Headley’s claim that fracking has contaminated their spring water has been thoroughly debunked by the Pennsylvania Department of Environmental Protection,

“The state Department of Environmental Protection said flammable spring water at the Headley farm is the result of methane migration from an old coal seam and not gas well drilling.” (emphasis added)

The article also doesn’t mention that the family’s beef with shale development has been driven by the fact that the Headleys sold away their mineral rights when they bought their property in 2006.

Even in instances in which both sides of the fracking debate are presented, bias is evident in the fashion the author chooses to present the pros and cons of fracking. Fracking cons are described as being according to “experts” while pros are according to what “industry says” or “supporters of fracking say.”

Here are a few examples:

Of course, numerous experts agree that fracking has in fact created hundreds of thousands of jobs and a financial windfall for the entire country — this isn’t just the opinion of fracking “supporters.”

By the same token, who are these experts who can attest to thousands of cases or water contamination? It certainly isn’t the EPA, which found that the number of instances in which groundwater was affected by the very broadly defined fracking “water cycle” was “small.” But it is important to consider Junior Scholastic’s sources.

Anti-fracking ProPublica has received tens of thousands of dollars from the Rockefeller Family Foundation over the years, the anti-fossil fuel group bankrolling the #ExxonKnew campaign. The article also quotes Union of Concerned Scientists, a group that supports banning fracking.

Sadly, the information presented in this Junior Scholastic article isn’t just fodder for kids to pass the time during study hall. Schools that subscribe to the publication have the option of downloading worksheets, quizzes and review guides. Many schools have incorporated these materials into their curriculum, including schools in Illinois, Massachusetts and New York. Here is one example EID found online, with a Junior Scholastic “Fracking Fight” assignment highlighted in the yellow box. 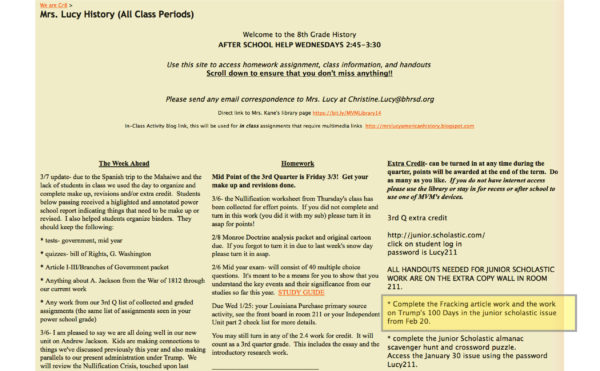 According to Junior Scholastic’s website, it is just one publication from New York, N.Y.-based parent company Scholastic Corporation, which “is the world’s largest publisher and distributor of children’s books, a leading provider of print and digital instructional materials for pre-K to grade 12, and a producer of educational and entertaining children’s media.” In other words, it is no small-time outfit. Interestingly, The New York Times also licenses its content for a high-school themed publication called The New York Times Upfront that is distributed to schools in all 50 states.

Considering what is being distributed across the country in a widely read school publication such as Junior Scholastic, it’s not surprising that the following YouTube video emerged out of Colorado back in 2014.

The video captures Carbondale Middle School students testifying against fracking at an April 17, 2014, Bureau of Land Management hearing. And it is abundantly clear where the students have gotten their anti-fracking information.

One student explains, “At school we’ve been learning about the gas and oil, and fracking. We were watching videos and learning about it. And it sounded quite bad, the things we saw…”

What exactly have they been learning about fracking at school, you ask?

One student explains, “There have been, like, really rare diseases that they’re getting. And it has been proven that some of the chemicals in the fracking fluid have effects on those kind of diseases and stuff. Some of them get cancer, and a bunch of people lately have been getting cancer.”

This typical claim that fracking harms health was recently thoroughly debunked by the Colorado Department of Public of Public Health and Environment’s (CDPHE) landmark health assessment that found that “the risk of harmful health effects is low for residents living [near] oil and gas operations,” illustrating once again the divide between reality and the hyperbolic anti-fracking rhetoric being pushed in schools.

Getting ‘Em While They’re Young — Real Young — in Ohio

As egregious as the prior to examples are, perhaps the most extreme example of anti-fracking indoctrination imaginable took place a couple months back in Ohio.

The Columbus Dispatch revealed — in a supportive puff piece, by the way —that teachers at Little Dreamers, Big Believers daycare forced preschool children to submit public comment to protest fracking around the Wayne National forest,

“The children, whose ages range from 3 to 5 years, gave all kinds of reasons for defending the forest. Trees are pretty. They are good for climbing and spotting bird nests. And they help humans breathe.”

The teachers even went so far as to submit their drawings as “formal public comment” to the Bureau of Land Management. Fortunately, as EID highlighted shortly after the story ran, this action did not go unchecked. The Dispatch published a letter to the editor from a Columbus resident stating that he was “disgusted” that teachers are forcing their personal views on kids. As Michael Federer from the Columbus area said,

“These are children ages 3 to 5. I am disgusted with another example of “teachers” (I use the word loosely) manipulating children to make points about something that the children can’t begin to understand. One teacher said, “This world belongs to them, their day is almost here.” Is she kidding?”

Unfortunately, the manipulation that Federer speaks of is all too common. It is also part of a larger general trend of fracking opponents exploiting children in an effort to advance the narrative that shale development is inherently dangerous — despite complete lack of scientific evidence to support those claims, something EID has documented many times before.

Such efforts may be acceptable if they were based on scientific fact. But they are instead based on outright falsehoods that continue to be pushed by those obsessed with ending fossil fuel development. This is one reason the oil and gas industry has felt compelled to reach out to schools to set the record straight. But ironically, those efforts are being spun by the media as a deliberate effort by the oil and gas industry to employ the dishonest strategy it’s trying to counter.