With anti-fossil fuel activists across the country set to celebrate Earth Day by “marching for science,” Energy In Depth released a new compendium and a new health microsite highlighting peer-reviewed research and studies by government agencies examining the health impacts of fracking.

Sponsors and partners of the march include anti-fracking groups, such as 350.org, Center for Biological Diversity, Union of Concerned Scientists, and NextGen Climate America, and the march will be taking place all over the country, including the West.

“Ban fracking” groups in Colorado, including Food & Water Watch (F&WW), 350 Colorado, F&WW-affiliate Frack Free Colorado, and Be The Change are planning to “march together to share our unified voices against fracking.” In the event invitation for the Denver march, the groups fault Colo. Gov. John Hickenlooper (D) for not “accepting the science behind fracking’s impacts to our health, air, water and climate.” 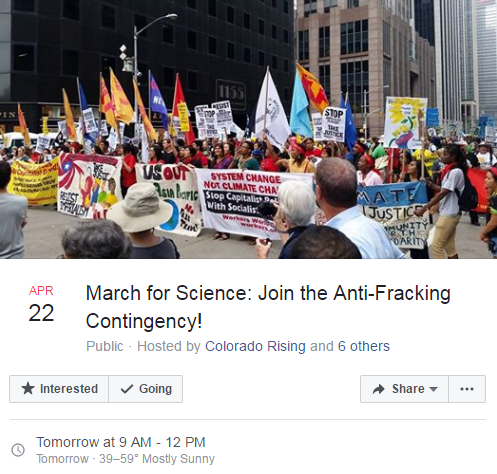 The event invitation for an anti-fracking “march for science” organized by groups opposed to oil and natural gas development, urging followers to “share with your anti-fracking family, friends and neighbors” to “make this an anti-fracking contingency [sic] that can not [sic] be ignored.” Source: Facebook. 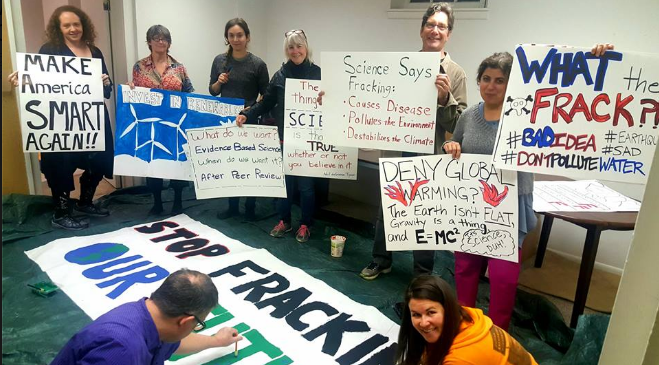 Energy In Depth (EID) has taken the charge in pointing out the use of flawed research in the “ban fracking” campaign here in the state on an case-by-case basis – see EID’s recent coverage of controversial researcher Lisa McKenzie’s latest study here. But to make authoritative research on shale development and public health more easily accessible, EID developed a new compendium that includes data from 23 peer-reviewed studies, 17 government health and regulatory agencies, and reports from 10 research institutions – all housed on EID’s new one-stop-shop health microsite, EIDHealth.org.

The research by regulatory agencies in top oil- and gas-producing states includes Colorado Department of Public Health and Environment’s latest health assessment that determined that “the risk of harmful health effects is low for residents living [near] oil and gas operations,” as well as reports by agencies in Utah and Wyoming.

Collectively, the research included in the compendium demonstrates:

Ever since the first well was drilled decades ago, the oil and natural gas industry has used science, data, and research to make its operations safer and cleaner. EID supports the continued use of science to improve development, and we support fact-based dialogue about operations in the state. But we oppose efforts by activist groups to exaggerate the risks of development and intentionally mislead people through fearmongering and hyperbolic theatrics in order to advance their national “ban fracking” agenda. Just as local communities, business leaders, and local elected officials have repeatedly made clear that anti-energy campaigns have no place in Colorado, manufactured fears and unfounded claims have no place in the debate about our nation’s energy future.