A Boston-based group called Ceres made national and international headlines this week by claiming hydraulic fracturing has put the oil and natural gas industry on a “collision course” with other water users in some of America’s driest states.

But the group’s latest report is highly misleading and concealed key data from the news media and the public showing much smaller water impacts from oil and natural gas operations. The report also presents Ceres as a nonprofit concerned with protecting investors in oil and natural gas companies, when its membership includes environmental activist groups that openly oppose oil and natural gas production.

The recent report builds on a 2013 Ceres paper (debunked here) based on the “Aqueduct” mapping tool of the World Resources Institute. According to a Ceres press release, the WRI data shows “nearly half” of the wells fractured between Jan. 2011 and May 2013 “were in regions with high or extremely high water stress.” Ceres claims this creates “significant long-term water sourcing risks for [oil and natural gas] companies operating in these regions as well as their investors,” and puts the industry on a “collision course with other water users.” 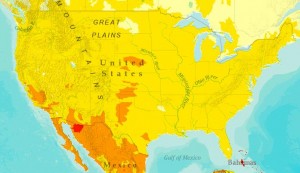 Even more telling, the WRI data show the oil and natural gas industry’s overall water risk is relatively low compared to every other sector examined. The series of color coded maps below show oil and natural gas have a much lower water risk than construction, electric power, agriculture, textiles, food and beverage and other industries:

As Ceres itself notes, “hydraulic fracturing is largely taking place in regions already experiencing high competition for water.”  In Colorado, the oil and natural gas industry used roughly 6.5 billion gallons of water in 2012. That’s a lot of water – but only 0.1 percent of the state’s overall water use. Agriculture and irrigation are two of the largest users, consuming 85.5 percent of the state’s supply. Same goes for Pennsylvania, where a report by Accenture Consulting found of the 3.6 trillion gallons of water consumed by the state annually, “the shale gas industry uses less than 0.2% of that for hydraulic fracturing.”

In fact, the Environmental Protection Agency estimates landscape irrigation consumes roughly three trillion gallons a year. According to the Wall Street Journal, that’s “more than 20 times its highest estimate for the amount of water used annually in fracking.”

The oil and natural gas industry is also investing and innovating to reduce its water use. As the Bureau of Economic Geology at the University of Texas found, about one-fifth of the water used in hydraulic fracturing in Texas is recycled or brackish water, thanks to efforts from various producers. In the Permian Basin, Apache has increased its use of brackish water from the Santa Rosa aquifer as well as produced water, largely eliminating the need for freshwater.

Halliburton Co., one of the largest providers of hydraulic fracturing services across the globe, is using more recycled water and sea water, which means reduced consumption of freshwater, and has set a goal for industry to use an average of 25 percent less freshwater in hydraulic fracturing by the end of 2014. As Ceres even notes, “Anadarko and Shell are buying effluent water from local municipalities. Chesapeake is reusing nearly 100 percent of its produced water and drilling wastewater in the Marcellus region” (p.12).

Some reports have actually found hydraulic fracturing is ultimately helping to reduce the amount of water needed for oil and natural gas development overall. A recent study by researchers at Kent State and Duke University found the use of hydraulic fracturing in the Marcellus shale actually requires less water per unit of energy than conventional wells. In Texas, Bridget Scanlon, senior research scientist at the University of Texas’s Bureau of Economic Geology, stated that hydraulic fracturing is actually making the state more “drought resilient” by “boosting natural gas production and moving the state” away from more water-intensive energy uses.

While the Ceres coalition does include some institutional investors – mostly public-employee pension funds – it also has large number of activist groups that actively oppose the oil and natural gas industry, a fact you won’t find disclosed in the Ceres report. Check out EID’s earlier post on Ceres to see what many of these members – including the Sierra Club, Friends of the Earth, Natural Resources Defense Council, American Rivers and others — have said about oil and natural gas development, including hydraulic fracturing specifically.

Besides these members, Ceres also has many donors — and you may or may not be surprised to learn that they include some well-known funders of anti-fracking activism. According to the group’s last annual report, those donors include the Park Foundation, the Energy Foundation, the Tides Foundation, and the Rockefeller Brothers Fund. But again, that’s something you won’t find disclosed in this report on hydraulic fracturing.

Water use is a serious issue across many states that should be a priority and a concern for communities and businesses alike. That’s why the oil and natural gas industry is continually innovating to reduce its water use impacts, enhance recycling, and use other non-fresh water sources. Unfortunately, Ceres largely ignores that reality and instead distorts facts and figures to create a false narrative that intends to invoke blame on hydraulic fracturing for America’s water stress – no doubt because many of its members and donors want them to say that.

The facts, however, tell a different story.