This week voters in California took to the polls and anti-fracking candidates didn’t do so well.

Ahead of the primaries Senator Bernie Sanders held a press conference in Monterey County in which he repeated debunked activist talking points and vowed he would seek a complete ban on fracking.  Mother Jones immediately speculated that “Environmentalists Could Put Sanders on Top in California Primary” because “Sanders’ message on fracking has the potential to resonate with California Democrats.” Well it did resonate with Democrats – just not in the way opponents of fracking thought it would.

Former Secretary of State Hillary Clinton, who has acknowledged her support for fracking several times in the past, beat out Sanders – the “Keep-It-In-The-Ground” candidate – by more than a 12-point margin, as she has done in several other oil and gas producing states.

In the Fourth Assembly district, with a 2:1 ratio of registered Democrats to Republicans, Republican Charlie Schaupp, who has voiced his support for fracking, won. As Schaupp put it,

The Democrat he will run against in November for the seat, Cecilia Aguiar-Curry, says “the jury is still out on fracking,” for her. But both beat out candidates, like Dan Wolk, who recently said, “Unlike Cecilia, the jury is not out for me on fracking…I am solidly opposed to fracking.”

Yes, a ballot initiative to ban hydraulic fracturing passed in Butte County on Tuesday. This is in keeping with a pattern. You see, Butte County has no oil or gas development and thus no fracking takes place there. A few other counties, like San Benito and Marin have gone on record supporting a symbolic  “ban” on fracking in much the same way Sen. Sanders’ home state of Vermont “banned” a practice that does not take place within its borders. However, in California counties that do have oil development, like Santa Barbara, Kern and Los Angeles, fracking bans have not seen the light of day. In fact, in Santa Barbara County, a measure seeking to ban fracking was defeated 63 percent to 37 percent in 2014.

Facing stunning losses across the country anti-fracking activists have resorted to petitioning the Democratic Party.  On Wednesday, representatives from MoveOn.org, Food & Water Watch, Climate Hawks Vote, and 350.org delivered to the Democratic National Committee platform committee in Washington, D.C. demanding a fracking ban be included on the official party line. 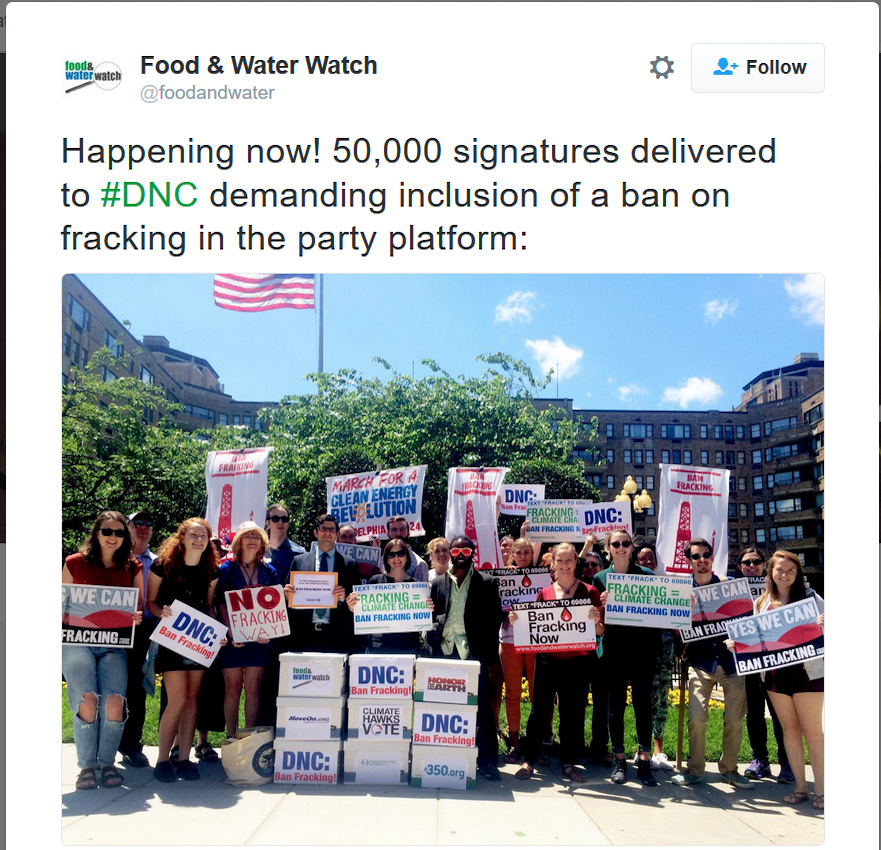 It’s not surprising anti-fracking groups have had to go to such lengths as most prominent Democrats have some out in full support of fracking.

California’s Governor Jerry Brown has shown in his past comments on fracking that California won’t be “jumping on any ideological bandwagons.” And he is not alone in his party in acknowledging these benefits. Here are just a few examples:

Groups like those that handed in the anti-fracking petition this week, represent a fringe opinion, and not the voice of the majority of American people as voters continue to show.