“Benchmarking Air Emissions,” an annual report spearheaded by Ceres and co-sponsored by the Natural Resources Defense Council – both well-known anti-fracking groups – analyzes emissions data for the nation’s 100 biggest power plants, which account for 85 percent of U.S. electricity and 87 percent of the country’s energy-related emissions. The report boasts that energy-related sulfur dioxide (SO2), nitrogen oxide (NOx), mercury and carbon dioxide emissions have all plummeted since 1990 (based on 2014 data, the latest year available), as EID has highlighted several times before.

Surprisingly (albeit tepidly) the report gives props to natural gas:

“Some of the factors driving this trend include energy efficiency improvements and displacement of coal generation by natural gas and renewable energy… Since 2000, emissions from all four pollutants have dropped while total generation and gross domestic product have increased…”

The report even gives natural gas its deserved top billing for contributing to low electricity prices:

“In addition to low electricity demand growth, the major driving forces behind these trends reshaping the electric sector include an abundant supply of low cost natural gas, falling renewable technology costs, and policy support for wind and solar energy resources.”

Perhaps most surprisingly – even as it predictably gives renewables disproportionate credit for reducing air pollution – it discusses these limitations of renewables in terms of electrical generation:

“… But even when cheap renewable resources are combined with supportive state and federal policies, utilities find it difficult to replace the need for traditional baseload capacity. Their biggest problem is storing the electricity they produce for times when the sun does not shine, the wind does not blow, or both.”

Ultimately, the following facts are just too overwhelming for the Ceres/NRDC report to deny: electrical generation has long been the top source of all the aforementioned pollutants, and the increased use of natural gas is the No. 1 reason for these declines, especially considering its share of the electrical generation mix jumped from 22 percent in 2007 to 28 percent to 2014. The following graphic from the report clearly demonstrates this trend. 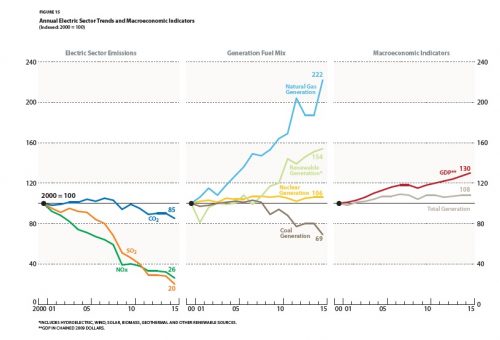 This graphic illustrates how increased use of natural gas for electrical generation has correlated with sharp decreases in emissions of major air pollutants.

Here are some other key takeaways from the report, along with natural gas’ role in making them possible.

Natural gas’ contribution to reduction of these pollutants is huge on two fronts. First, as the report notes:

“SO2 and NOx emissions from power plants both contribute to acid rain, regional haze, and fine particle air pollution.”

Concurring with the findings of the report, EPA data shows that SO2 emissions have declined rapidly in recent years. 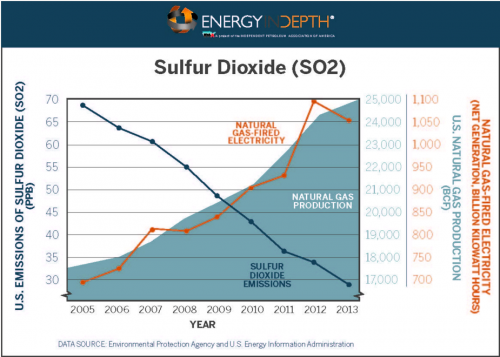 Electrical generation from coal-fired power plants has also traditionally been a primary source of fine particulate (PM 2.5) pollution, which is now in rapid decline thanks to increased use of natural gas. As the report notes, PM 2.5 is considered perhaps the deadliest air pollutant:

The U.S. Environmental Protection Agency (EPA) says PM 2.5 can cause “early death, cardiovascular or respiratory harm,” while World Health Organization (WHO) is even more blunt in its assessment, stating,

Fortunately, U.S. PM 2.5 levels decreased 60 percent from 2005 to 2013, according to data from the U.S. Environmental Protection Agency (EPA) and the U.S. Energy Information Administration (EIA), and this report indicates that trend will continue. 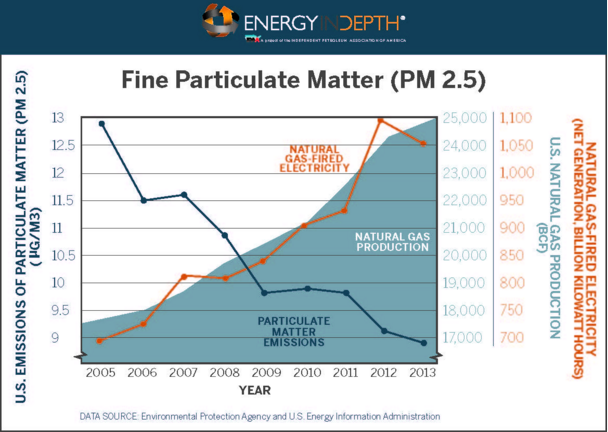 This isn’t surprising considering the EPA says, “Emissions of sulfur dioxide and mercury compounds from burning natural gas are negligible.”

The report notes that mercury emissions from coal-fired power plants “are converted by certain microorganisms to a highly toxic form of the chemical known as methylmercury. Methylmercury then accumulates in fish and shellfish, as well as in birds and mammals that feed on fish. Humans are exposed to mercury when they eat contaminated fish. Exposure to methlymercury is detrimental to the development of fetuses and young children.”

Not only have power plant CO2 emissions dropped another two percent from the levels reported in the 2015  “Benchmarking Air Emissions” study, this year’s report notes the reductions have come at the same time the economy and electrical generation have increased. Though energy-related CO2 emissions are still slightly above 1990 levels, the report notes that CO2 emission rates are actually 16 percent lower than 1990. From the report:

“In the context of the slackening demand, a steady rise in the share of renewable sources of electricity along with an ongoing switch to natural gas from coal and oil has continued to drive down power sector CO2 emissions.”

The report also highlights the fact that CO2 emissions really started to trend down rapidly once the shale revolution took hold last decade, even hinting that increased natural gas use is putting the U.S. on track to meet its Paris climate conference pledge of 26 percent CO2 reductions below 2005 levels:

“Between 2005 and 2014 emissions from power plants declined by 15 percent. Preliminary data suggest that they fell by another 6 percent in 2015 from 2014, leaving them at their lowest level in 22 years, and just 5 percent above 1990 levels. This matters because reductions in the electric sector will be key to achieving the recently established U.S. national climate target.”

U.S. Energy Information Agency (EIA) data illustrates that natural gas is spearheading this trend, noting that switching electrical generation fuels from coal to natural gas accounted for 68 percent of the 14 percent total reduction in energy-related CO2 emissions during last decade. Those reductions have also occurred at the same time the economy grew 15 percent, and thanks to natural gas’ more prominent role in electrical generation, energy production no longer the top industrial source of CO2 emissions. 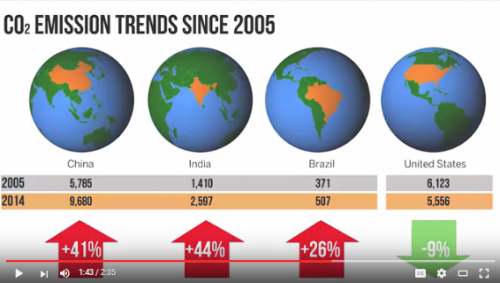 #4. Wholesale Electricity Prices Down 40 Percent Since 2008

Not to be forgotten in all the of the good news regarding power plant emission reductions, made possible by natural gas, is the fact that the report confirms fracking has lowered electricity costs significantly:

“… Wholesale electricity prices – the prices paid by utility companies when they purchase power for their customers and large industrial users–are trending down at major trading hubs across the country. Since 2008, on average, they have declined by 40 percent. This sharp fall in prices is mainly due to record low natural gas prices and, to some extent, the rising share of renewable resources, driven partly by government policies.”

“Because natural gas-fired power plants are often on the margin around much of the U.S., and fuel costs account for a majority of their avoidable costs of generation, electricity prices usually follow natural gas prices.”

“Even though production data seem to indicate that U.S. natural gas production has stagnated and may even be declining, all of the fundamentals point to continued oversupply and low prices in the medium term. The Utica shale formation, a major new source of natural gas that recently came online and is ramping up output quickly, has a breakeven price that may be well under $2 per MMBtu… Others report similar figures at the neighboring Marcellus shale formation. At the same time, U.S. proven natural gas reserves, which stood at 388 trillion cubic feet at the end of 2014, are at record high levels, nearly double the amount from just ten years ago. Even if there was an uptick in prices in the short term, it is likely that additional supply could be brought online relatively quickly. This is because shale gas projects in well-established shale plays require relatively less lead-time to bring online than conventional projects. In addition, there are a large number of drilled but uncompleted wells, and some producers are cutting back output from existing wells in the current low price environment.”

#5. Even better news: Natural gas use for electrical generation has become even more prevalent since 2014

As encouraging as all the data from this report is, it’s important to realize the data would be even more positive if it were more up to date.

Natural gas’ share of the electricity generation fuel mix has continued to skyrocket since 2014, increasing to 32 percent in 2015, according to the 2016 Sustainable Energy America Factbook. It has increase at more than five times the pace as solar and other renewable sources combined from 2014 to 2015. 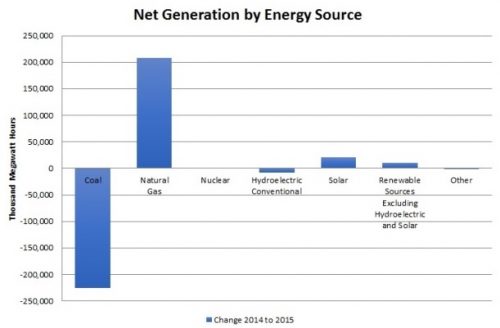 Natural gas also overtook coal as the leading source of U.S. electricity generation for the first time in April 2015 and was the top electrical generation fuel in each of the last six months of 2015. Thanks to this trend, IEA credits natural gas for reducing U.S. energy-related CO2 emissions 2 percent in 2015. EIA also forecasted that natural gas will top coal as the top fuel source for electricity generation in 2016, and so that prediction has been spot-on, as natural gas now accounts for more than 43 percent of the nation’s available installed generating capacity.

The report makes no bones about natural gas’ contribution to continued reduced emissions and low utility prices going forward – a combination that would have been unthinkable about 10 years ago:

“Going forward, in the near- to mid-term the outlook points to the three key trends continuing: power sector CO2 emissions will continue to decline; coal’s share of the U.S. generation mix will become smaller; and, electricity prices will remain beholden to weak demand growth, low natural gas prices, and a growing share of renewables.”

It would have also been unthinkable that a report spearheaded by Ceres and co-sponsored by NRDC would have such pleasant things to say about natural gas.

NRDC has referred to fracking as nothing short of a “disaster,” and has the following to say about the climate benefits of natural gas on its website:

“Meanwhile, the gas industry is feeding us a storyline about how beneficial natural gas is, calling it a bridge to a clean energy future that will help us solve global warming. Not so fast.”

Ceres has the following to say about fracking on its website:

“Hydraulic fracturing—“fracking”—has been a truly disruptive technology, both in driving the     growth of the “shale revolution” and through the profound risks it poses to America’s water   resources.”