API Report: Amidst Shale Revolution, Industry Safer Than It’s Ever Been

The American Petroleum Institute (API) released a new report last week that discusses the long history of hydraulic fracturing in the United States and forecasts the outlook for the future. Spoiler alert: the best may be yet to come. And as the report notes, even as fracking continues to establish the U.S. as a global energy superpower, the industry is as safe as it has ever been due to a continued commitment to responsible development.

Though fracking has only been part of the general public discussion the last 10 years or so, the API report notes the well stimulation practice was first used in the United States in 1947 and was being used more than 3,000 times per month by the 1950s to improve the productivity of oil and gas wells across the country while the U.S. economy boomed in the post-World War II era. But it wasn’t until the 1980s that the practice was paired with horizontal drilling to revolutionize the production of natural gas and oil from previously inaccessible shale formations.

Flash forward a quarter century or so, and the U.S. finds itself an oil and gas powerhouse thanks to improvements in the technology pioneered by George Mitchell. In 2012, the U.S. passed Russia as the world’s biggest producer of these critical commodities, and it wouldn’t have been possible without fracking. By 2015, fracking techniques were being used to produce two-thirds of America’s natural gas and half of the country’s oil. The practice has been used on two million natural gas and oil wells since being introduced to the energy industry, according to the API report.

Continuous developments and technological improvements have also shortened the process of drilling and constructing a well to between 50 and 100 days. Once a well is safely constructed, the hydraulic fracturing process can be completed in less than five days. This is a remarkably efficient process considering wells can produce for 20 to 40 years — 29 times longer than it typically takes to bring them into production.

The report also describes how the industry prioritizes responsible development, with the most notable example being a detailed illustration of steps taken to protect groundwater. Seven layers of alternating steel and concrete are used to line the walls of a well, securely insulating any surrounding groundwater from oil, natural gas, and any other substances found underground or used to stimulate the well.

These impenetrable walls can include up to three million pounds of steel casing and cement, stretching anywhere from 6,000 to 10,000 feet below the Earth’s surface. 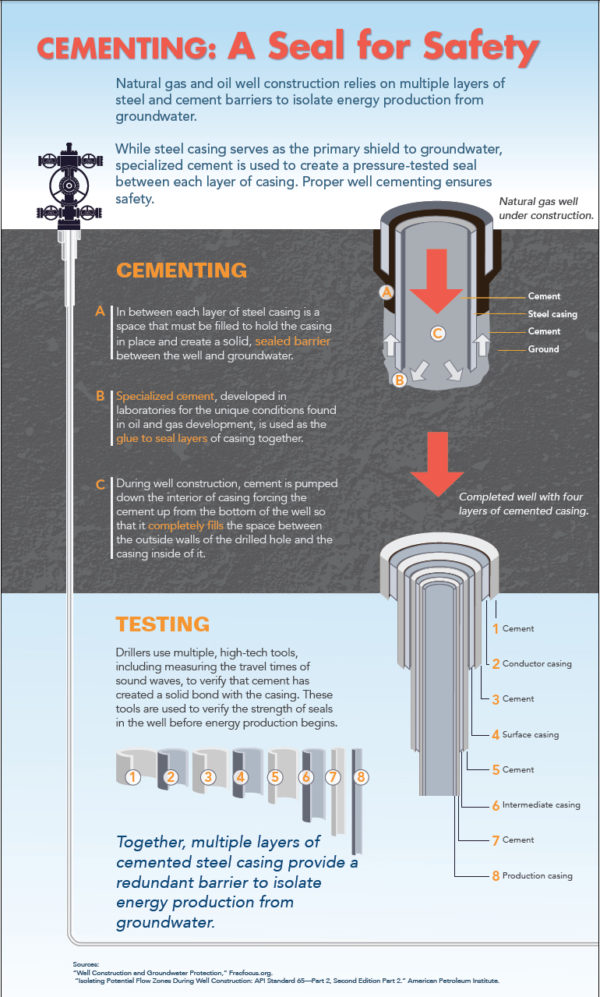 Despite making tremendous strides, shale development isn’t slowing down. With record production forecast in the coming years, the U.S. is not only exporting crude oil at a record pace. We are also poised to become a net exporter of liquefied natural gas thanks to the abundance of natural gas produced by fracking, as the following graphic from the report illustrates. 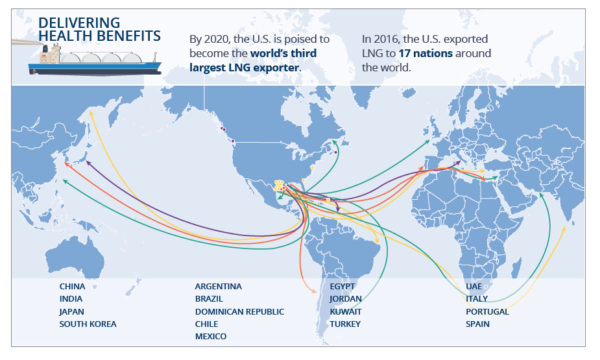 The report also details how communities near development will continue to see financial benefits. For instance, several Texas counties saw 70 percent or more of their tax revenue come from the natural gas or oil industry in 2015, according to API’s report. As fracking continues to be a success story, more communities will be able to tap into this American phenomenon to fund their schools, hospitals and other civil services. The industry also has a history of spurring job creation, both at drilling sites and in many other areas of the surrounding economy. But even people whose careers and communities are not directly connected to shale basins have benefitted. The average driver saved $550 on gasoline in 2015 thanks to increasing domestic production and diminishing prices at the pump, and that trend is only going to continue.

Remarkably, amidst all this production and economic growth, the industry has reduced methane emissions at the same time production has increased, as the following graphic from the report illustrates. 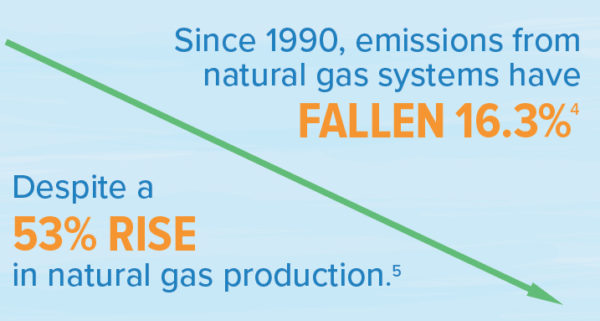 And increased use of clean burning natural gas made abundant by fracking has allowed the U.S. to be the only developed nation to reduce carbon emissions, as the following graphic illustrates. 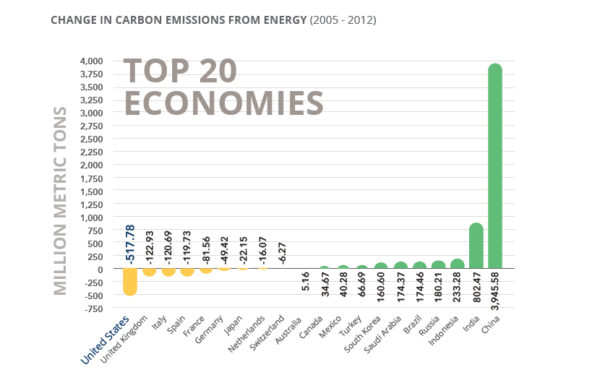 Similarly, the industry has improved its worker safety record at the same time the shale revolution has sent production numbers through the roof. As the following chart illustrates, the injury and illness rate for U.S. natural gas and oil industry workers fell 45 percent from 2006 to 2015 and remains well below the national average for the entire U.S. private sector. 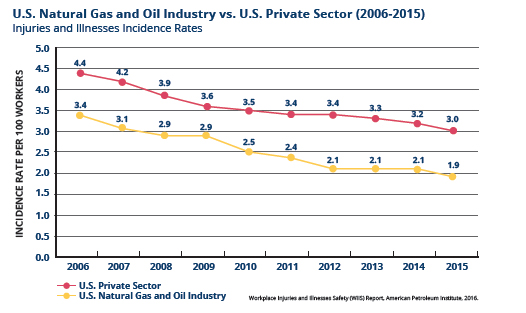 All in all, there is no refuting the fact that fracking has bolstered domestic energy production and economic growth. And as this report shows, there’s no reason to doubt it will continue to be a safe, profitable venture for our future.