The American Petroleum Institute (API) presented the findings of its 2017 State of American Energy report to policymakers and industry experts Wednesday at its annual State of American Energy address. And the key takeaway from both the address and the report is that while the state of American energy remains remarkable, the best could be yet to come — so long as the incoming administration adopts pro-energy policies and alleviates regulatory burdens that have impeded the industry’s full potential in recent years.

API President and CEO Jack Gerard’s keynote address focused on the fact that energy is fundamental to how we operate as a society at any given hour of the average day or night (see graphic below), and noted it will be the incoming administration’s duty to ensure the safe, reliable and consumer-friendly production and delivery of oil and natural energy to the American people moving forward.

According to the report, 80 percent of Americans support increased energy infrastructure development. With this in mind, Gerard emphasized it would behoove the Trump administration to take seriously the needs of the country’s pipelines and roads, making oil production and transport safer and more efficient.

Gerard made it known that one of the biggest hurdles with the last administration was overregulation of the energy industry, and he was not shy to point out his contempt for government overreach and the “Keep It In The Ground” (KIITG) agenda — particularly its stated goal of stopping infrastructure projects in 2017:

The State of Energy Today

The new API report notes that the 21st century energy revolution has come as a result of more efficient and effective energy production and refining. Advances in technology — specifically hydraulic fracturing and horizontal drilling — have positively impacted the lives of Americans over the last decade, driving down costs and creating a cleaner environment. From the report:

“According to a 2016 estimate from AAA, America’s drivers, on average, saved more than $550 on gasoline in 2015 due to increased production from hydraulic fracturing and horizontal drilling. And an analysis by EIA shows that since 2008, roughly the start of the energy renaissance, average annual energy costs per household in the United States have dropped by more than 14 percent.” (p. 8)

On the flipside, while Americans have been afforded an increase in consumer-friendly energy, many developing nations still struggle to do the same. American leadership could help propel billions of people living without reliable electricity and adequate cooking facilities into more modern dwellings. From the report:

“The International Energy Agency estimates that more than 1.2 billion people, or 14 percent of the world’s population, lack access to electricity, and twice that many, 2.6 billion, live without clean cooking facilities. In fact, according to a 2013 study in The Lancet, roughly 3.5 million people, mostly women and children, die every year from respiratory illness as a result of indoor air pollution created by wood and other biomass stoves.” (p. 8)

And as Gerard pointed out in his address, fossil fuels will continue to lay the foundation for the world’s energy needs. According to EIA projections, worldwide energy consumption will increase 48 percent by 2010, largely due to opportunities in developing nations, and 78 percent of this demand will be met with fossil fuels, as the following graphic from the report illustrates. 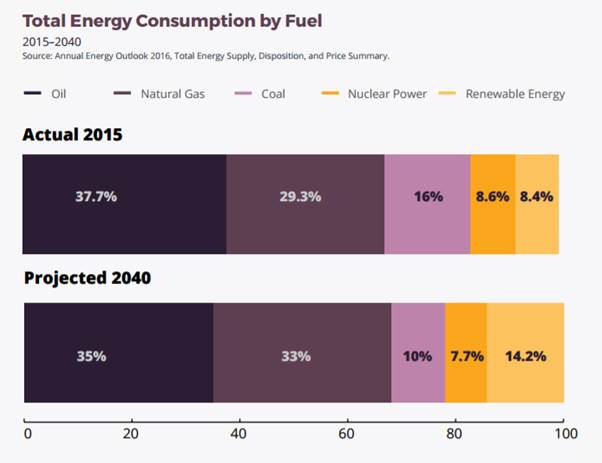 API’s 2017 report also outlines ways for us to move forward. As the U.S. has proven over the last decade, increased energy production and consumption does not necessarily mean increased environmental impacts. Time and time again the energy industry has disproven myths and assumptions about the negative impacts of fossil fuels, and fortunately, Americans do not have to choose between an abundant energy supply and a clean environment. Even as energy production has significantly increased, air pollutants — particularly criteria pollutants such as nitrogen oxide and sulfur dioxide — have decreased dramatically due to increased natural gas use for electrical generation, as have greenhouse gas emissions (p. 18) as the following graphic from the report shows. 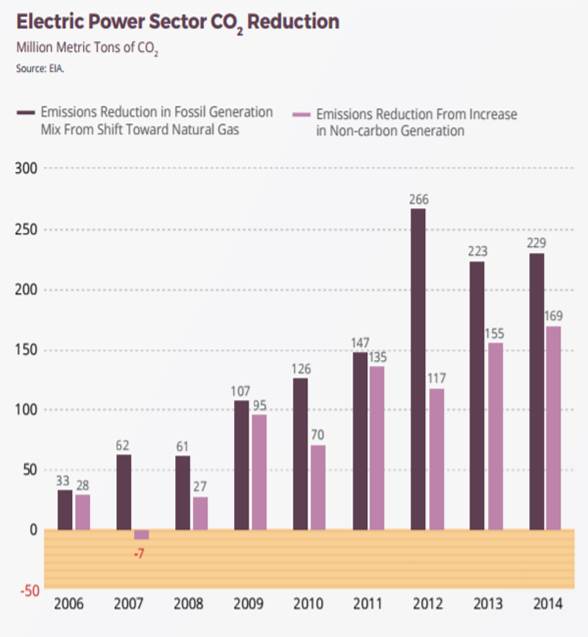 So, after having to endure an administration that kept the industry’s hands tied with some 145 regulations, API is looking forward to collaborating with a new president and Congress, and believes it is high time that America start to embrace its potential position as a global leader in energy production. From the report:

“Unlike their predecessors of just a few years ago, (the new administration) will inherit a country that leads the world in energy production with a growing population, an expanding economy and a cleaner environment, thanks to natural gas and its impact on declining emissions of criteria air pollutants. The natural gas industry has supplied the growth in natural gas use that fueled the expanding economy and made these emissions reductions possible, all while reducing its own emissions.”

As the following charts from the report illustrate, the U.S. has managed to increase crude oil production 88 percent and natural gas production 46 percent over the past decade despite a challenging and often duplicative regulatory environment. 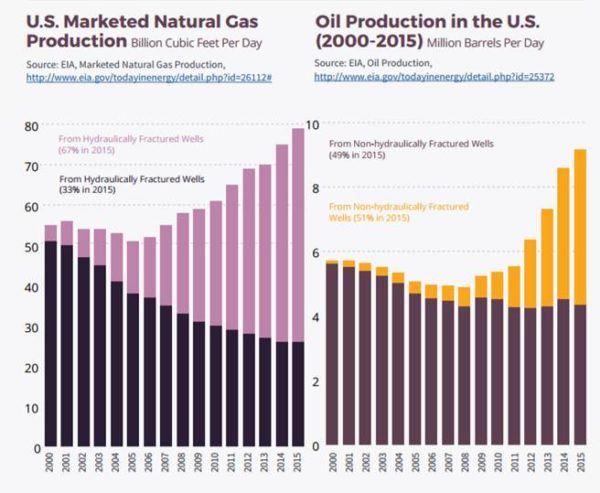 America also has the opportunity to expand its reach by way of energy exports. The API report concludes, “In 2014, the number of nations buying American crude oil was eight. In 2016, after export restrictions were lifted, that number rose to 22” (p. 36). In addition, over the next five years, the United States is projected to become the world’s third-largest LNG supplier. According to API, “LNG exports could contribute up to 452,000 jobs nationwide between 2016 and 2035 and up to $73.6 billion annually to the GDP (p. 38),” further substantiating the case for the country’s need to continue moving forward making robust strides in this industry.

Imagine what these numbers could be if more regulations were lifted and processes were simplified.

The API report clearly shows that America is well positioned to lead amongst international competitors, so long as the new administration ensures we transform the energy and natural oil industry back into a consumer-friendly market.