A the recent Harvard Business School report noted the importance of addressing the skills gap to prepare for the tens of thousands jobs that are being created by shale development.

In Ohio, one of the tools to address that challenge can be found in the many apprenticeship programs and vocational schools throughout the state. One skilled trade that is absolutely vital in preparing our workforce for jobs coming in pipeline and related infrastructure is welding. Local 396, Plumbers and Pipefitters has been preparing students for career pathways in the oil and gas industry, particularly in welding, for the past few years. The union recently invited United States Senator Rob Portman to tour their facility.

Senator Rob Portman toured Local 396, Plumbers and Pipefitters apprenticeship training program and learned about how the oil and gas industry is supporting local jobs. With over $8 billion in pipeline construction announced in Ohio, the residents of the state are gearing up for over 3 million work hours coming to local communities. 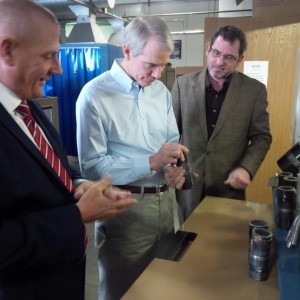 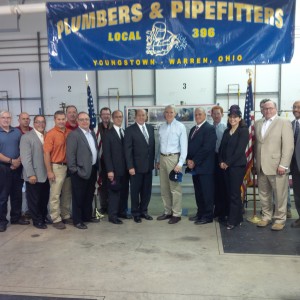 Senator Portman reported exclusively to EID, “I was glad to see firsthand the important work being done at the Plumbers and Pipefitters Training Center,” Portman stated. “We had a good discussion on their training as well as the positive impact the energy industry continues to have in the Mahoning Valley and eastern Ohio.”

Ohio’s Utica Shale development has prompted a surge in infrastructure announcements, such as pipelines and processing plants, which have had a tremendous impact on the entire state. This development is driving down unemployment, bringing millions to the coffers of local governments, and supporting millions in wages to the building trades. While the union noted that they are currently experiencing some stagnation, they fully expect their work to be increasing as more and more pipeline work comes online. In addition, the union is looking forward to the possibility of a new ethane cracker and, indeed, a manufacturing renaissance, which is burgeoning in Ohio.

Local 396, Plumbers and Pipefitters’ apprenticeship training program is yet another reminder of just how important the oil and gas industry has been in creating jobs and growing the economy in Ohio.