With the campaign to ban fracking in Colorado failing every step of the way, anti-fracking activists have retreated to Boulder, where they descended on a County Commissioners’ hearing to decide whether to extend a current fracking moratorium that was set to expire this Friday.

While the commissioners voted to institute what they are calling a “temporary emergency moratorium” on fracking in unincorporated parts of the county, the decision to side with anti-fracking activists is so extreme that the county’s own staff was warning against it. As the Longmont Times-Call reports:

“However, Land Use staffers and the County Attorney’s Office also have recommended that the Board of County Commissioners not extend the current moratorium.

But as EID has reported before, anti-fracking activists in Colorado have a history of showing little regard for the law in pursuit of their extreme agenda. True to form, 350.org activists wasted little time in clouding the hearing with extreme rhetoric, even comparing current oil and gas regulations to slavery laws in an email to supporters, urging them to “stand up against” the law:

“While we acknowledge the Supreme Court’s ruling last spring that local governments cannot place extended moratoria or bans on fracking, we must also remember that many other oppressive policies, such as slavery and women and people of color not having the right to vote, have at times in history been the rule of law, and that it is our duty to stand up against unfair laws – in court if necessary.” 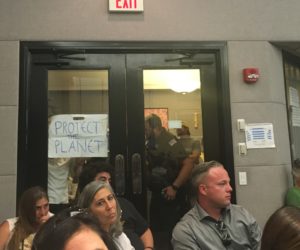 Activists had to repeatedly be asked to remain quiet and audibly booed and hissed at representatives of the oil and natural gas industry despite repeated calls from Commissioner Elise Jones to create a “safe space” for all viewpoints. 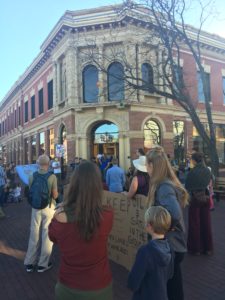 Meanwhile, a small crowd of activists gathered outside the hearing to hold a “Keep It in The Ground” rally on the Pearl Street Mall, showing that the groups behind the protest are far more interested in permanently banning oil and natural gas development than supporting the temporary moratorium that was the focus of the hearing.

One ban fracking activist affiliated with the Community Environmental Legal Defense Fund (CELDF), a group that has boasted that bankrupting a community as a result of a fracking ban “might be exactly what is needed” also showed that these groups are only interested in an all-out fracking ban. As the Longmont Daily-Times reports:

“I urge the commissioners to ban fracking in Boulder County.”

The commissioners will take a final vote on the moratorium later this week. But perhaps more importantly, today’s hearing makes clear that Colorado’s core group of professional anti-fracking activists remain committed to driving the industry out of the state, no matter what the law says.