Speaking at a Greeley campaign event over the weekend supporting his run for Governor, Congressman Jared Polis (D-Boulder) told supporters he would not be supporting anti-oil and gas ballot measures, explaining the measures would be too “rigid.”

The Greeley Tribune reported that during the “Polis for Colorado” Greeley office grand opening over the weekend, an “audience member read from her phone on behalf of a group protesting a well site near Bella Romero Academy. She wanted to know Polis’ stance on oil and gas setbacks in the state.”

“’Health and safety should come first,’ he said, ‘but there needs to be flexibility for landowners who want to permit oil and gas production closer than a rigid setback might allow.”

The announcement was yet another blow to backers of such measures, who once counted on Polis for significant funding. In 2014, Polis backed statewide anti-fracking ballot initiatives but pulled his support after Gov. Hickenlooper described them as “radical” and “extreme measures that would drive oil and gas out of Colorado.” Facing opposition from fellow Democrats and a large swath of the state’s business community, Polis eventually dropped his measures in exchange for a task force alternative in August 2014. But he hinted in 2016 that he might revive his financial support for “ban fracking” ballot initiatives – initiatives that ultimately failed amid controversy regarding forged signatures and a failed publicity stunt.

With Polis’ recent outright rejection of the ballot measures, every major Democratic and Republican gubernatorial candidate has now announced opposition to the measures. At the recent Colorado Association of Commerce and Industry governor candidate forum, Polis was the only candidate not to provide a firm response to the question of setbacks.

The reaction from anti-fracking activists to Polis’ weekend statements is one of betrayal and that Polis has “left the citizens of Colorado out in the cold, stealing the signatures that the citizens of Colorado had collected — money in politics.” “Keep It in the Ground” and infamous “Wrong Door” anti-fracking activist group East Boulder County United had the following response to Polis’ new policy position: 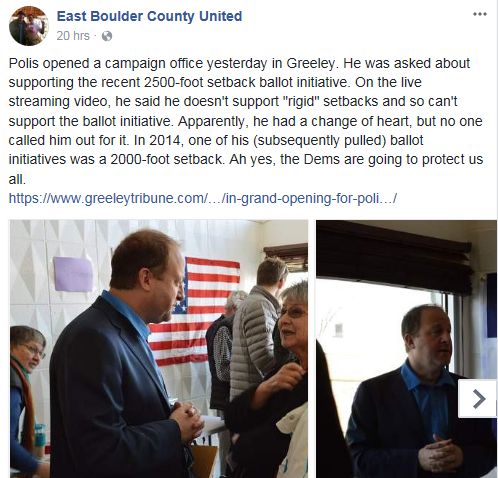 Candidates running for office say a lot of things. But Polis’ efforts to rebrand from fringe anti-fracking backer to “we don’t talk about that anymore,” is a hard shift, even for a multi-millionaire who is largely self-funding his campaign. Similarly, if inching away from the fringe side of the Colorado fracking debate isn’t hard enough the “Polis for Colorado” campaign, rebranding efforts that stake everything on an energy platform based off of a ‘Magic Thinking’ theory promising statewide 100 percent renewable energy by 2040 can’t possibly be the easiest sell, either.