Atlantic Sunrise Pipeline Will Bring Jobs and Revenue to Pennsylvania

A new study by researchers at Penn State University, released today, finds that the Williams’ Atlantic Sunrise Natural Gas Pipeline Project – an expansion of existing Transco pipeline – will create 8,000 new jobs and have a $1.6 billion impact on the economy.   As the press release explains,

“Construction and ongoing operations of the project look to be economically beneficial to the counties the pipeline would cross, as well as to Pennsylvania and the region,” said Associate Professor Seth Blumsack, John and Willie Leone Family Department of Energy and Mineral Engineering, Pennsylvania State University.

Atlantic Sunrise will travel across 10 counties in Pennsylvania and, according to the study, will have an enormously positive economic impact in the state:

Once the pipeline is up and running, the project will generate 29 new and permanent full-time equivalent positions and $1.9 million in added value in the operating areas of the pipeline. Also from the press release:

“Penn State’s report clearly shows how vital this project and others like it are for Pennsylvania’s economy,” said Pennsylvania Chamber of Business & Industry President Gene Barr. “We need to take advantage of all of our natural resources, and the best way to do that is through more gas infrastructure. The Atlantic Sunrise expansion to the Transco pipeline is projected to support thousands of jobs during construction and thousands more in the drilling and supply chain industries. All told, we are looking the potential for more than a billion dollars of economic activity as a result of this project.”  (emphasis added)

The following chart from the report breaks these figures down by the impacts in each individual county: 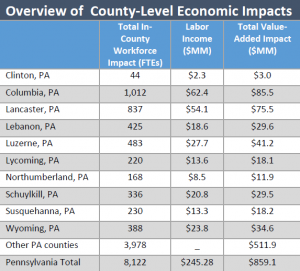 In addition to the benefits already described, this pipeline will mean major savings for consumers it services. Also from the press release:

“Anyone who has experienced a spike in their heating bills understands the importance of this project. There is a critical need for additional pipeline capacity in the region so that northeastern consumers can realize the full benefit of lower-cost energy,” said Transco General Manager Frank Ferazzi.

When complete, the Atlantic Sunrise will deliver gas from Susquehanna County, Pennsylvania to consumers as far south as Alabama. According the study:

“Over the 30-month period the study estimated that consumers served by the Transco pipeline from Alabama to New Jersey would have enjoyed about $2.6 billion in total benefits because of the access to the Marcellus basin facilitated by the Atlantic Sunrise expansion.” (emphasis added)

Background on the Atlantic Sunrise Project

The 10,200 mile  Transco pipeline has been in operation for decades and currently delivers about 10 percent of the nation’s gas to markets in Pennsylvania, New York, New Jersey, states along the East coast, and as far south as Texas. With the surplus of natural gas coming out of the Marcellus, this pipeline is currently delivering gas from the Northeast to the South for the first time in its long history. Not only has there been a directional shift, but there’s also an increased demand to bring more natural gas to these markets—and pipelines can only hold so much at any given time.

How will the Atlantic Sunrise help?

This project, if approved by the Federal Energy Regulatory Commission (FERC), which oversees interstate pipelines, will add enough capacity to the Transco pipeline to provide natural gas to 7 million American homes daily. It will involve replacing two and a half miles of existing pipeline, adding 178 miles of new pipeline, adding 12 miles worth of pipeline to two new loops, as well as additional infrastructure to move the gas.

Here’s a map from the Atlantic Sunrise website showing how this will look with the existing Transco: 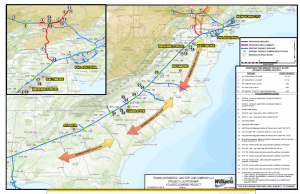 Also, be sure to check out the following video with additional information about the project and how Williams will use existing infrastructure corridors whenever possible and work with landowners to design the best route for all involved.

The United States is currently seeing a surplus of natural gas across the country and shale plays like the Marcellus continue to have record breaking production figures. Never before has the need for infrastructure been so great, and projects like William’s proposed Atlantic Sunrise pipeline will be instrumental in delivering that gas to markets. And it will do it while adding thousands of jobs and increased revenue across Pennsylvania.