Back to Oxford: The Natural Gas Tour Down “No Facts Lane”

We have been covering the events in Oxford (Town and Village) pretty thoroughly over the last few weeks (and here, here, here, here and here).  If the Village of Oxford passes a moratorium, it will be the only municipality in Chenango County to do so and could impact surrounding municipalities such as the Town of Oxford, which have left decisions with landowners and the DEC.

Last week the Oxford saga continued when some members of the Oxford Village Planning Board and also the regular village board went on a tour of natural gas wells in Pennsylvania with local Susquehanna County activist, Vera Scroggins. The tour took members of the Village of Oxford boards all over Susquehanna County, for a fee of $15, to see drive-by views of natural gas operations and speak with residents. 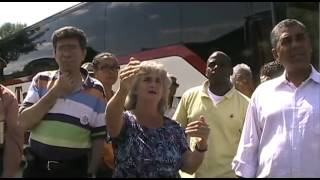 The first stop involved a talk with with a woman near Franklin Forks. Please read this post John wrote recently going through the facts about the ongoing investigation in Franklin Forks.  Check out the video below and pay particular attention to the following:

(5:00) One of the declared uses of the $15 fee is to buy water for the Mannings in Franklin Forks, 55 gallons in this case.  The tour began by dropping off this water for the family.  This is a cute but meaningless gimmick, given that a water buffalo has already been provided by WPX in the extremely unlikely event their actions caused this problem and Pennsylvania DEP has said the family can resume use of their water for bathing and other uses.  It’s all about the show with Vera!

(28:00) Scroggins discusses not being allowed on well sites and other private property. Well sites are private property and as such, visitors must register the same as one would when visiting a factory or other places of business. Scroggins is not employed by any company within the industry and cannot simply walk onto a location, although she tries time and again. She also goes on to explain water recycling. Some members on this tour went on a previous tour with Cabot Oil and Gas where they were able to see how water is recycled first hand.

Scroggins claimed people are moving out of Pennsylvania and into New York because the fish are dying and the people don’t agree with natural gas exploration.  The truth is New York State is actually losing hundreds of thousands of people every year because they cannot find work or afford to live in the state.   Also, home values are anything but diminishing in Pennsylvania, as we demonstrated on these pages just a few short days ago.

The next thing Scroggins hit on was the supposed impact of natural gas development on dairies and, via that connection, human health.  There is no serious data indicating any causation or correlation between natural gas, dairies and human health.  Rather, the health impact study in Dish, Texas shows cancer rates have actually decreased as natural gas exploration has increased.  When she finished trying to scaring her visitors on that subject, Scroggins then discussed a restaurant with some water problems. The restaurant uses bottled water for everything, so there is no issue with the condition of their water regardless what it is.  More to the point, however, Scroggins didn’t mention these problems long predated natural gas development in the area.  Like so many of our opponents, she takes any problem she can find and assigns blame to natural gas.  It’s as intellectually dishonest as it gets, but that’s Vera.

One woman who went on the tour assumed the heavy plastic protective layer used on natural gas well pads  was there because there had been a spill.  If she had gone on a real tour of a development site, she would have been told it is there for preventative measures and ensures environmental safety.

Water withdrawal was also discussed by Vera’s tour goers. They weren’t told natural gas use puts more water into the hydrologic cycle from combustion (which recombines the hydrogen in methane with oxygen in the atmosphere to create H2O) than is required to get it out of the ground.  Likewise, they weren’t told the Susquehanna River Basin Commission regulates water withdrawal from the Susquehanna River and will not permit withdrawals when water levels are too low.  They also discussed how much water is used to hydraulically fracture a well. What they failed to mention is the well is only hydraulically fractured for a short period.  Gas companies do not use millions of gallons of water at each well site, every day, all year long, but that’s certainly the impression Vera tries to give her tour guests.

Moving on with Vera’s show, the audience was shown a picture of a well site in the distance, as if it were a blot on the landscape.  It was hard for the audience to even find the natural gas well in the distance because of all the trees, of course.  The phrase “you can’t make this stuff up” came to mind.

The audience jumped in to comment.  One woman who went on the tour complained she had horrible breathing problems after she went to Pennsylvania. She said it was terrible.  That will come as surprise to people who actually monitor air quality and recently came out with this story: “Air in Pennsylvania is Best Ever, but Metro Areas Among Country’s Worse.”  This woman, coincidentally, admitted she lived in the city for years.  Funny, isn’t it, how these folks never seem to grasp the utter silliness of their utterances?

Another audience member talked about the traffic, arguing natural gas workers don’t care about traffic.  The reality is this; drivers’ jobs depend on ensuring public safety on the roadways, companies enact their own speed limits and routes to minimize impacts and Scroggins herself even described fresh water impoundments being used to pipe in water and reduce traffic. 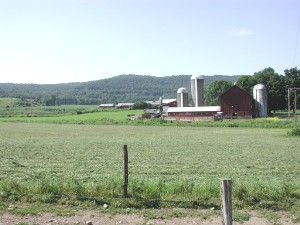 It was clear, from these contrary views, the board members were going to take whatever they wanted to hear from the tour.  Not once during the presentation did anyone mention speaking with a worker on site or talking to an engineer.  No one mentioned speaking with local business owners to see how they felt about natural gas development. The fact was, there were no facts. While they did speak with the one landowner who said she had experienced water well problems, she also said her water was fine now and she had no complaints.  That was the closest Vera’s tour got to the real facts.

The Village of Oxford Planning Board has given their recommendation (on a 3-1 vote) that the village should enact a moratorium on natural gas development.  The village board has not yet taken the vote, but will in the weeks to come.  Unfortunately, many of the planning board members did go on the tour with Cabot Oil and Gas.  They have chosen instead to rely upon information gained from a tour where not one expert was interviewed and nearly everything that was said is demonstrably incorrect.  It is any wonder the Binghamton “moratorium” got thrown out by a judge obviously impatient with the antics of such leadership and lawyers like David Slottje who prey upon it?