A new round of news reports detailing how anti-fracking initiative backers delivered a lot of “half-empty boxes” is casting even more doubt on whether the groups managed to gather enough signatures to place a pair of ballot initiatives before Colorado voters this fall. Denver’s CBS 4 reports:

“The future of two anti-fracking measures that could change the state’s constitution are in doubt. Petitions for initiatives to be placed on the November ballot were due to the Secretary of State’s Office on Monday. But on Tuesday the office had an abundance of empty boxes after scanning and submitting the petition forms.”

The news broke after Colorado Secretary of State Spokeswoman Lynn Bartels tweeted a photo of a stack of empty boxes, observing that backers of Initiatives 75 and 78 “turned in lots of boxes with very few petitions in them.” When asked by the media about the photo that the Greeley Tribune  described as “about 50 boxes,” Bartels called it “unusual.” Also from CBS 4:

“It is unusual because other measures that were turned in, the petitions were scanned in by our staff and put back in their original boxes to be sent down to Pueblo to the state agency to be checked and they maybe had five boxes left over. This was boxes and boxes and boxes. That may not mean anything but it may mean something,” Bartels said.

One of the groups behind the initiatives, Frack Free CO, published an online video showing activists transporting quite a lot of apparently light boxes: 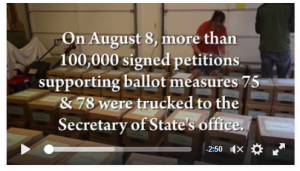 Activists even boasted they had collected so many signatures that they needed a U-Haul truck to deliver them. Surely if they had used the requisite number of boxes a gas guzzling truck would not have been necessary! Not to mention all the trees killed to make those extra 50 boxes, but we digress. 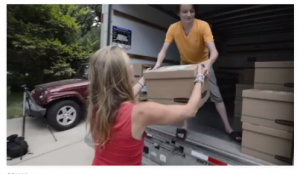 Everyone was able to carry two to three boxes supposedly loaded with signatures without any apparent strain on their backs. 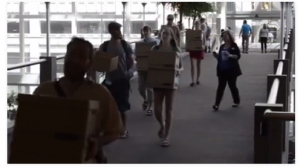 But, of course, anti-fracking groups have a reputation for these kinds of media stunts. In North Carolina, activists staged a delivery of “50 boxes” they said were signed by fracking opponents to Governor Pat McCrory’s office – the only problem was that 44 of them were empty! 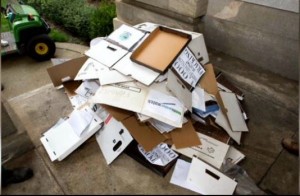 Not only did they deliver empty boxes, but they left a huge mess that state employees had to clean up. According to the Governor’s spokesperson:

“Today’s petition drop-off is nothing more than the 44 empty boxes that this left wing group showed up with — a stunt trying to deceive the media and public,” Ellis said in a statement from the governor’s office. “Unlike this extreme political group, the governor’s office cares about the environment and we will devote our time to cleaning up and recycling the mess of empty political props that were left behind.”

And in Colorado, the same groups behind the initiatives even attempted to lobby Denver officials with petitions they proclaimed came from 2,000 members of the “Denver community” who had indicated their support for anti-fracking measures – either through signatures or by posing for photos.

The only trouble was that an EID analysis found that 400 of the signatories came from outside the City and County of Denver. And some signatures on the petition came from as far away as Auckland, New Zealand, Calgary, Canada and Salisbury in the United Kingdom. Additionally, the packet delivered to local officials included nine blank signature pages. And the Denver Post took note of the trend:

Only time and signature verification will tell if activists were able to gather the requisite number of signatures to place their measures on the ballot. But as more and more information about their signature gathering efforts trickles out, it is looking as though this might just be another failed media stunt to add to an already long list.

ban, Colorado, Hydraulic fracturing, Keep It In The Ground