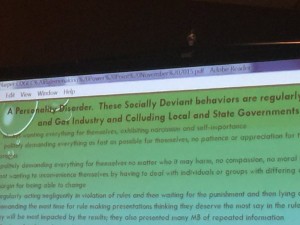 Representatives of national activist organizations backing a ballot initiative push to ban oil and gas development in the state, used a Colorado Oil and Gas Conservation Commission (COGCC) rulemaking hearing as an opportunity to make a series of bizarre demands and accusations that left many people in the audience shaking their heads.

Of note was an appearance by perennial ban-fracking activist, Lauren Swain, who spoke as a representative of 350.org Colorado. Swain’s testimony was notable for her request to abolish the COGCC, the body chiefly responsible for regulatory oversight of oil and gas development in the state.

Billing her suggestion as a “positive way forward,” Swain’s testimony got right to the point:

“We need to act immediately to keep reserves of fossil fuels, oil and gas, in the ground.”

And she also announced that her organization will lobby to eliminate Colorado’s oil and gas regulatory body:

Swain’s testimony should come as no surprise given her ties to numerous national activist organizations and leadership role in Coloradans Resisting Extreme Energy Development (CREED),a group that states they are “moving forward with ballot measures aimed at protecting Colorado from the dangers associated with fracking operations.”

Next up was an activist who accused the oil and gas industry of having a “personality disorder” and of being “socially deviant.” Amanda Harper, partially explained her reasoning for these accusations as the industry engages in “positive public relations campaigns.” The media in attendance quickly took note:

While activists continue to demonstrate how marginalized they are by these outrageous comments, many others in attendance testified in support of the industry. One La Salle area farmer described how he lives and works alongside oil and gas development everyday:

“I want to compliment you, the industry for all of the innovations; these are all items of technology that will help everybody.”

In contrast, activists representing national organizations seemed only interested in furthering their scare campaigns. Meanwhile, they are being debunked almost every day, most recently by a Denver Post editorial which highlighted a slate of new studies demonstrating that fracking is not contaminating drinking water:

“Such reports haven’t seemed to matter to the green anti-fracking groups that continue to trumpet the alleged dangers to drinking water from oil and gas drilling. But the reports at least ought to reassure the public, which is often caught between wildly divergent claims over fracking, on this one area of bitter contention.”

With all the facts against them, could activists be making more and more outrageous claims in a desperate attempt to get attention? Sure looks like it.