Year in Review: The 9 Biggest Fracking Stories of 2014

Unquestionably, the U.S. oil and natural gas boom — made possible by technologies like hydraulic fracturing (“fracking”) and horizontal drilling — has been a boon to the American economy. With 2014 winding to a close, we decided to take a look back at some of the biggest energy developments of the year.

1. U.S. Oil Production Rises to Highest Level Since February of 1986

Advances in drilling technologies have unlocked massive new resources across the country. Because of this, in October, oil production in the United States was at its highest level in nearly three decades, as the following chart from EIA shows.

By next year, the United States is projected to overtake Saudi Arabia as the world’s largest oil producer.

This chart from the EIA, released last year, tells the story quite clearly.

The U.S. Energy Information Administration reported this year that through August 2014, U.S. light crude oil imports declined by 71 percent compared to 2010 levels. The U.S. shale boom is the driving force of the resurgence of domestic oil and gas production, thereby resulting in lower net imports of crude oil. According to the EIA, U.S. oil production increased from five million barrels per day in 2004 to nearly nine million barrels by 2014. 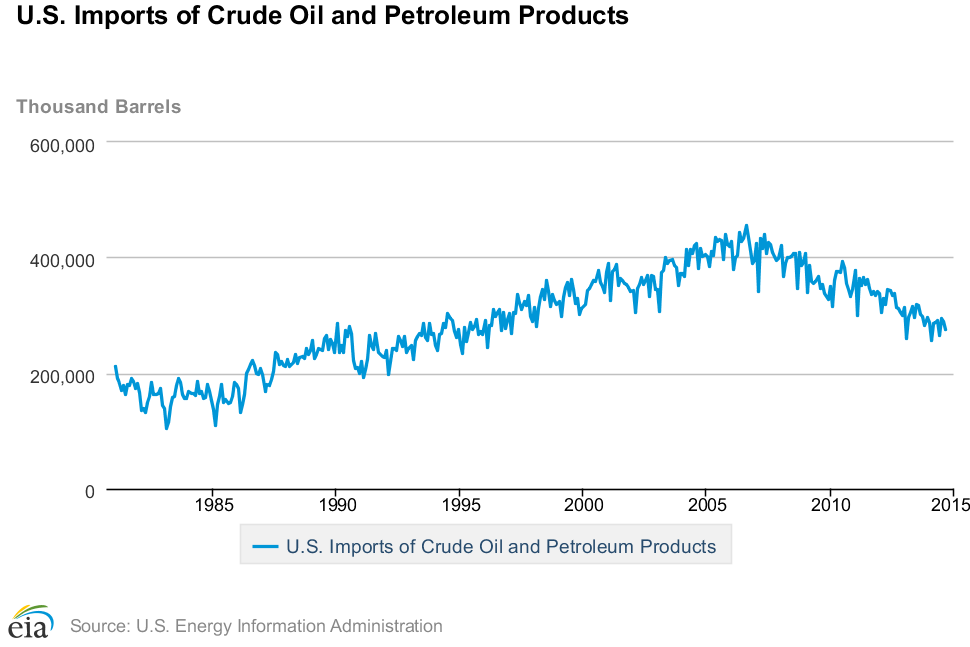 Thanks to the surge in American oil and natural gas production, the United States is producing massive quantities of refined goods, including gasoline, diesel, and other petroleum products. The global market for petroleum products remains attractive, and U.S. exports of surplus petroleum products have helped keep the trade deficit tens of billions of dollars lower than it would be otherwise.

As this chart from the EIA shows, the trade deficit – while still large – could be a heck of a lot worse.

The U.S. shale revolution has been a boon for consumers, with abundant new supplies of oil helping to drive gasoline prices to their lowest level in a half decade, according to the U.S. Energy Information Administration. According to AAA, the current average price of gas in the United States is $2.27 – a decline of more than $1 per gallon of gas from a year ago.

A December 2014 report from PricewaterhouseCoopers looked at the effect that increased shale development will have on American manufacturing. The report concluded that shale gas development is “giving U.S. manufacturing a boost through significant cost savings and jobs creation.”

Below is a chart highlighting the number of companies disclosing shale gas impacts in SEC filings from 2008 – 2013. 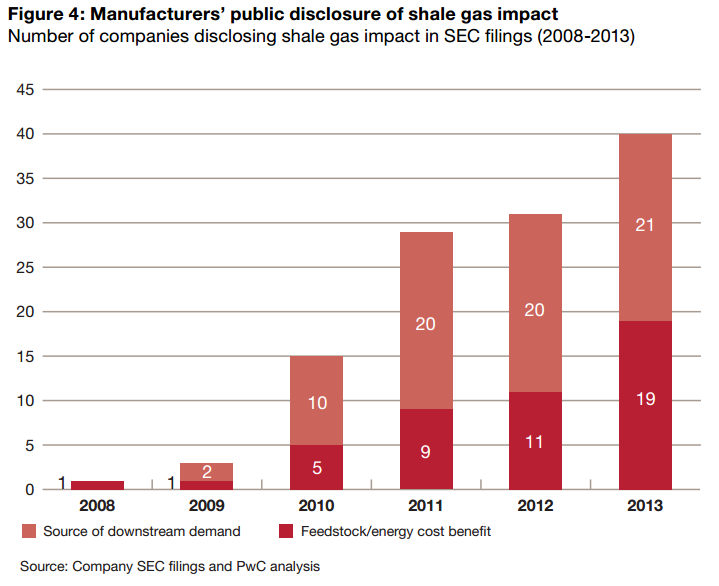 The American Chemistry Council reports that there are 197 new U.S. chemical industry projects due to shale gas, which represent more than $125 billion in new capital investment in the American economy.

Thanks to continued development, natural gas prices are at their lowest level in 14 years. This means lower heating costs for states taking advantage of their close proximity to shale resources. Here are just a few examples:

Much has been made about “methane leakage” when it comes to assessing the environmental impact of fracking. But data released this year from the U.S. EPA — for the second year in a row — showed methane emissions from natural gas systems have declined, even as natural gas production has skyrocketed over the past decade. 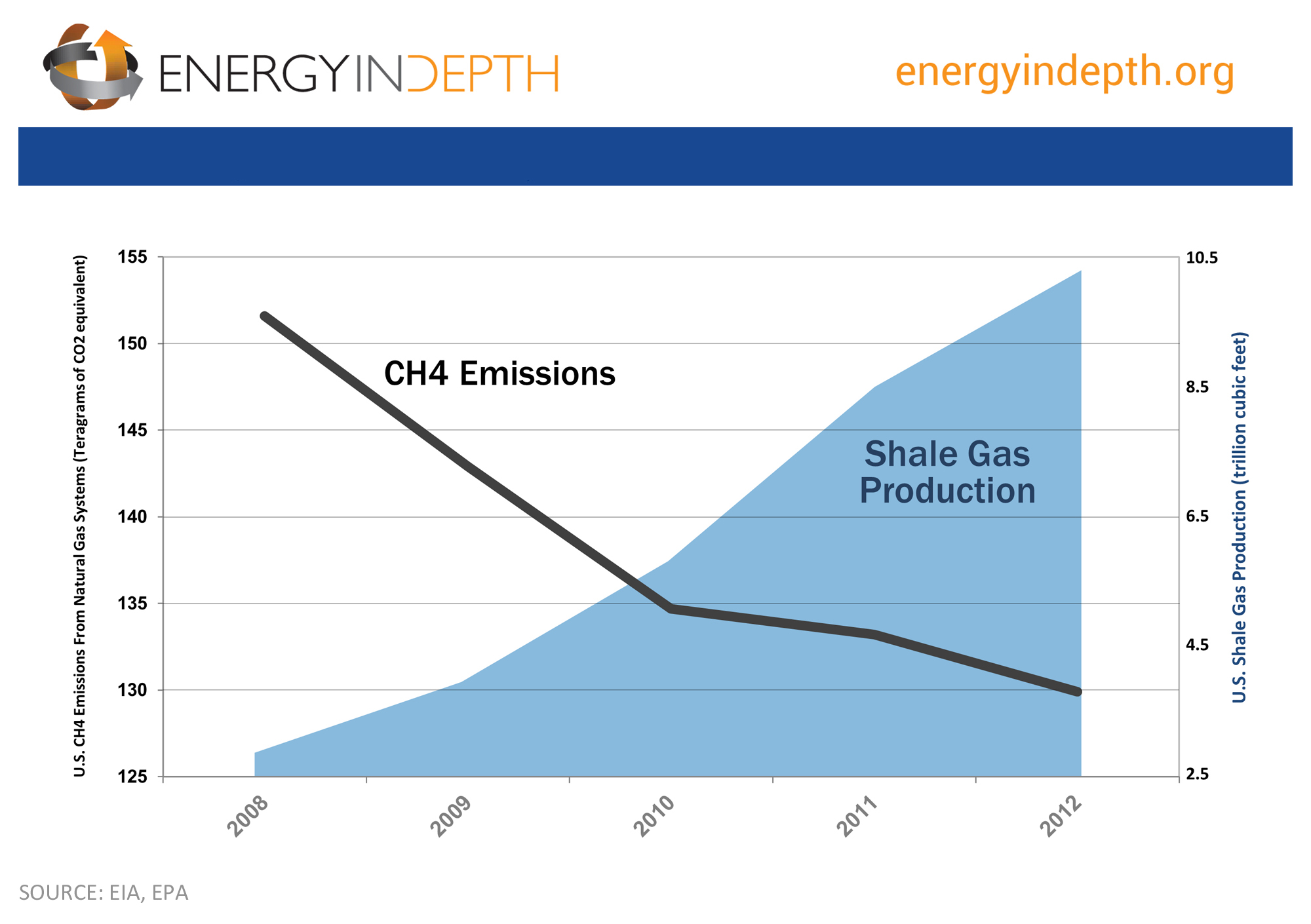 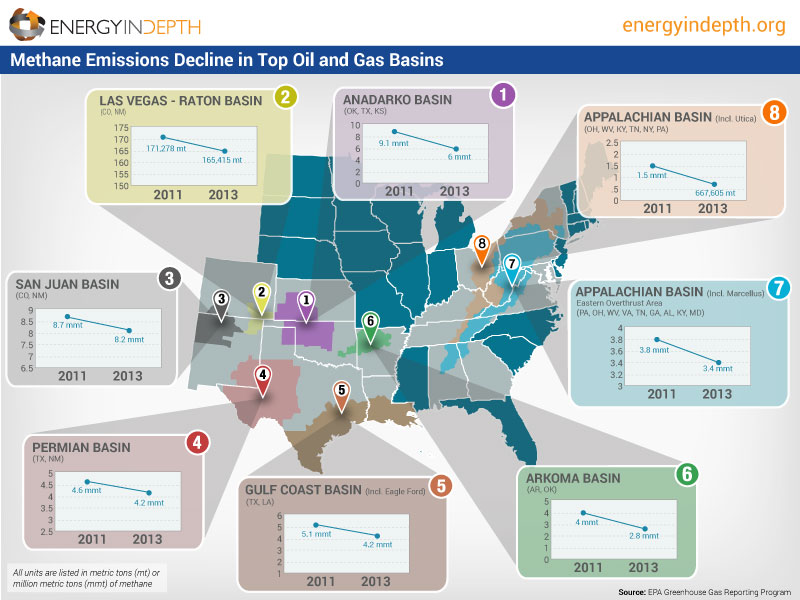 A separate report, published by researchers at the University of Texas and in coordination with the Environmental Defense Fund, found methane emissions from natural gas production activities were about 10 percent lower than the same research team had estimated last year.

The Congressional Budget Office (CBO), released a report, “The Economic and Budgetary Effects of Producing Oil and Natural Gas From Shale,” detailing the significant economic benefits of shale development.

According to the report, shale development will increase our nation’s gross domestic product (GDP) by tens of billions of dollars. Additionally, shale production will lead to increased investments by the oil and gas industry and supporting industries, increase U.S. manufacturing, lower energy prices, and more jobs and higher wages for Americans.

And for a federal government that remains mired in debt, continued shale development is another source of significant tax revenue:

How Will Shale Development Affect the Federal Budget?

The increase in GDP resulting from shale development has increased federal tax revenues, and it will continue to do so. That increase will be slightly larger than the GDP increase in percentage terms, CBO expects. Specifically, CBO estimates that federal tax revenues will be about three-quarters of 1 percent (or about $35 billion) higher in 2020 and about 1 percent higher in 2040 than they would have been without shale development.