Yesterday, Ohio played host to out of state activists who brought their anti-development rhetoric to an area that is seeing tremendous benefits from responsible shale development.  Specifically, the city of Warren got a glimpse at everyone’s favorite anti-energy guru, Bill McKibben.  The event – which was sponsored by groups like Don’t Frack Ohio (part of McKibben’s 350.org) and Washington, DC-based Food and Water Watch – showcased a colorful cast of characters at the courthouse square in otherwise beautiful downtown Warren.

The rally was also sponsored by Appalachia Resist!, an offshoot of the radical Earth First!, which recently terrorized a GreenHunter water facility in New Matamoras. The “Firsters” vandalized the place and ended up with 10 of their people being arrested.  It should be noted that seven of those 10 people arrested were from out of state. 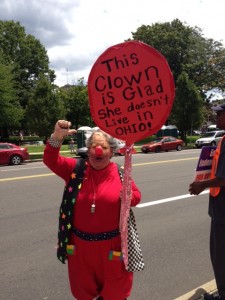 Although it looked like a parking lot at a Grateful Dead concert, the opponents’ “rally” featured acoustic music reminiscent of Yoko Ono, but by folks with perhaps less talent.  In addition to ear splitting music, the rally brought in McKibben, founder of 350.org, who spoke to the crowd on his climate change crusade.  During his speech, Mr. McKibben touted the fact that his home state of Vermont banned fracking, an action as necessary as banning surfing in Iowa. (Also of note: McKibben’s employer in Vermont, Middlebury College, supports a natural gas pipeline because it will help “reduc[e] its carbon footprint.”)

On the substance, McKibben’s ramblings about renewable energy supposedly being the only energy the United States needs demonstrated that his basis was in something other than reality.  In the real world, we know we need affordable and reliable energy, and natural gas development is making huge a difference.  In fact, as the EIA points out, electric utilities using more clean-burning natural gas is the reason the United States is leading the world in carbon dioxide reductions: U.S. CO2 emissions are at their lowest level in two decades, and other air pollution has also been slashed due to increased natural gas use.  One would assume McKibben would tout this fact, but clearly his primary interest is something other than making achievable gains in protecting the environment.

As Bill McKibben continued his verbal disdain for cleaner air, he began quoting his good friend Tony Ingraffea’s recent New York Times op-ed, for which the ink had not even dried before several actual experts had already debunked it.

Of course, Ohio wasn’t the only stop on McKibben’s cross country adventure against affordable energy, and he’s been quite busy jet-setting across North America over the past few days. As he said during the rally:

“I’ve spent the last 10 days or so out on the road with this thing we are calling summer heat.  I’ve been in, um, the Mackinaw Straits between Lake Huron and Lake Michigan where they are trying to put a tar sands pipeline underneath the great lakes.  The next night I was in Vancouver, Washington, where they want to put a huge oil portal on the Columbia river.  The next night I was in Moab, Utah, where they are fighting the first tar sands mining in that state, on to Maine where they are fighting pipelines…Washington and Massachussets where yesterday a bunch of people were arrested outside of a big coal fired power plant and Washington, DC, the day before that.” (2:00)

You would think being such a “principled” advocate that McKibben would practice what he preaches.  But clearly principles aren’t his guiding interest either: In 10 days, McKibben managed to travel more miles (and, by extension, use more oil and gas) than a normal person does in six months.

After a little research, we found he started in St. Ignace, Mich., and then traveled to Vancouver.  That trip alone is 2,432 miles.  Then it was on to Moab, Utah, which was a 1,002 mile trip.  Then Bill had to get back to Sebago Lake State Park in Naples, Maine, for another event – which meant another 2,445 mile trip.  Then he was off to Washington, DC, for yet another event: 564 miles.  After his short stint in DC, he headed back up to Massachusetts for his coal event: 436 miles.  Finally, he headed to Warren, Ohio: 601 miles.

If we tally up his 10-day travel extravaganza we find that he traveled 7,480 miles.  To put that in perspective, the average driver only drives about 15,000 miles a year.  Given Bill’s schedule, he was most assuredly flying, although we have no word yet on whether those planes ran on solar panels and windmills. We’re skeptical, to say the least.

As Mckibben left the rally, we couldn’t help but notice that he wasn’t walking or even taking an electric powered car. Instead, he was whisked away by a Chevy Captiva. 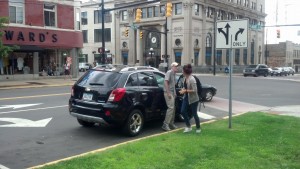 According to the EPA, a Captiva gets a combined 23 miles per a gallon at best; it chugs 19 miles per a gallon at worst, or roughly the same as a large pickup truck.  His car was most likely taking him to the airport so he could make his next stop in Richmond, Va., and then on to California.

To be clear, we love Chevrolet vehicles, and we have no problem with folks purchasing the vehicles that work best for them. But we can all agree that it’s a little strange for someone, literally minutes after he demanded we ban oil and gas development, to hop in a car with fuel economy below the national average.

Maybe that’s why McKibben wants to ban oil and natural gas for others: so folks can’t take their own cars and airplanes to his events and ask him why “energy for me but not for thee” is a justifiable operating principle.

Tomorrow, we will focus on a separate event, which occurred at the same time as McKibben’s vacation from reality and was centered on the benefits that safe and responsible oil and gas development brings to the Mahoning Valley.  Unlike the anti-fracking event, no celebrities were flown in on Hypocrisy Airlines, and there were no Irony-mobiles to shuttle folks between stops. It was just local workers and businesses benefitting from increased development.