BP: In Case There Was Any Doubt, the U.S. Shale Revolution Is Alive and Kicking

The United States shattered the previous record for the largest single-year increase in oil and natural gas production in 2018, according to BP’s annual Statistical Review of World Energy. 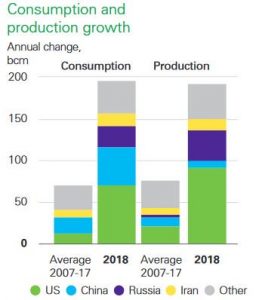 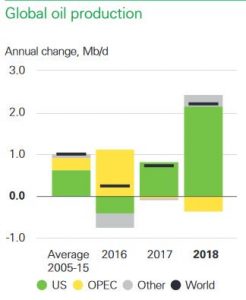 The Unites States is the leader in global oil and natural gas production.

If that weren’t impressive enough, the United States accounted for nearly all global oil production growth, increasing annual output by 2.2 million barrels per day (bpd). No country has even come close to this historic growth since 1991, when Saudi Arabia reported a production increase of 1.7 million bpd. This can be attributed to the ongoing shale revolution, which has solidified the United States as the world’s top oil and natural gas producing nation.

The BP report also highlights how the rise in U.S. oil production is transforming the structure of the U.S. economy as well as global oil market dynamics – helping America become more energy secure and less dependent on foreign energy.

Thanks to the shale revolution, global natural gas production increased by 190 billion cubic meters (bcm), or 5.2 percent. Almost half of this came from the United States (86 bcm), which had the largest annual growth in natural gas production of any country in history. The next largest contributors to growth – Russia (34 bcm), Iran (19 bcm) and Australia (17 bcm) – pale in comparison.

The majority of U.S. growth was driven by the Marcellus, Haynesville and Permian shale plays, according to the review. The Permian Basin, which has emerged as one of the most important shale plays in not only the United States, but the entire world, produced nearly 3.5 million bpd in 2018 and is expected to reach an astonishing 4.17 bpd this month.

The United States is also leading the world in emission reductions.

While BP’s statistical review warns of growing energy consumption and rising emissions, the United States continues to make major strides toward reducing our environmental footprint. Between 2007 and2017, the United States reduced C02 emissions by 1.7 percent, despite growing demand. BP attributes this accomplishment to the growing presence of natural gas in the U.S. fuel mix.

In fact, the United States leads the world in CO2 emissions, which would not have been possible without cleaner natural gas gaining a greater role in the country’s electricity generation mix. 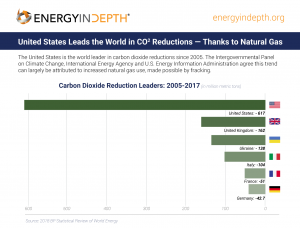 This echoes findings by an IEA report this year:

“Emissions in the United States remain around their 1990 levels, 14 percent and 800 Mt of CO2 below their peak in 2000. This is the largest absolute decline among all countries since 2000.”(emphasis added) 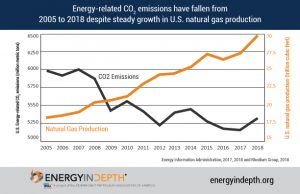 The shale revolution is also helping to provide Americans with reliable and affordable energy. Energy consumption increased across the world in 2018, due in large part to extreme weather events. The United States drove most of this growth, increasing consumption by 78 bcm. However, thanks to stronger shale production in the Appalachian and Permian Basins, the price of natural gas remained constant throughout the winter cold snaps. While some regions have been inhibited by “Keep It In the Ground” efforts to undermine pipeline construction, much of the country enjoyed an affordable, cleaner alternative to carbon intensive energy. 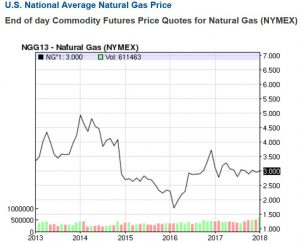 U.S. energy abundance from the shale revolution is not only bolstering the domestic economy and energy security, but has far-reaching implications for the environment and energy choice around the globe. U.S. LNG has the potential to provide Europe and other regions with a cleaner, low cost source of energy without the threat of intervention. Thanks to technological innovation by the oil and natural gas industry, the United States will continue to serve as the global energy leader and provide cheaper, cleaner energy across the globe. Spencer Dale, BP chief economist said it best:

“In case there was any doubt: the U.S. shale revolution is alive and kicking.”