BP released its latest Energy Outlook this week, reaffirming its earlier forecast that the U.S. will be energy self-sufficient by 2023 while continuing to lead the world in natural gas production. From the report:

“We project that the US becomes energy self-sufficient in 2023 and maintains its position as the world’s largest liquids and natural gas producer.”

The BP report also adds to the growing consensus that America will continue emerging as a dominant player in the global liquefied natural gas (LNG) market going forward. Of course, this is all thanks to shale resources being unlocked by hydraulic fracturing (fracking).

The Energy Information Administration’s (EIA) most recent Drilling Productivity Report projects that U.S. shale gas will reach just under 52 billion cubic feet (Bcf) per day in July, an increase of 684 million cubic feet (Mcf) per day from June. This continued growth in shale production is what led to BP’s analysists saying that by 2035 the U.S. will produce a whopping 70 percent of the world’s natural gas supply and account for 25 percent of global output. Total U.S. natural gas production will increase by 55 percent during that time period, according to BP.

In fact, the report finds that by 2020, natural gas will not only be America’s primary fuel source for power generation, but emerge as the country’s top fuel, period. BP projects that by 2023 natural gas will account for 39 percent of U.S. energy consumption, outpacing all other fuels.  This switch to natural gas is being driven not only by an abundance of the resource, but also from the environmental benefits such as lower emissions that switching entails.

For instance, the BP report found that over the last three years, carbon emissions rose at the slowest pace worldwide since the early 1980s. As the Houston Chronicle reports,

“In the United States, the world’s second-largest emitter after China, carbon emission have fallen from a recent peak of 6.13 billion metric tons of carbon dioxide in 2007 to 5.35 billion last year, amid a surge in natural gas production and a dramatic decline in coal at power plants.” 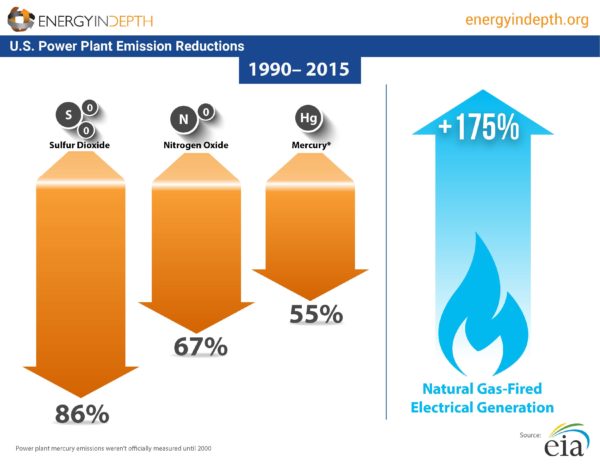 And a new study from Ceres this week finds that from 2000-2016 power plants emissions of nitrogen dioxide (NOx) decreased 76 percent, sulfur dioxide (SO2) decreased 87 percent, and carbon dioxide (CO2) dropped 19 percent, at the same time electricity generation increased by 7 percent. As the Ceres report notes,

It is for the reasons noted above that EID has highlighted the under-reported fact that increased natural gas use yields significant health benefits.

This abundance of natural gas from shale has also led to a phenomenon no one saw coming mere decades ago: the U.S. is poised to become a major player in world LNG markets, as the following EIA projections illustrate. 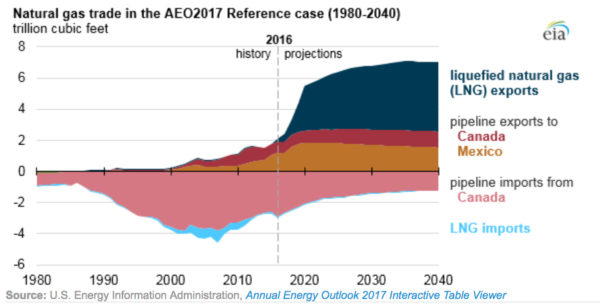 “We think natural gas will grow strongly over the next 20 years … moving to a globally integrated gas market, held together by liquefied natural gas.”

The report projects that the U.S. will lead this growth in LNG with an increase of 19 Bcf/d by 2035, meeting the increased natural gas demands from Asia and Europe. 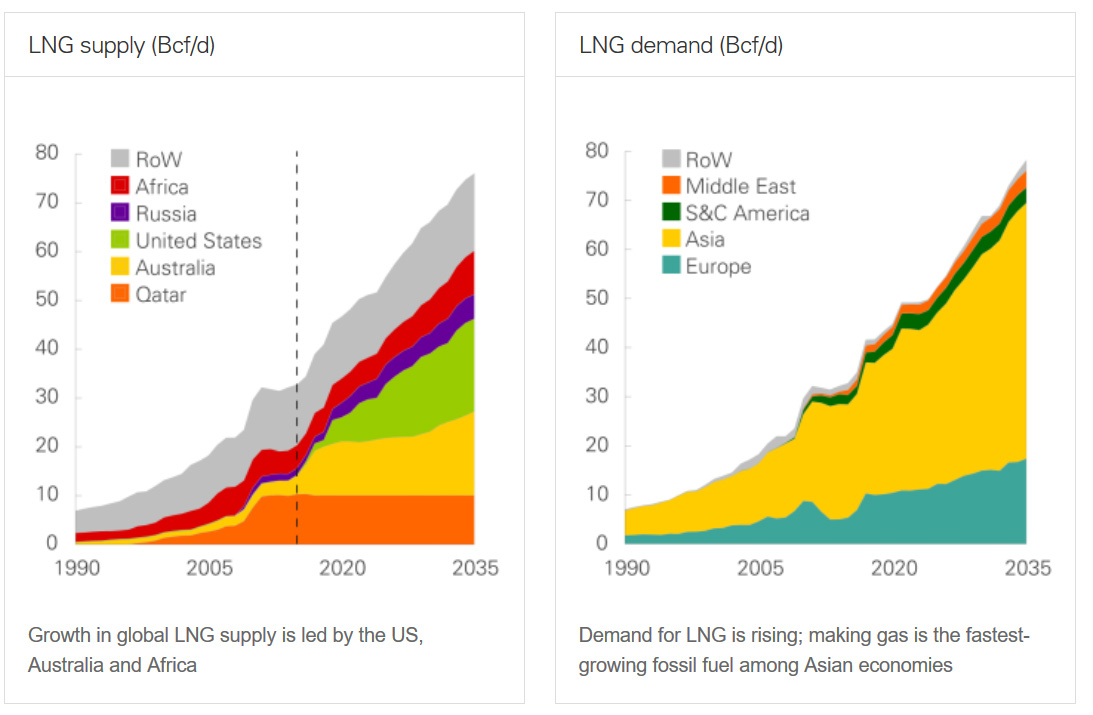 The report also explains that LNG will grow seven times faster than trade of natural gas via pipelines, due in large part to the ease with which, “LNG cargoes can be redirected to different parts of the world in response to regional fluctuations in demand and supply. As a result, gas markets are likely to become increasingly integrated across the world.”

And while Australia is most likely to dominate Asian trade because of its close proximity, the report predicts,

“US LNG exports are likely to be more diversified, providing the marginal source of gas for markets in Europe, Asia and South and Central America. As such, US gas prices are likely to play a key role in anchoring gas prices in a globally integrated market.”

This is in line with what Wall Street Journal contributor and former Obama energy advisor Jason Bordoff recently said about the U.S. LNG export phenomenon:

BP’s latest Energy Outlook shows great things on the horizon for the United States – all of which can be attributed to an abundant, affordable supply of shale natural gas.