Binghamton has had a natural gas moratorium in place since last December when a lame duck city council passed the law in their last acts as council members. The city was sued and tonight a judge upheld the position the moratorium failed to properly meet any criteria necessary for a moratorium.

The EID Marcellus team spent the last few days before Christmas last year covering events in Binghamton, including a meeting that lasted until after 11 p.m., where the City Council made its decision to enact a two year moratorium. The decision was one enacted by a lame duck council where four of the six members were not returning for another term this year and made after several business owners testified on the revenue already being generated by the natural gas industry and their fears of what this moratorium could mean for their business. Earlier this year, several of these individuals sued the city stating the moratorium was not legitimate.

Judge Lebous first determined Petitioner Nelson Holdings Ltd. had legal standing in the case as a result of real harm from the moratorium.

Here, Petitioner Nelson Holdings  Ltd. owns real property in the City of Binghamton that is zoned heavy industrial.  Given the nature of the activities that are permitted  in a heavy industrial zone, assuming DEC approval  of gas exploration and extraction, Petitioner  clearly would be eligible  to apply to the zoning board of appeals  for a special use permit to use its property for gas storage,  exploration or extraction  activities since these activities are similar to the already permitted uses under the zoning code. (See, Affidavit  of Kenneth S. Karnlet, Esq., sworn to on July 26, 2012, and Petitioners’ Opposition to Respondents’ Memorandum of Law In Support  of Motion to Dismiss, pages 13-15, which contains a chart showing  the permitted  uses that exist under the City of Binghamton’s zoning regulations which are similar to the activities prohibited  by Local Law 11-006). Petitioner Nelson  Holdings  Ltd. has stated that it had intended to pursue this activity  on its property, but due to the enactment  of Local Law 11-006,  it can no longer do so.  Thus, on the facts as presented  here, this Petitioner  is being prevented from using its property for an activity  that, in all likelihood, would have been a permitted  use by special permit prior to the enactment of Local Law 11-006. This is real harm to this landowner. Thus, the Court finds that, at the very least, Nelson Holdings Ltd. has standing  in this case.

Given that the Court has determined that Nelson Holdings  Ltd. has standing,  it is not necessary for the Court to reach the issue of whether any of the remaining Petitioners have standing (Page 8-9, emphasis added). 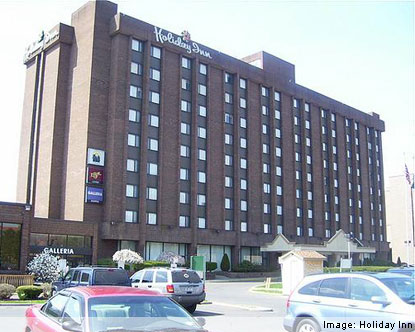 The Holiday Inn in Binghamton, NY has already seen tremendous revenue increases thanks to natural gas development across the border in Pennsylvania.

Not only did Judge Lebous find standing for at least one of the petitioners, but he also found the order does not meet the requirements of a moratorium and is an invalid law.

In this case, there is no other conclusion that the Court can reach, however, than that Local Law 11-006, fails to meet the criteria for a properly enacted moratorium.  First, there has been no showing of a dire need.  There can be no showing of dire need since the New York State Department of Environmental Conservation has not yet published the new regulations that are required before any natural gas exploration or drilling can occur in this state.  Since there are no regulations, no permits are being granted.  Second, since the DEC is not yet issuing permits,

there is also no crisis nor a crisis condition that could possibly be shown by the City at this time. Finally, the City clearly did not enact this law so that it could take steps to study or alleviate any problems that may be caused by gas drilling, exploration or storage.  Consequently, the Court is constrained to hold that Local Law 11-006 is invalid.

Now, therefore, it is hereby

ORDERED AND ADJUDGED, that Respondents’ motion to dismiss is granted  to the extent that Petitioners’ Article  78 cause of action is dismissed, and the motion is otherwise denied, and it is further

ORDERED AND ADJUDGED, that the petition and motion for summary judgment are granted  to the extent that the court declares Local Law 11-006  invalid for the reasons stated herein.

This constitutes the order and judgment of the Court (Page 14-15, emphasis added).

This is great news for the City of Binghamton–well except for Mayor Matt Ryan and Attorney David Slottje who chose this case as his one and only to represent in support of home rule because the city, .i.e. Mayor Ryan was so pleased with him–and the businesses owners who spoke out against this lame duck last minute agenda-driven decision last year. You can read the entire court order here.