Report author Howard Fleeter, an economist and “widely respected school funding scholar,” states clearly in the report that, “Fracking has dramatically raised up some poorer districts in eastern Ohio.”

Based on local and state revenue from more than 600 K-12 public schools from FY 1999 to FY 2019, the report is particularly significant coming on the heels of a 1997 Ohio Supreme Court ruling which basically said that Ohio’s formula for funding public schools relied too much on property tax revenues, disproportionately hurting lower-wealth school districts. In other words, Ohio school districts were at the mercy of their local property tax revenues each year. The Ohio Supreme Court found this method was unconstitutional and more or less told the Ohio legislature that something needed to change to bridge the gap between poor and wealthy school districts.

So for the past 20 years, Ohio lawmakers have been tasked with fixing the formula. The debate has been ongoing every year since the Ohio Supreme Court’s landmark decision and has been a capstone of virtually every Ohio gubernatorial, state senate and state representative race since. According to the OEPI, state funding to address these problems increased the first 10 years after the Ohio Supreme Court ruling, but has decreased in the second decade since the decision, while also failing to keep pace with inflation. Still, despite the shortfall distribution from the state budget over the past 10 years, many low-wealth school districts have realized hundreds of millions in new revenue. How can that be?

As Fleeter acknowledged, the change agent to “dramatically” lifting up poor schools has been fracking, not the state budget, and not taxpayer dollars. But frankly, Fleeter hasn’t seen anything yet! The real kicker is that Utica shale development and the tax revenue generated from the natural gas lifecycle have only just started to scratch the surface of the incredible revenue impact yet to come. That’s because ad valorem real estate taxes paid on production are allocated two years after a well is put into production and only after pipelines and power plants become operational.

The latter fact noted, revenues are projected to increase significantly in the near future thanks to surging Utica Shale production and related activity. A 2017 EID reported entitled “Utica Shale Local Support Series: Ohio’s Oil and Gas Industry Property Tax Payments” shows that ad valorem property taxes paid on oil and gas production poured in over $45 million from 2011 to 2015, but they are estimated to surge to $200-$250 million from 2016 to 2026, as development and production continue to increase. 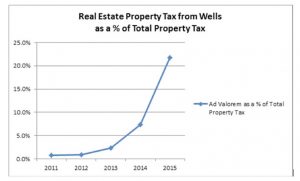 In addition to this revenue, EID has estimated that another $1.2 billion in tax revenue will be generated from pipelines, most of which are now operational, which means midstream companies are on the hook to start paying revenue into every single school district their pipelines transverse through. 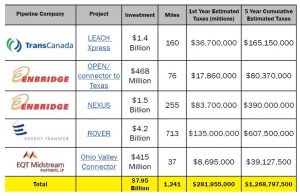 The gas flowing through the pipelines will be used to fuel new natural gas power plants sprouting up all over the state. Just one of these gas power plants will bring a single Ohio school district more than $42 million in tax revenue.

This revenue goes directly to local school districts where shale-related activities — including oil and natural gas production, pipeline transport and natural-gas powered electricity generation — are taking place. And let’s not forget the significant additional social investments made by Utica Shale operators to these schools over the past decade through scholarships , STEM workshops, teacher trainings, school uniforms, athletic programs and more – dollars that were not even included in OEPI report, yet are essentially revenue for these school districts as well. Not surprisingly, the fracking facts related to bridging the school funding gap between Ohio’s poorest and wealthiest schools has been conveniently excluded from almost all media reporting on this new report, despite the author’s own admission of the facts that shale has indeed been a “dramatic” influence.

While politicians may continue to debate the formula to address the revenue gap between wealthy and poor Ohio school districts, the data is clear — shale development has and will continue to quietly address these extremely important funding issues (and without any pomp and circumstance), which is why Ohioans continue to overwhelming support oil and natural gas development.