Bureau of Land Management To Lease Another 1,186 Acres in Ohio

The Bureau of Land Management (BLM) announced late last week it will lease another 1,186 acres in Ohio’s Wayne National Forest (WNF) in an upcoming auction set for March 23. In doing so, the BLM has increased the acreage up for sale by 65 percent over the last offering.

All of the acres for lease are in Monroe County, which is home to the most prolific dry natural gas in the state. As EID recently reported, this news is very important, as it allows more mineral development in Monroe County. This is the second lease sale of federal minerals in the forest, as the last sale included 719 acres, generating approximately $1.7 million in revenue off the lease sale for taxpayers. This new sale could yield an additional $2 million or more in revenue, and more importantly, the local government will see a portion of this sale, as well as a portion of the royalty payments, which is good news for the people who live and work in Monroe County.

Looking close at the auction sale announcement, you’ll notice that not all acres include 100 percent of federal mineral ownership, and in almost every case the acreage includes stipulations for its use. Some of the acres for sale only include “50%” ownership. For example, take a look at one area up for lease sale in the excerpt below. As you can clearly see, the United States government owns only a fraction of the mineral interest associated with this acreage; the section of land is also subject to various stipulations as well. 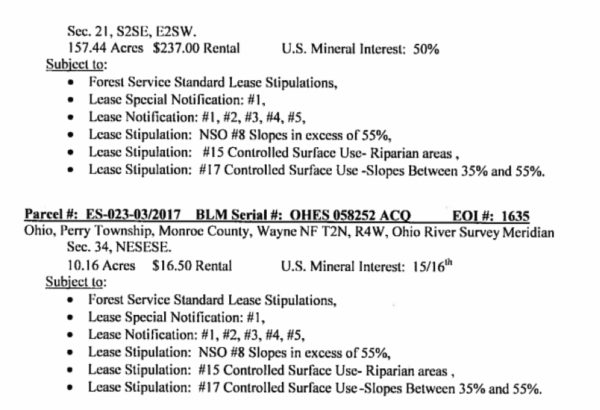 This excerpt from the upcoming lease sale notification highlights two key points. First, the debate over leasing in the Wayne National Forest is unique, as the federal government only holds mineral interest of a fraction of the minerals under the surface. Therefore, leasing is vital for private royalty owners to have their minerals developed. Second, the debate over leasing in the Wayne includes significant environmental considerations, including but not limited to stipulations for each tract, as you can clearly see above. In addition, an operator must apply for an application to drill should the operator intend to develop the surface of the forest. The application to drill includes additional environmental provisions, as well as another opportunity for public comment. Moreover, the BLM has found time and time again that leasing will have “no significant” environmental impact to the forest. Specifically, BLM District Manager Dean Gettinger has said,

“Based upon a review of the EA (Environmental Assessment) and supporting documents, I have determined that the Proposed Action is not a major Federal action, and will not significantly affect the quality of the human environment, individually or cumulatively, with other actions in the general area.”

Still seething after their “Don’t Frack the Wayne” misinformation campaign was defeated last year, anti-fracking activists continue to vow to fight against leasing. As their efforts have completely failed, they have turned to theatrics and piggybacking off the Dakota Access Pipeline efforts in a weak attempt to revive their failed efforts and raise money to keep on. They have even turned to selling beer to help their efforts, hosting a fundraising with a local brewery called “No Frackin’ Wayne” where they encouraged boozy Ohio University students to buy a pint, withv a dollar of each sale going to fight fracking in the Wayne. 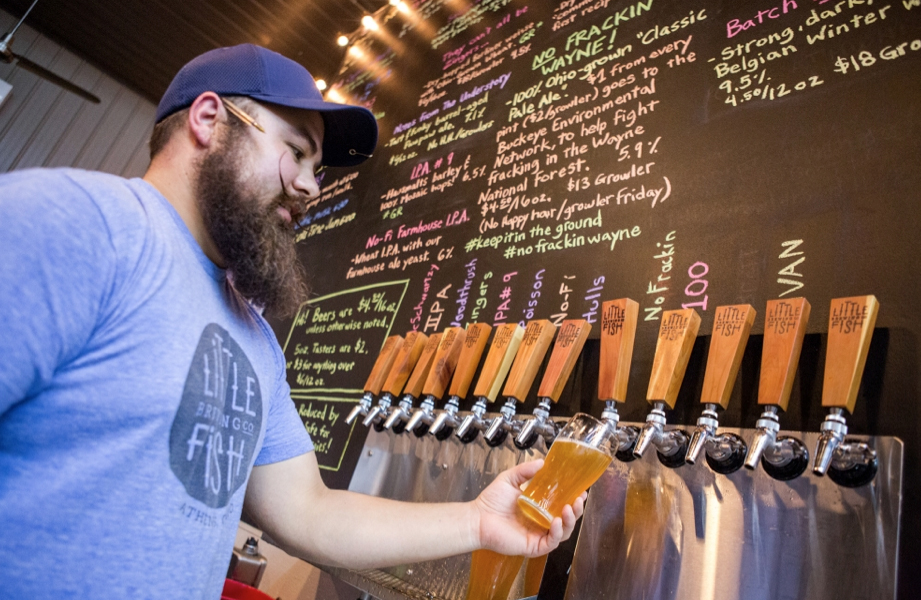 Beau Nishimura, taproom manager at Little Fish Brewery, pours the brewery’s latest beer, “No Frackin,” for a customer during a recent anti-fracking fundraiser. The money raised was for the Buckeye Environmental Network in their fight against fracking in the Wayne National Forest. (The Athens Post)

While the fringe environmental extremists try to capitalize on a group of 10 students at Ohio University, we can assure you that the students, teachers and administration at Switzerland School in Monroe County feel differently about leasing minerals in the Wayne National Forest. Thanks to these sales, the students of the local school district in Monroe County will finally see some financial support. This most recent example (above) underscores how deeply out of touch fringe activist really are as compared to the 84 percent of Buckeye State residents — a mix of Democrats and Republicans — who said in a recent poll that they would like to see U.S. energy development increase. Thanks to this upcoming lease sale, energy development in Ohio will increase.