Cabot Oil & Gas is at it again.  They have not only invested $2.5 million in the community and helped to build a new hospital, but they are also building a sustainable model for long-term development in the region.  The next big step is helping the broader community to use and directly benefit from the gas they are producing every day.  In that vein, Cabot has built a compressed natural gas (CNG) fueling station in Springville.

Currently, the CNG fueling station is being used for the Cabot fleet of vehicles and to power equipment on their own development sites.

Cabot also hosted an exciting event last week celebrating their CNG station, and a variety of vendors – from colleges to pipeline companies – were in attendance.

The first person we came across was Bill Kelly, the co-owner (along with his son) of Taylor Rental.  He told us how the natural gas industry has boosted his business tremendously, and he is looking forward to seeing more natural gas fueling stations popping up in the area.

Next, we spoke with John Augustine from The Marcellus Shale Coalition.  He expressed his support for Cabot and discussed the logical progression of developing the resource successfully. Augustine also talked about how lucky the companies are to be able to use a natural gas-powered unit in the production of natural gas (we’ll add that it’s also incredibly efficient).

Locally, Lackawanna College is helping to develop the workforce for the natural gas industry.  We spoke with Rick Marquardt, a representative of the college, who discussed in detail the specific program the school created.

Many other people spoke to the audience, including elected leaders from the Pennsylvania Legislature.  Rep. Tina Pickett, in the video below, discusses the large steps Cabot has taken to further the use of more natural gas locally.

Cabot’s director of operations spoke briefly, explaining the vast amount of natural gas we have available in the Marcellus Shale. Cabot’s production rate is now up to an incredible 1.2 billion cubic feet of natural gas per day, and the company is still building.

Scott Staruch from ANGA talked about how Northeast Pennsylvania has been at the forefront of the natural gas revolution.  He discussed the supply and use of natural gas, noting the latest supply estimates (reserves and technically recoverable natural gas) total two quadrillion (2,000 trillion) cubic feet.  This means we will see jobs and boosted economies from natural gas for decades.

Mark Volk, President of Lackawanna College spoke to the audience next.  The goal of the program was to create a specialized program where students could attend the school for two years and be totally prepared to join the natural gas workforce.

Cabot also just put out a news release noting the significance of this program, especially in light of President Obama coming to the region on Friday.  It’s worth quoting from:

President Obama himself recognizes the significance of this breakthrough, which is why he’s visiting our region on Friday – including a stop at Lackawanna College in Scranton, an institution offering natural gas education in northeastern Pennsylvania.

Since 2009, Lackawanna has offered a curriculum in the study of petroleum & natural gas with an associate degree in Natural Gas Technology. The program has been developed in cooperation with the natural gas industry to prepare students for a career in the operations segment of the natural gas industry – a welcome new source of regional job growth.  In fact, the college made a significant financial commitment to the oil and gas industry by investing over $750,000 to build a new dedicated regional center at New Milford in Susquehanna County.

The president of Lackawanna College, Mark Volk, had this to say about the school’s program: “Our school recognizes the nearly limitless growth potential the natural gas industry offers students. Our goal at Lackawanna College is to educate the next generation of leaders in an industry that offers great promise for our region, our state and indeed our nation. Lackawanna College is committed to working in strong partnership with Cabot Oil & Gas to ensure that this promise is realized in all our students.”

In just over three years, over 75% of the program’s graduates have been hired by major E&P, midstream and pipeline companies who return year after year to interview and hire our students.   Another large chunk of graduates have continued their petroleum engineering degree at other colleges or found jobs in another portion of the industry, such as land operations – bringing the total percentage of students finding jobs after the program up to the high nineties.

The number of students enrolling in the oil and gas program at Lackawanna has grow steadily over the last few years and given its current level of success the total class size is expected to double in the next few.

Tuition revenue growth from an expanding student base, coupled with financial and knowledge contributions from the natural gas industry, have made Lackawanna a model for the President to highlight.

Cabot is a major part of the transition to energy security in the region, with an average daily production of 1.2 billion cubic feet (Bcf).  Government data shows that Cabot had 15 of the top 20 producing wells in Pennsylvania in 2012 and, since 2008, total cumulative production of 488 Bcf from just 225 producing wells.

Cabot contributed to the program with corporate donations, industry know-how and leadership needed to help the program establish its expertise.  We’ve been grateful for the opportunity to donate things like equipment, expert lecturing, mentoring, and more – as well as giving students plenty of access to drilling sites, producing well sites, compression facilities, etc. during their course of study in Susquehanna County.   In short, the type of things that helps make an education come alive.

In addition, Cabot is committed to supporting the Lackawanna College program by hiring graduates when needed, as well as placing students in internships during their work study.

It’s hard to imagine a more appropriate model of economic sustainability, which was the theme of the entire CNG celebration. 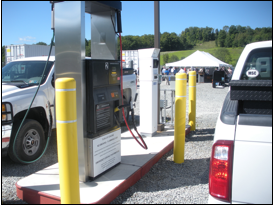 Volks’s remarks were completed by those of another manager from one of Cabot’s affiliates, who discussed his own story and how he initially couldn’t move back into the area after completing his degree due to a lack of jobs.  He eventually applied to Cabot, however, and was hired.  He is now the president of Gassearch Drilling Services (GDS), which is a sister company to Cabot Oil and Gas.

The last representative to speak was State Representative Sandra Major.  She expressed her support for the natural gas industry and the steps they are taking to build a future for their community.  She also supports holding events to educate the business owners and show them the clean, efficient, reliable, home-grown resource.

Finally, the moment we all were waiting for, we got to see how the natural gas pump works.  Watch the video below to see and hear the process.

The overall message of the beautiful day was natural gas is here to stay.  The companies and businesses utilizing natural gas see this as a generational resource that can support several economies for years to come.  Natural gas is now helping the local businesses who help produce it, and saving money for everyone along the way.