It’s come to this: the strategy of California’s “ban fracking” activists — having had their anti-scientific ideology clearly rejected — has been reduced to standing on street corners waving signs and chanting slogans with a few dozen of their activist friends. Not to be outdone, some local entertainers also embarrassed themselves by jumping on the bandwagon.

After months of intense debate, extensive reviews of the scientific literature and input from citizens, industry, responsible environmentalists and academics, California’s legislature passed the most far-reaching hydraulic fracturing law in the nation. The state’s Division of Oil, Gas and Geothermal Resources (DOGGR) then followed-up by releasing draft rules to implement the law, which will further strengthen California’s regulation of “fracking.’

Now that we have incredibly strict news laws and regulations, how do the radical environmentalists react?

With gratitude, given their allegations that fracking was unregulated in California? Nope.

By drawing our attention to sound science contradicting the consensus view that hydraulic fracturing is a fundamentally safe process with manageable risks? Nope.

By pointing out weaknesses in DOGGR’s regulations and constructively working with regulators to make them stronger? You would think so, but…nope.

Instead, the activists’ big strategy is to follow Gov. Jerry Brown around the state and wave signs telling him “climate leaders don’t frack.” 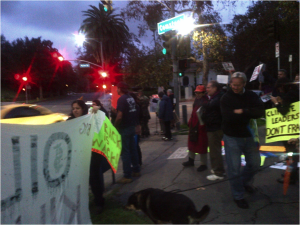 This photo was taken last Thursday night on Beverly Glen in the Westwood neighborhood of Los Angeles. The activists were hoping that the Governor’s car would pass them as he made his way to a nearby event. About 25 people showed up to wave signs (paint comes from petrochemicals, by the way) and attempt to start chants that never quite got off the ground.

A few irony-impaired Angelenos, no doubt considering themselves good environmentalists, honked in support of the protestors while driving by in their SUVs. One Rolls Royce Phantom (EPA estimated gas mileage: 11 MPG) even gave a honk.

The “Climate leaders don’t frack” narrative is, of course, not an argument — and it is a demonstrably false assertion. It is the increased production of natural gas – which has been been the result of safe and prudent fracking – that has brought our CO2 emissions to their lowest levels in 20 years, allowing the U.S. to lead the world in emission reductions. Now that is climate leadership. Here in California, where we have the most progressive environmental protections in the country, we mostly produce oil, and the increased use of hydraulic fracturing will lead to more home-grown energy, meaning that we will not need to ship oil in to our state, on tankers and by rail, from places hostile to the United States with much less strict environmental protections. This is an inconvenient truth that activists consistently ignore.

Back to the rally, though: two dozen activists is a small (if not embarrassing) turnout in a city with a metro-area population of 18 million. Indeed, this is about the size of the average line at Pink’s Hot Dogs on La Brea – on a slow day. To the protestors’ credit, 25 people is one more person than voted to put a moratorium on hydraulic fracturing in the 80-member, Democratic-controlled State Assembly earlier this year.

No doubt Jerry Brown, one of the most high-profile environmentalists of the last 40 years, would be amused — both at the suggestion that his commitment to the environment is anything less than rock-solid and that a few professional activists waving a sign on Sunset Boulevard could force him to disregard science and regulatory judgment. After all, hydraulic fracturing has happened more than 1.2 million times during the past six decades, and it has occurred without the adverse environmental impacts claimed by the activists.

There was another protest in the L.A. area on Thursday, this one in front of the Milken Institute in Santa Monica. Photos of the event suggest that another small, but ideologically committed, band gathered there as well. The discourse was as deep and well-informed as it was at the Westwood sign-waving party: 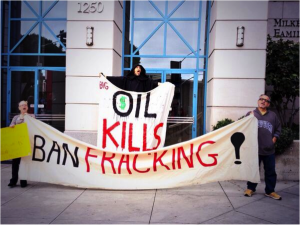 If the Governor were to substitute his judgment and 65 years worth of science with the judgment of these three and their ideological cohort, we’d have much bigger problems in California than crafting a balanced energy policy. That probably didn’t occur to the activists as they drove home in their cars, which as of this writing were not fueled by pipe dreams or wishful thinking.