Over the weekend, anti-fracking activists burned a heck of a lot of fossil fuels as they boarded buses, planes and cars to get to Oakland for what they claimed would be the “largest anti-fracking rally in history.” While the organizers promised 10,000 participants, it soon became clear that wasn’t going to happen so 350.org later brought its count down to 8,000 participants. In reality, the Oakland Police Department estimated the crowd to be about 2,000 people, only 20 percent of what the organizers originally promised.

Of course, this kind of a turnout is in keeping with the paltry attendance at events like the “Global Frackdown” rallies, or the recent anti-fracking demonstrations in Washington, DC, Marion, IL and Columbus, OH.  A recent event in Denver, CO had to be canceled when only one person – the group’s organizer – RSVP’d for the event.  Far from being the “largest anti-fracking rally in history” it looks as if Saturday’s stunt may have had even fewer participants than a similar gathering in Sacramento last March.

Ahead of the rally, EID released its top ten most ridiculous stunts pulled by ban fracking activists.  Of course, with this latest demonstration, we’ve got a lot more to add to that list: 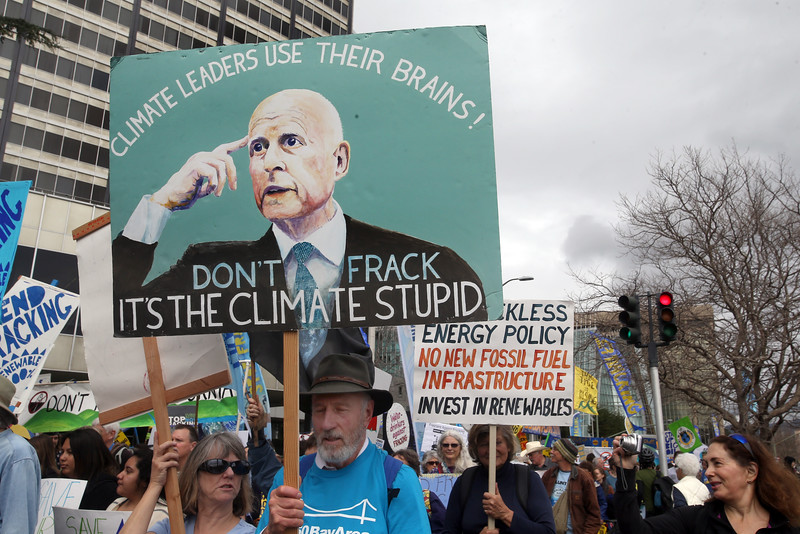 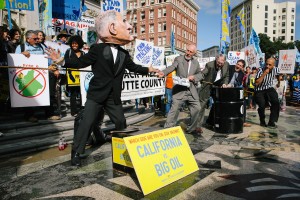 Governor Brown puppets?  And these are the folks who say they have the science on their side! 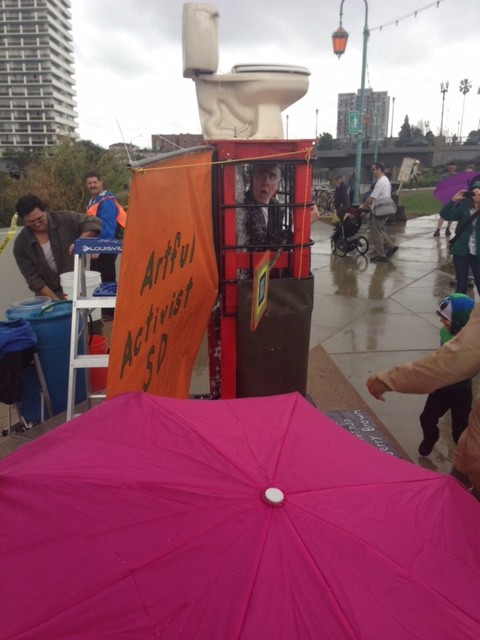 Activists have often claimed that fracking should be banned because of the amount of water the process uses – even though all the hydraulic fracturing in California in 2013 used the same amount of water needed to keep just one golf course green for a year.   But that didn’t stop them from wasting loads of water on a dunk tank – with a toilet on top – to mock the Governor. No sober discussions here about the fact that water is a by-product of oil production and the produced water is cleaned and recycled for water re-injection, enhanced oil operations and agriculture.

And here we have: a barrel of oil from hell, apparently.  According to a participant writing in the Daily Kos, this photo is emblematic that,

This kind of extreme rhetoric — literally demonizing the product that allowed the activists to get to the march in the first place – was widespread. 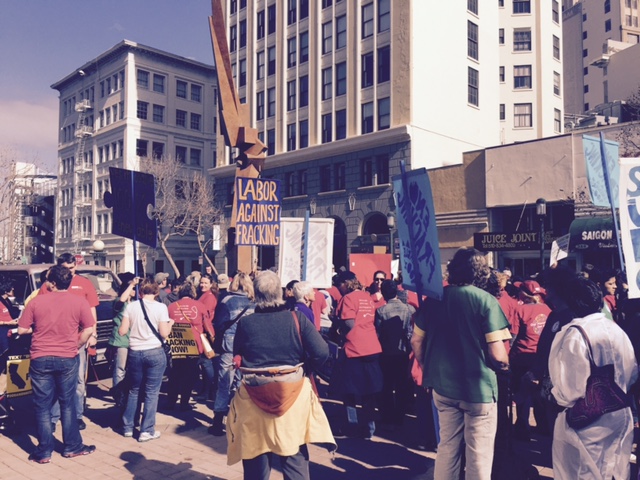 Activists managed to get a small labor contingent involved, which must be a great comfort to the 500,000 Californians whose jobs exist as a result of the oil and gas industry.  Nevermind the fact that the top labor groups in the country have consistently supported shale development.  As Dennis Martire, the mid-Atlantic regional manager for the Laborers’ International Union of North America (LIUNA), said “The shale became a lifesaver and a lifeline for a lot of working families.” 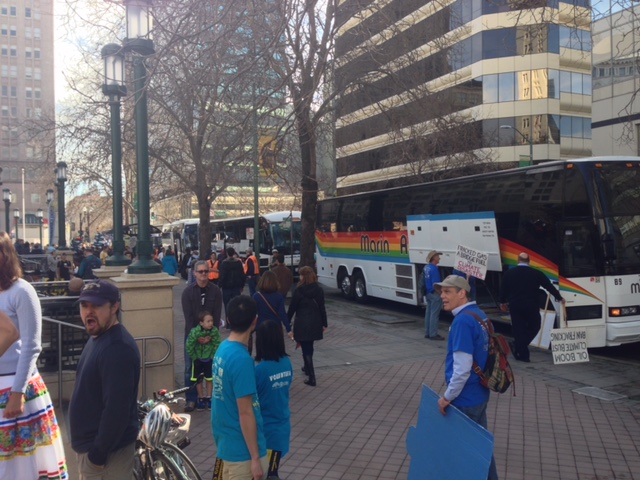 Here we have anti-fracking activists loading out of buses parked all the way down the street – powered, of course, by diesel.

But the show stopper?  A flash mob of people dressed as bugs dancing to Britney Spears. Who knows what it means, but when you don’t have science and facts on your side, the show must go on!

Climate change is certainly a pressing issue – but this rally was just a lot of sound and fury, and plenty of ridiculous stunts. What was missing was an acknowledgment that developing energy in California, under strict environmental regulations, is better for global carbon emissions than importing more than half of our oil by tanker and rail from countries with more lax regulations. Lost too was an acknowledgment that, thanks to fracking and the shale revolution, the U.S. leads the world in carbon emission reductions.

It is unfortunate, then, that many California activists, who claim climate change is their top public policy priority hold rallies and agitate for a policy – a ban on hydraulic fracturing, or fracking — that would exacerbate, rather than mitigate, climate change. Fortunately, Governor Brown, whom activists seek to influence by calling him “stupid,” has shown that he understands the overwhelming scientific consensus that fracking technology is fundamentally safe and that it is far better for the climate to develop our own resources rather than importing them from abroad.  As he put it,

“As long as Californians are going to drive 332 billion miles a year and consume 14 billion gallons of gasoline and 4 billion gallons of diesel, we’re going to have to have a plan that’s comprehensive, that is stuck to and implemented consistently over time and that deals with all the issues, not just a subset,” Brown said. “As we speak, protesters and nonprotesters are burning up gasoline that is being shipped from Iraq.”

So, activists like Tia Lebherz of Food and Water Watch are objectively wrong when they repeat things like:

“[C]limate leaders don’t frack, and until Governor Brown stands up to Big Oil and bans fracking in California, he remains a climate change enabler.”

Protest marches have a storied history in the United States. They have drawn attention to pressing issues and they have been catalysts for change. Climate change is an issue that demands solutions. But dunk tanks, slogans and impossible demands (several signs read “100% renewables” in a state with 38 million people and roughly the same number of automobiles) will not provide these solutions. The discussion about our energy future is too important to be in the hands of those for whom stunts and gimmicks are a substitute for science and innovation.