Last weekend, in what was dubbed the largest anti-hydraulic fracturing rally in California’s history, about two thousand environmental activists descended upon the California State Capitol in Sacramento.

While it wasn’t the turnout that organizers boasted it would be, it was nevertheless a far cry from recent “rallies” like this pitiful one last week in Long Beach. 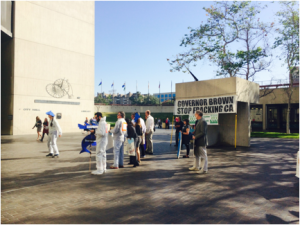 According to the organizers of the Sacramento event – including the deep-pocketed and extreme anti-industry groups Food and Water Watch (FWW) and the Center for Biological Diversity (CBD) – the stated purpose of the rally was to encourage Governor Jerry Brown to use the powers of his office to stop hydraulic fracturing in California.

But for the radical activists – the professionals who have used their resources to scare, mislead and confuse their supporters into donating money and time to the anti-fracking cause — the rally was about a great deal more.

First, though, the logistics of the event were impressive – including the use of many buses to try to cut down on the event’s inevitably large carbon footprint. It’s also worth noting that, one-on-one, many of the attendees were among the nicest people you’d want to meet.

Here are a bunch of enthusiastic seniors making their way to Sacramento from San Diego, unaware that they’ve been sold a bill of goods by FWW. 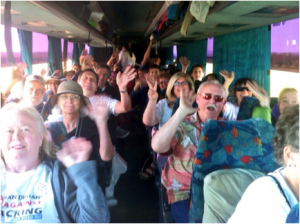 Most of these and other activists – who don’t draw their salaries from the multimillion dollar trusts that fund the radical environmental movement – simply want to ensure that they live in a state with clean air and clean water. They also entertain a noble but perhaps naive belief that renewables can replace all fossil fuels tomorrow. Some also believe that cleaner burning fuels like natural gas have no role to play in expanding the reach of renewable technologies.

But it is when the chants began that group-think took over. There was also, sadly, the strategic use of children, which seems to be a staple of environmental demonstrations these days, as if we don’t all want our children to enjoy a better future. 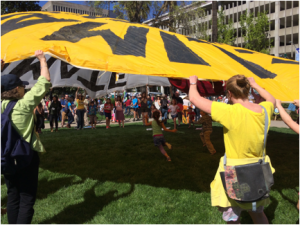 It certainly wasn’t a dull bunch, either. Prominent among the seeming minority of serious attendees were the full gamut of colorful groups that usually attach themselves to left-of-center rallies: Socialist workers? Check. Cindy Sheehan for Governor? You bet. Citizens for a Safe Community, 350.org, various Democratic Party factions? Fully accounted for. And, of course, FWW and CBD and their ilk made sure their presences were known.

It was clear that the majority of those in attendance who weren’t professionals were overwhelmingly either rather young (student-aged) or retired. (The committed ideologues of the West Los Angeles fractivist community seemed to be the exception that proved the rule.) The professionals were the attendees in their late 20-early 40s; prime scare-mongering years, it seems. 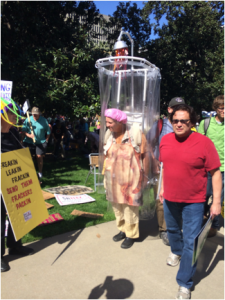 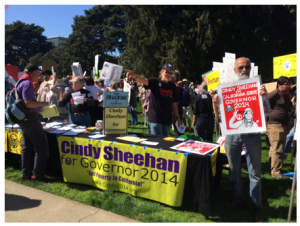 The event sometimes felt more like a celebration, aided in certain areas (based on olfactory observation) by a substance recently made legal in the states of Colorado and Washington: 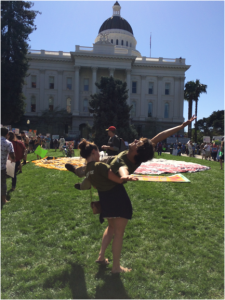 In any case, the people missing from the ideological spectrum were those representing the mainstream of the Democratic Party, and any Independents or Republicans. In other words, it’s easy to see that the activists, although loud, were not speaking for the majority of Californians.

So the activists succeeded in generating some sound and fury – but to what end?

A casual observer wouldn’t recognize that this was a gathering of people who have lost the argument. In fact, they have lost repeatedly and decisively — in the scientific literature, at the ballot box, and in the court of public opinion.

The Governor, the person they ostensibly gathered to “persuade,” has heard it many, many times before. There are constant rallies, like the Long Beach one last week. Indeed, at the recent California Democratic Convention, anti-fracking activists shouted the governor down, making it difficult to continue. Exasperated, he explained to them, “I get it.”

Persuasion isn’t accomplished by dressing up in funny clothes and chanting slogans (though, in keeping with the theme of conservation, most of the slogans were recycled from the 1960s). Nor is it accomplished by encircling the Capitol building to give it a “hug.” (Yes, this happened.) And it certainly isn’t achieved by enlisting college freshmen, poets and legislative aides to pretend that they know more than climate scientists and geologists.

Yet the activists seem to think that if the hold just one more rally or yell a little louder, that somehow the facts will change and the governor will be persuaded. They are making a leap of faith that hydraulic fracturing – a proven, safe, and routine part of oil and gas development and has been for many decades – will suddenly be regarded as something it is not.

Truth, however, is not a numbers game. The scientific verdict is clear. The overwhelming consensus of scientists, and the consensus of Obama administration regulators and state regulators from all over the United States – including the scientists at California’s Department of Conservation – is that fracking is safe and has manageable risks. No amount of yelling or symbolic Capitol hugging will change this.

But the goal of the professional activists, they admit, is to use “fracking” – including the clever pun possibilities – as a catch-all term to describe all oil and natural gas development. I doubt many of the happy seniors on the bus from San Diego realized this.

By all means, let’s keep learning more. Let’s keep discussing how to make oil and natural gas development even safer, cleaner, and more economically advantageous for our state and our communities.

But the way to do this is for serious people, even those with different points of view, to have adult conversations. This is what happened recently, when a dozen measures targeting hydraulic fracturing were debated during the last legislative session. During that sober debate, all but one of those measures went down to defeat: SB4, the bill that imposed a regulatory regime instead of a senseless ban or moratorium.

Responsible economic development coupled with environmental protection is how we do things in California, and last Saturday’s histrionics won’t change that. The sound and fury in Sacramento, to paraphrase Macbeth, ultimately signified nothing.