A new report from the Stockholm Environment Institute is receiving criticism for inflating risks associated with new oil and natural gas development projects in Canada. A new blog from the Canadian Energy Network states that the report intends to sow doubt for Canadian policy makers—making any federal relief package that much less desirable.

Despite its shortcomings, the report, which is intended to inform economists and policy makers, still finds that a majority of Canada’s existing oil and natural gas projects will be profitable beyond 2030:

“Looking at the chart below, producers left of 105 million barrels of oil per day will remain competitive in the market, based on their cost of production being lower than $85 per barrel. As you can see, most of the anticipated and existing development in Canada (shown in blue) fall under this category.” 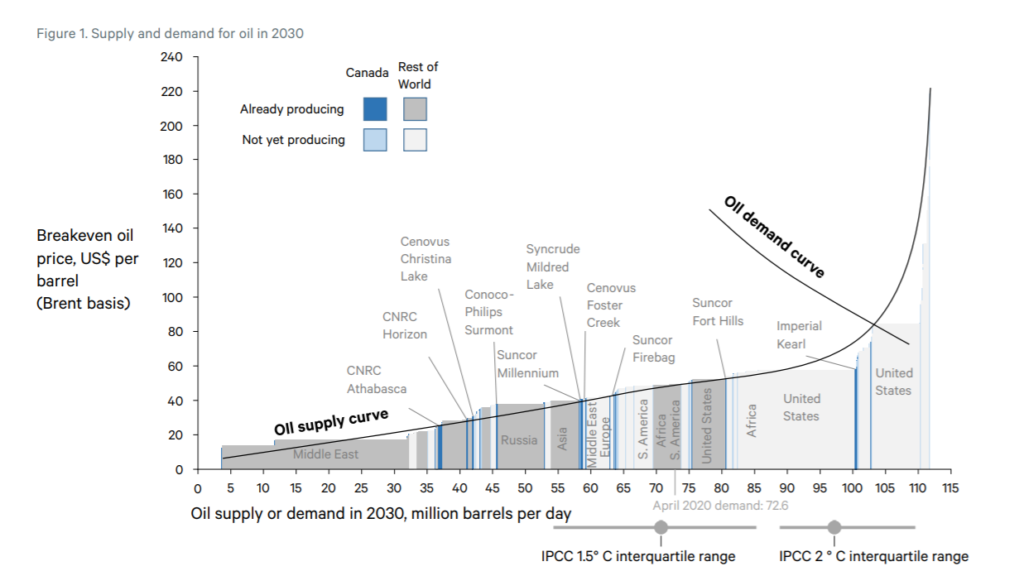 The report was also criticized for being out-of-touch with recent statements from leaders in the oil and natural gas industry. The SEI report states a break-even price of $80 per barrel is necessary for not-yet producing developments to become profitable, however, Canadian energy executives are stating barrel prices could reach up to that break-even point within the next couple of months.

Overall, the growing demand for energy worldwide underscores the importance of continuing to develop Canadian resources to protect national interests all while becoming global leaders in greenhouse gas emissions reductions.

Small businesses seem to be getting the biggest boost from a $1.7 billion federal aid package to clean up inactive oil and natural gas wells.

A study conducted by AltaCorp Capital looking at programs administered in Alberta, British Columbia and Saskatchewan suggests that the market for well abandonment and reclamation work could double within three years. The new funding will create jobs for a range of activities within the energy industry such as rig operations, engineers and consultants and trucking.

Tim Monachello, an analyst with AltaCorp, spoke with the Calgary Herald on how small business will be the biggest beneficiary of the funding:

“One of the main take-aways is that it’s really going to benefit smaller (service) companies the most, in terms of exposure. It probably does achieve what the government is looking for. It will put people back to work. But it will be more impactful for smaller and private companies.”

The Calgary Herald notes that approximately 15,000 to 21,000 people will be employed by the well abandonment and reclamation efforts. This employment number includes spending by both industry and the federal government. An estimated 7,600 to 12,000 positions will come just from the federal stimulus.