Under the executive order signed by President Joe Biden in January, a planned lease sale of approximately 78.2 million acres in the Gulf of Mexico has been postponed  – a move that will have significant negative impacts on the economies and employment of states in the Gulf Coast region and puts environmental efforts across the country in jeopardy.

There has been bipartisan criticism of the executive order, with lawmakers from both sides of the aisle urging Biden to reconsider a leasing ban because of the negative impacts it would have.

This level of production supports more than 345,000 jobs and, not surprisingly, the high production coming out of the GOM nets substantial revenues for the federal government and states along the Gulf Coast: GOM production generated $5.6 billion for the U.S. Treasury in FY2019 and had a $28.6 billion impact on the U.S. GDP.

Not only that, offshore production funds conservation programs in every county in the United States, including in U.S. territories. 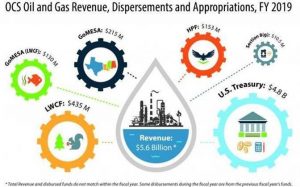 “The continued leasing and development of oil and natural gas in the Gulf of Mexico is critical not only to the coastal Gulf states that host the infrastructure and support industries for Gulf OCS exploration, but to the economy and energy security of the nation as a whole.”

Democratic Reps. Vincente Gonzales, Henry Cuellar, Lizzie Fletcher, and Marc Veasey of Texas expressed similar concerns in a letter they wrote to the president in January:

“A federal ban for any period of time will certainly imperil hundreds of thousands of jobs, entire communities, and billions of dollars in royalty revenues to the Federal Treasury and eliminate funding for important conservation programs such as the Land and Water Conservation Fund (LWCF)… We urge you to rescind this order and to reject policies that would ban responsible oil and gas leasing on federal lands and federal waters.”

“When Washington radicals ban drilling on federal lands, Americans lose their jobs, investment flows overseas, and communities across America lose a primary source of revenue for schools, health care, and conservation efforts…Biden’s plan is projected to destroy 48,000 Louisiana jobs by 2022 and will permanently gut this important source of revenue that protects local communities.”

The Land and Water Conservation Fund

The Land and Water Conservation Fund was set up in 1965 as a means to have a dedicated funding source for preservation and development of outdoor public recreation areas and to ensure that Americans have access to them. As the Dept. of Interior explains, LWCF is “funded by revenue from offshore oil and gas leases.” The LWCF receives no tax revenue contributions and GOM oil and gas production funds almost the entire LWCF.

This has translated to about $3.9 billion and more than 49,000 projects across the country since LWCF’s inception. According to DOI, the competitive state grants that communities compete for can be used for:

It’s also the primary funding used by the federal government to acquire more land “for the benefit of the public.” In other words, the most important program for the U.S. government to purchase, maintain, rehabilitate, conserve and preserve our federal lands, relies on funding from the Gulf, not taxpayers.

But it goes beyond that too:

The LWCF doesn’t just fund federal lands, it’s become a key funding source to plan, build and enhance parks and other outdoor recreation facilities for underserved communities. The LWCF’s Outdoor Recreation Legacy Partnership uses royalties from oil and gas development on federal lands and waters, (i.e. GOM), to achieve this. Since 2014, Congress has appropriated and matched $70 million, resulting in $140 million for the fund that has been used to benefit more than 30 cities across the country. As The Hill reports:

“Denver is using its grant to develop a 4.5-acre open-space park on once-vacant land offering both recreation and youth science education opportunities. Portland, Ore., used a $500,000 grant to help create Thomas Cully Park located in a predominantly minority and low-income area that has limited outdoor recreation opportunities. And Madison, Wis., used a grant to build the six-acre McPike Park on a former industrial site.

“Future projects include the transformation of a vacant property in Atlanta that connects an underserved neighborhood to the BeltLine trail network; the development of 13 acres of new parkland along the Delaware River waterfront to improve access for nearby distressed and underserved communities in Camden, N.J.; and the development of a new 3.5-acre park on a former industrial site along the Mississippi River in a low-income neighborhood in Minneapolis.” (emphasis added)

The legislation that provided dedicated funding for the LWCF also dedicates a portion of the royalties generated through mineral leasing on public lands towards paying down the National Parks Service’s maintenance backlog, estimated to be $12 billion. Completing these long-delayed projects helps to preserve the parks for future generations of Americans.

The Gulf of Mexico Energy Security Act – a revenue-sharing model for oil- and gas-producing Gulf states – is revenue generated from GOM oil and gas development that has to be used for coastal conservation, restoration and hurricane protection in these states. In FY2020, GOMESA distributed:

“Revenues from oil and gas activity in the Gulf of Mexico are a primary funding source for critical coastal restoration and hurricane protection projects to help make our community safer and stronger. The Gulf of Mexico Energy Security Act, or GOMESA, allows Gulf states to share an offshore revenue generated from oil production.  To data, GOMESA has allowed over $300 million to flow to states primarily for coastal restoration and hurricane protection. In fact, 34 percent of Louisiana’s Coastal Protection Office is funded through mineral revenues. These funds are invested in projects that better protect our communities, our coast, and our culture. Gulf of Mexico energy production is critical to national security, our national economy, and conservation of wildlife and public lands from sea to shining sea literally.

“That narrative that we must choose between energy and environment is fundamentally flawed. In Louisiana we know that we don’t have to choose.” (emphasis added)

A Leasing Ban Will Be Detrimental To These Programs

Halting new leasing or banning leases outright puts all of this at risk. According to a recent study from the National Ocean Industries Association, by 2040, offshore oil and gas production would decline by more than 20 percent if BOEM stopped holding lease sales in 2022.

The study also estimates that average employment supported by the industry would fall by 28 percent and lower GDP by $22.1 billion. Policies that restricted permitting for existing offshore leases would further restrict production if enacted.

While halting lease sales would cut funding to these and other conservative projects, with accompanying negative impacts on the economy and environment of the Gulf Coast, it would have little impact on reducing emissions or improving air quality. In a recent webcast, Gov. Bel Edwards explained that he was “working hard” to persuade the Biden administration to relax its leasing moratorium because of the adverse effects it would have on the environment:

“I think there’s a strong case to be made that there are advantages for the environment to produce oil in the Gulf as opposed to other areas, and we’re going to make that case as best we can.”

Offshore production results in fewer emissions than other U.S. oil and gas plays. In part this is because federal regulations require offshore operators to recover and sell all production, including gas and vapor. This means that venting and flaring, which have been controversial topics for onshore production, are not used offshore, further reducing emissions.

As lawmakers and representatives from the Gulf Coast know, policies to curtail offshore energy production will have a serious negative impact on states and communities across the country. At the moment, leasing in the Gulf is paused, not banned outright, but this only goes to show the full scope of impacts that a permanent or long-term leasing ban could have.