The Center for American Progress (CAP) recently published a “new” report on oil and gas-related emissions that is virtually identical to the one it released just six months ago. Also virtually identical are the problems that plagued CAP’s earlier report, which Energy In Depth documented last October.

It’s well known that CAP is funded by a number of anti-fracking foundations such as the Rockefeller and Tides Foundations. But what’s most notable about CAP’s report is that the data were obtained from a report conducted by Stratus Consulting, an organization that was roiled in controversy after falsifying data to support an extortion campaign targeting Chevron in Ecuador.  When the facts finally came to light about Stratus’s (possible criminal) complicity in preparing bogus technical reports for the litigants, the firm was forced to publicly recant its work and offer an apology.

Also interesting is the timing here. CAP decided to recycle its report just a day before the Obama administration unveiled its new rules for hydraulic fracturing on federal lands, which leads to the question: could this be a classic case of political cover from a presumed “third party” ahead of the release of a controversial new regulation?

Considering the players involved – and the timing – it should come as no surprise that the CAP report makes scary claims about oil and gas emissions that contradict the findings of the U.S. Environmental Protection Agency (EPA), which reported that emissions have been substantially declining – a finding that, if anything, environmentalists should cheer.

Let us compare the September 2014 Stratus report, upon which the October 2014 CAP report was based, and the newly-released CAP report. As you can see, the “new” report is anything but new. 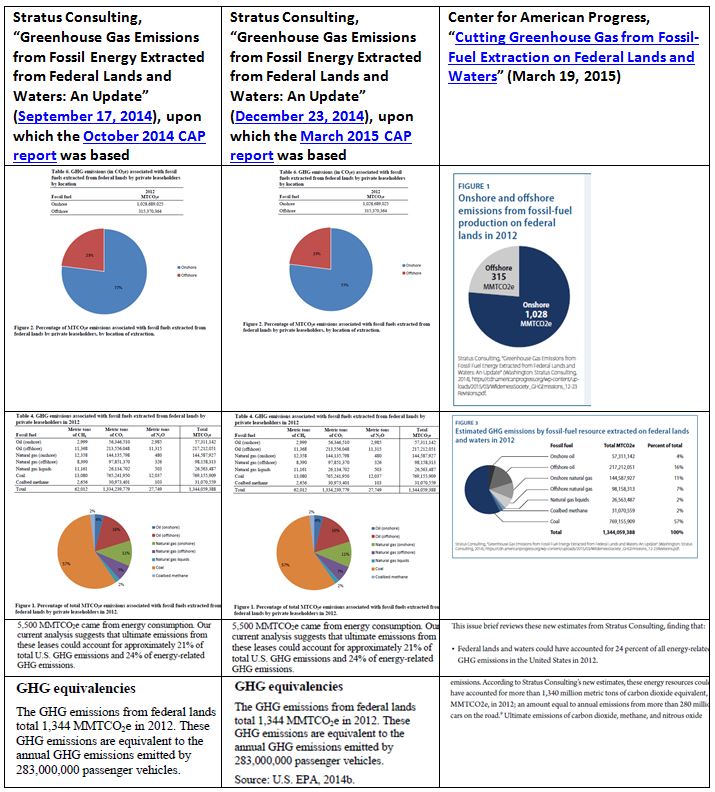 Here are just a few of the flaws in the report:

Fact #1: CAP claims methane emissions are increasing even though production on federal lands has dramatically decreased

The 2015 CAP report claims that the “estimated emissions of onshore oil [extracted on public lands] increased 22 percent from 2010 to 2012, and estimated emissions from onshore natural gas liquids increased more than 25 percent during this period.” CAP’s report last year makes a similar claim, saying methane emissions have “significantly increased over the past five years.”

For methane emissions to increase the way CAP claims they did, either production on federal lands and waters ramped up dramatically, or emissions from existing production somehow increased exponentially – neither of which is the case.

First, production on federal lands and waters has dropped significantly in recent years. An April 2014 report by the Congressional Research Service (CRS) emphasized that the American energy renaissance has been unfolding primarily on non-federal lands. The report says that since 2009,

As for oil, data provided in the CRS report indicates that onshore and offshore oil production on federal lands decreased by 16% from 2010 to 2013.

Since oil and gas production has been falling on federal lands, the only way emissions could have increased, as CAP claims, is if emissions from existing production intensified by leaps and bounds – which did not happen either.

In fact, the EPA credits the oil and gas industry’s operational improvements and voluntary implementation of new technologies as the major reason for the recent decline in emissions:

Previously, the EPA has applauded the industry for adopting new technologies to reduce methane emissions and making development cleaner, safer, and more efficient:

The EPA’s findings support a study by researchers at the University of Texas (UT) in close coordination with the Environmental Defense Fund (EDF), which finds that methane emissions rates correspond with the EPA’s estimates and are slightly lower than previously thought:

Instead of using data from the EPA or from the UT/EDF study, CAP and Stratus instead relied on the same inaccurate and misleading data produced by anti-fracking researchers for both reports.

In response to CAP’s October 2014 report, EID explained why the data Stratus used were faulty:

For their “low” estimates, the researchers used data from EPA. The only problem is that they pulled those data from the pages of a deeply-flawed study written by anti-fracking activists Tony Ingraffea and Robert Howarth. Although they had EPA’s latest methane emissions data – and we know this because they cite EPA’s 2014 report on overall emissions when it suited their purpose – they decided instead to use methane estimates from an EPA report that’s three years old. That’s important, because in subsequent reports the EPA revised downward its estimates of methane considerably. In other words, the Stratus researchers deliberately relied on outdated information that suggested methane “leaks” are higher than they actually are.

The other studies that the researchers use for the “harmonization” include the infamous Ingraffea and Howarth methane study, which has been thoroughly debunked, receiving wide criticism from the scientific community.  Even President Obama’s former Secretary of Energy, Steven Chu (a Nobel Prize-winning physicist), said of the Ingraffea/Howarth study: “we didn’t think it was credible.”

That’s not the only flawed Ingraffea/Howarth study the researchers consult, either.  The highest leakage rates come from a report led by Dana R. Caulton in conjunction with Ingraffea and Howarth.  In that report, the researchers relied on data from four flights over southwestern Pennsylvania and ran modeling exercises on the data to determine the source.  Their highest methane readings were over Greene County, an area that also happens to be the largest coal producing region in the entire state.  A number of state laws require that coal mines must have methane ventilation systems to prevent explosions and to protect workers.  The researchers noted the presence of coal mines, albeit stuffed away in the supplemental information section.

A National Oceanic and Atmospheric Administration (NOAA) report led by Gabrielle Petron, which found a leakage rate of 7.7 percent, also from highly uncertain flyovers in the Denver-Julesburg Basin, received a lot of pushback from the scientific community.   In a paper in the Journal of Geophysical Research, Michael Levi, energy and environment fellow at the Council on Foreign relations, said that the study’s findings were “unsupportable” based on what he terms the “wrong interpretation” of the data. Levi argues that the emissions rate is a fraction of what Petron and her fellow researchers found.  Among NOAA’s errors of analysis, according to Levi, is that “Colorado has imposed tough rules on methane emissions since the NOAA data was collected in 2008.”  Later, the Environmental Defense Fund said “conclusions should not be drawn about total leakage based on these preliminary, localized reports.”

Finally, Stratus Consulting cites another NOAA report led by Anna Karion, which found leakage rates as high as 11.7 percent.  While EID has the full story on this study here, suffice it to say that among the study’s chief shortcomings is the fact that it measured methane from only one day of data from a three hour flight over only one oil and gas field in the Uintah Basin in Utah with absolutely no way to determine where the methane is coming from.

In other words, Stratus Consulting – and thereby CAP’s conclusions – are drawn primarily from studies finding high emissions, which have been widely criticized for their dubious methodologies, while ignoring the best available data on methane emissions, notably EPA’s latest data and the University of Texas/EDF’s direct measurements.

Because Stratus, and by extension CAP, did not have data on the amount of natural gas that is vented or flared, they simply make assumptions like “it is clear that the volume of wasted gas is high” and “the resulting methane pollution is a major problem.” They then make the wildly incorrect assumption that all natural gas is vented and flared, even though doing so, for producers, would be akin to burning profits:

What CAP and Stratus conveniently ignore is that methane is a valuable commodity in itself that producers can sell, as the Wall Street Journal explains:

“[M]ethane is not a byproduct of burning natural gas like CO2. The hydrocarbon mixture laymen call natural gas is primarily composed of methane itself, and leakages mean drillers and transporters are losing the valuable commodity they are trying to sell. The economic incentive to capture CH4 has translated into rapid technological progress, and emissions are declining in every significant basin from Texas to North Dakota to Appalachia as more efficient techniques spread throughout the industry.” (emphasis added)

“More than half I believe now of the current frack jobs are so-called green completions, where the methane is captured and is for economic benefit.”

As EID wrote in response to CAP’s earlier report, Stratus’ scenarios of 100 percent flaring and venting are 100 percent bogus:

In other words, not only are the numbers likely already inflated, the researchers also gain their estimates from scenarios of 100 percent flaring and venting, which are not even within the realms of reality.

That said, even if there were more venting and flaring happening on federal lands, the prescription that CAP would no doubt support – increased federal rules – would likely be counterproductive. Kathleen Sgamma of the Western Energy Alliance explained the reason to E&E News, which summarized her remarks:

Sgamma said there is generally more venting and flaring on federal and Indian lands compared with private and state lands due to the difficulties in obtaining rights of way across the federal estate to capture and transport the natural gas. (emphasis added)

The main reason, according to Reuters interviews and reviews of regulations, is simple: a Byzantine web of state and federal agencies who must sign off on new pipelines. (emphasis added)

Unwilling to put in the work to improve upon – or even address – the problematic inadequacies of their previous work, CAP and Stratus just recycled old reports and called them “new” and “updated.” The thing is, old news, repackaged, is still old news – and still as inaccurate as ever.