After months of political theater from national ban-fracking activists at Colorado Oil and Gas Conservation Commission (COGCC) hearings, it appears the commission has adopted a new process to help ensure constructive dialogue and increase opportunities for public comment at its meetings.

Leaders of “Keep-It-in-the-Ground” (KIITG) groups don’t exactly seem to be thrilled with the change. The Colorado Independent reports that “next time you want to voice an opinion or concern to state oil and gas regulators, you’ll want to plan ahead.” As a general rule of thumb, isn’t it wise to “plan ahead” before you speak, whether it’s on oil and gas or any other topic? Just saying… but that’s neither here nor there.

Activists complained to the Colorado Independent that although the hearings have been “a pretty chaotic experience” these new rules are “shameful” — more than likely because they could pose difficulty in staging more theatrical stunts.

Micah Parkin, executive director of 350 Colorado, and one of the ringleaders for the group who is resurrecting a failed ballot measure once again in 2018, told the Colorado Independent about her grievances with COGCC’s new streamlined public comment procedure.

“They specifically reference that it’s in response to so many people turning out to these hearings,” she says. “As more and more of the public is trying to be heard, they’re choosing to listen less, not more… It’s really quite shameful.”

An anti-fracking activist out of Broomfield commented on the COGCC’s new rules as reported by the Colorado Independent:

“Broomfield resident Jean Lim, who has attended multiple COGCC hearings over the past year and a half in response to oil and gas development near her neighborhood, says she has witnessed public comment periods go well over two hours. She admits that the packed meetings can be ‘a pretty chaotic experience,’ but doesn’t think the new policy will change that.”

EID has witnessed firsthand many of these theatrical performances by ban-fracking groups. Recall the meeting where activists wore masks. Yes, medical masks were passed out by an operative from D.C.-based national anti-fracking group Food & Water Watch (F&WW), who told activists to decorate their masks with anti-fracking rhetoric meant to symbolize the “toxic” air in Colorado caused by what one reporter called “oil fracking,” whatever that is. 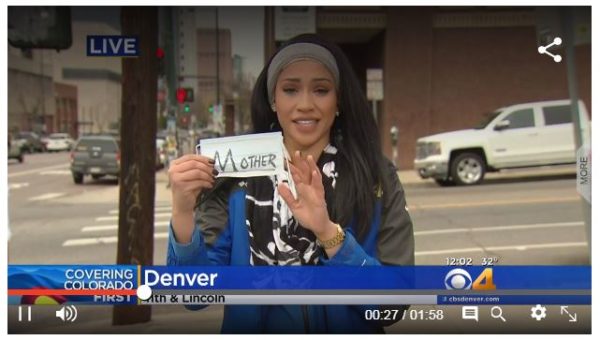 To be sure, the anti-fracking theatrics aren’t exclusive to the COGCC hearings — KIITG activists perform their stunts everywhere, with an eye on getting media attention.

As another example, there was the recent PR fail made by anti-fracking group East Boulder County United, which protested at the wrong house. 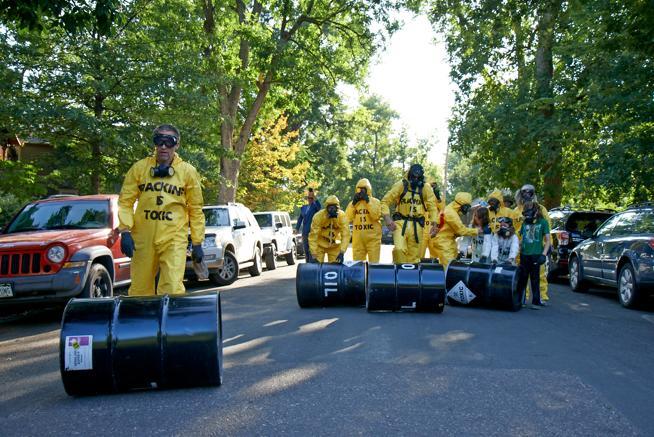 But it appears many of these bad actors were not in attendance at the last COGCC flowline rulemaking hearing on Jan. 8 and 9, because as EID noted, there was a noticeable lack of the usual political theatrics by national anti-fossil fuel groups. In fact, the empty seats even caught the attention of reporters like Colorado Public Radio’s (CPR) Grace Hood, as noted in her tweets from the hearing.

Cue Alanis Morissette’s song “Ironic” – because isn’t it a little bit ironic that activists are complaining about the new process even though barely any of the usual suspects bothered to show up to the last COGCC flowline rulemaking hearing, which was moved to a larger venue to accommodate public interest. Another third-party voice highlights the phenomenon of anti-fracking activists leaving empty chairs open at a COGCC meeting earlier this month. Check out this comment on “Wrong Door” anti-fracking activist group East Boulder County United’s (EBCU) Facebook page where the group shared the Colorado Independent’s article:

So yes, in the past – aside from the last COGCC flowline rulemaking hearing – many of the COGCC public comment periods have in fact been “pretty chaotic.” With that said, the implementation of the COGCC’s new public comment procedure really shouldn’t come as a shock to the national anti-fracking activists who for months have used and abused the COGCC hearings process to capture media attention, deploying various political stunts in an effort to gain headlines.  The new process should increase discussion to include more of the public, not just the activists.