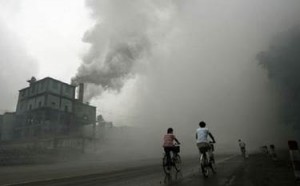 Coloradans Against Fracking is trying to scare the public using emissions data from Tianjin, reportedly the most polluted city in China. Photo credit: Open.Salon.com

Coloradans Against Fracking – the latest iteration of the Washington, D.C.-based Food & Water Watch’s campaign to ban hydraulic fracturing – has only just launched and is already resorting to the usual desperation tactics in order to scare people on the Front Range about benzene.

Karen Dike of Coloradans Against Fracking claims in a recent blog post that benzene is one of the so-called “dangers of fracking.” However, the blog leans heavily on a number of dubious reports written and peer reviewed by anti-fracking activists, while ignoring a bevy of credible research that does not support her claims.

Ms. Dike’s assertions on benzene hinge on a study spearheaded by the anti-fracking group, Global Community Monitor (GCM) and peer-reviewed by anti-fracking activists, including Sandra Steingraber, the co-founder of New Yorkers Against Fracking. The study uses methods that have been found to be scientifically unsound: the researchers collected air samples in buckets lined with Tedlar bags.  When this same group released a similar study using the same bucket method in Durango, Colorado, the Colorado Department of Public Health and the Environment (CDPHE) found numerous problems with the research, leading them to conclude:

“There are some serious technical deficiencies in the study.”

Dike also references a study by ShaleTest, which claims oil and gas development is polluting the air near playgrounds. But a closer look at the results shows that the report relies on dubious research methods and less than honest comparisons. Specifically, ShaleTest claims to have detected benzene at various Texas playground locations using air sampling on a single day at each site. As Energy in Depth has previously reported, they compared a single day of short term samples to long term thresholds for exposure, resulting in a skewed data set. ShaleTest had been admonished by the Texas Commission on Environmental Quality (TCEQ) for a similar study employing the same research methods. When the TCEQ looked into that report, they specifically cited its faulty methodology, stating that “it is not scientifically appropriate” to compare short-term results against long-term thresholds, as the ShaleTest study had done.

Another study Dike references claims that exposure to benzene can “cause changes in sperm that can cause birth defects.” What Dike leaves unmentioned is that the study was based on data on factory workers in Tianjin, China, which one reporter described as “China’s most polluted city.” The emissions in China would be a far cry from those the United States, which has stringent air quality regulations, especially for the oil and gas industry. Suffice it to say, Colorado’s Front Range communities do not face the same experiences as Tianjin locals who “dare not go outside without an air filter face masks” because the “air is so thick with sulfuric gases and coal dust.”

Quite the opposite, in fact. During his expert testimony to the Colorado oil and gas task force, Dr. Larry Wolk, the Chief Medical Officer and Executive Director of the Colorado Department of Public Health and Environment (CDPHE), spoke about VOCs from oil and gas wells:

“They’re certainly lower than what you would see or measure in a normal indoor residential environment.  So I’m going to say that being inside your home, as a rule, you’ll probably have a higher risk of VOC exposure, or VOC affecting your health, than being outdoors in an oil and gas-rich environment.”

To achieve its goal of trying to scare people across the state, Coloradans Against Fracking relies on a few hand-picked studies conducted by its friends and allies in the “ban fracking” movement. Yet a look at research from state health officials, regulators and other credible agencies tells a different story. Here are just a few reports that have used scientifically appropriate methods finding no credible threat to public health from shale development:

“Ban fracking” activists have been latching onto increasingly desperate tactics as their anti-energy agenda gets repeatedly rejected by elected officials like Gov. John D. Hickenlooper (D) and Gov. Jerry Brown (D), environmental regulators inside the Obama administration, and state-level environmental regulators across the country. Coloradans Against Fracking’s post – which pushes a version of reality that directly contradicts the facts and the findings of state and federal regulatory agencies – is just the latest example of their misinformation in action.