It appears that Colorado anti-fracking activists’ 15 minutes might be up. The scene earlier this week at the monthly Colorado Oil and Gas Conservation Commission (COGCC) meeting was pretty standard, as activists lined up in the hallway waiting to give public comment as part of their monotonous, almost monthly rally against the COGCC. But there was a huge difference between this meeting and the one before it — there were no media cameras to be found. Of course, the anti-fracking activists’ show still went on even without the presence of the media spotlight they so obviously covet.

The usual suspects like D.C.-based national anti-fracking group Food & Water Watch (F&WW) were at this past Monday’s COGCC meeting held in Denver, where the same F&WW operative who spoke at the last COGCC meeting used her public comment time at last Monday’s meeting to call for COGCC director Matt Lepore to resign or be fired by Gov. John Hickenlooper.

It was a roller coast performance, as some activists were angry and saying things like “shame, shame, shame on all of [COGCC commissioners] you cowards,”  while others rallied against the oil and gas industry by delivering a catchy little jingle. See below.

In addition to the lack of media attention at Monday’s COGCC hearing in Denver, anti-fracking activists over in Boulder County hosted a press conference in front of the Boulder County Courthouse regarding a recent incident in which activists tried to show people “the light” as it pertains to fracking, but instead one of the anti-fracking protester ended up lit with litigation instead. 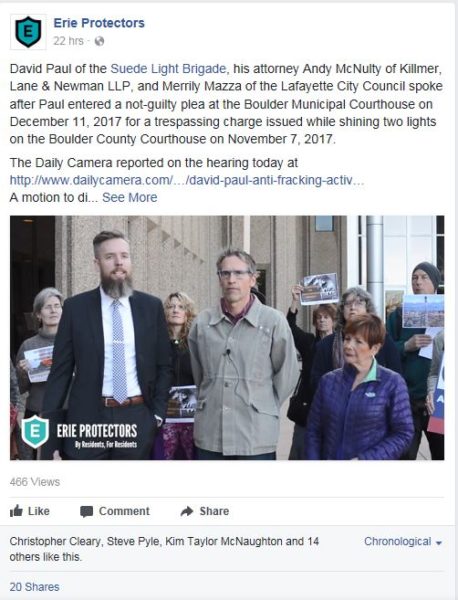 Separating out the Facts

Although there were no cameras on deck at the COGCC meeting, one reporter was there. Cathy Proctor, energy, environment, and transportation reporter for the Denver Business Journal, attended the COGCC meeting and reported on the facts:

“The majority of the people who signed up to speak at the Colorado Oil and Gas Conservation Commission’s regular meeting Monday hammered the organization for permitting energy companies to drill in the state.”

The Denver Business Journal went on to report that “in contrast, a few representatives from Colorado’s business community also spoke,” to give the full picture that helps separate facts from drama during Monday’s December COGCC meeting:

“Dan Haley, president and CEO of the Colorado Oil & Gas Association (COGA), thanked the commissioners ‘for your service to the COGCC’ on behalf of the trade association’s 285 members, while some in the crowd snickered. Haley noted that the state’s oil and gas industry is coming out of a downturn and ‘people and oil and gas rigs are going back to work. We are proud of the energy that we are able to produce in Colorado and our members in 2018 will continue their focus on safety. We’ll continue to deal in the facts and we all want what is best for our families and to live in a state that’s healthy and where we all consume energy,’ Haley said.”

“Nicholas Colglazier, the director of the statewide business group Colorado Competitive Council (C3), spoke on behalf of the council and the Denver Metro Chamber of Commerce. Colglazier said Colorado’s way of doing business focuses on the ‘common ground’ and has led to ‘the most robust [oil and gas] rules in the nation’ and a strong industry that pays billions in taxes and supports 100,000 jobs. ‘We’ve shown that caring for the environment and harvesting resources is not mutually exclusive,’ he said, saying the council and the chamber supports the industry.”

The Colorado Business Roundtable weighed in with public comment at Monday’s COGCC meeting, shining a light on what the oil and gas industry means to the broader Colorado economic landscape.

“The Colorado Business Roundtable understands the importance of the energy sector to Colorado’s economy. We support a responsible, balanced regulatory framework that allows energy production to thrive in a safe, environmentally conscious environment. While passions and emotions run high, we believe all Coloradans can benefit from a well-regulated industry that values technological advances, innovative approaches and a workforce that cares not only about the environment but their communities. Science and fact based decision making should drive the narrative. Sensible energy production needn’t be a zero sum and energy development has a long history of cooperation and peaceful co-existence with communities all across the west. While we respect Coloradan’s rights to voice their opinions, the over-the-top rhetoric and inflated charges of opponents does nothing to foster a spirit of collaboration, open dialogue, and compromise. Workers in oil and gas are our neighbors; coach sports teams, lead scout troops, and volunteer in schools. We should value the contributions, economic activity and energy independence that we recognize from responsible energy production.”

Bottom line: all show, no facts

The COGCC public meeting further confirms that fracking opponents’ theatrical stunts will continue as they seek out the attention of the media by stepping up the ante every chance they get. Despite anti-fracking activists efforts to upstage members of the business community who spoke at the meeting with their screams, chants, posters, and light shows – Monday’s COGCC meeting proves, cooler heads will always prevail.