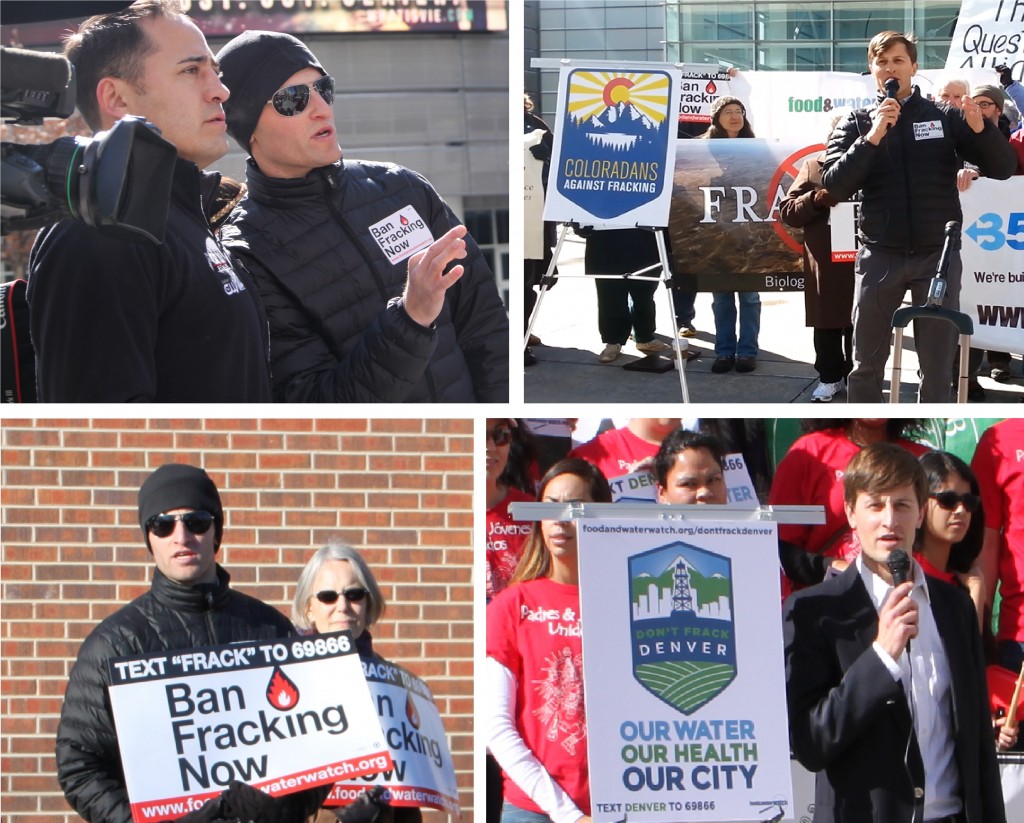 Food & Water Watch’s Sam Schabacker demands a statewide energy ban on behalf of “Coloradans Against Fracking” earlier this week (top) and at a Jan. 15 rally in Greeley (bottom left), and a local ban at a Feb. 10 press conference on behalf of “Don’t Frack Denver” (bottom right). Photo credit: Energy In Depth

In a Colorado Public Radio interview, Gov. John Hickenlooper (D) plainly rejected the idea of a ban on fracking in Colorado. His remarks delivered a stinging rebuke to Washington, D.C.-based political activist group Food & Water Watch, which, after creating Local Control Colorado, Frack Free Colorado, and Don’t Frack Denver,  launched its latest campaign for a statewide oil and gas development ban under the new banner of “Coloradans Against Fracking” earlier this week.

In his interview, the Governor explained that attempts to ban fracking would carry “grave consequences”:

“I don’t think we can legally do that without grave consequences.”

He challenged the fundamental underpinnings of “ban fracking” campaigns:

“We can’t find examples in Colorado, or more than one or two examples, where fracking, in any sense, has caused harm or been sufficiently dangerous to the public that would justify us to ban it.”

He explained that bans on fracking would pose both an economic and legal threat to Colorado:

“If you ban fracking, and therefore eliminate, I don’t know, 80 or 90 percent of the oil and gas activity, not only do you threaten a $20 billion a year industry, not only do you threaten 100,000 jobs, but you threaten that a court will come back and hold the state of Colorado liable for the financial penalties of that taking. … It wouldn’t just be chambers of commerce; I think there would be all manner of elected officials who would say, ‘Boy, this puts the state in serious jeopardy.’”

Specifically, he touched on how bans on fracking would infringe upon mineral rights, an issue that has been spotlighted by the Colorado oil and gas task force before:

“Gwen [Lachelt, co-chair of the task force] and the environmental community want to give the local elected leadership the right to say ‘no fracking’ if there’s people around. That’s taking something away from that mineral right owner [that he or she’s] had for all these years.”

Finally, the Governor praised the progress made and the strides taken by the oil and gas industry on the whole:

“If you go back and look at the history of oil and gas over the last 50 years in America, it has been continuous improvement, as we develop new technology that allows us to operate cleaner.”

This interview was not the first time Gov. Hickenlooper has spoken out strongly against “ban fracking” campaigns. When Food & Water Watch and other activist organizations attempted to put anti-energy initiatives on the statewide ballot last year, the Governor called the measures “extreme,” described them as “radical ideas that have no place in our state Constitution,” and voiced his commitment to “doing whatever it takes to defeat them.”

Gov. Hickenlooper’s stance against “ban fracking” campaigns is shared by California Gov. Jerry Brown (D), who is considered a hero to the environmental movement and has rejected the “ideological bandwagons” of political activists who want to ban fracking. Gov. Brown even said that the activists campaigning to ban fracking “don’t know what the hell they’re talking about.”

Elected officials are not the only ones spurning activist endeavors to ban fracking; state regulators and officials within the Obama administration, too, have publicly dismissed “ban fracking” talking points. For example, Interior Secretary Sally Jewell says the activists who claim “fracking is dangerous and should be curtailed full-stop” ignore that “fracking has been done safely for decades.” Likewise, President Obama’s Environmental Protection Agency Administrator Gina McCarthy says “[t]here’s nothing inherently dangerous in fracking that sound engineering practices can’t accomplish.”

Hickenlooper’s unequivocal rejection of “ban fracking” initiatives during his Colorado Public Radio interview underscores yet again how the fringe ideology peddled by activist organizations like Food & Water Watch threatens working families, hurts the state economy, and ultimately has no place in Colorado.