On a day in which hundreds gathered at the state capitol to express opposition to Proposition 112, a well-known Colorado anti-fracking activist staged a media stunt centered on a frivolous lawsuit specifically designed to distract the media from that newsworthy event.

Guess which got more coverage?

Not only did the #NoOn112 rally receive zero media coverage, outlets such as the Denver Post, The Colorado Independent and Boulder Daily Camera gave a decidedly one-sided accounts of the lawsuit filed by activist Cliff Willmeng and sidekick Eddie Asher against Thornton councilwoman and acting mayor Jan Kulmann. Denver7 even led its 10 o’clock newscast with the story.

The justification for the lawsuit and all the subsequent hoopla? Willmeng and Asher claim Kulmann infringed on their First Amendment right to free speech by deleting their offensive posts from her Facebook page and blocking them.

Willmeng, who is co-founder of East Boulder County United and is well-known for his extreme anti oil and gas tactics (see examples here, here and here) explained the reasoning behind the lawsuit on his personal blog,

“Mayor Pro Tem Kulmann maintains an official Facebook page that supports fracking. She has repeatedly deleted anti-fracking posts and blocked people who comment on her Facebook page opposing fracking. This is an obvious free speech violation.”

But Willmeng fails to mention the fact that Kulmann hid the posts from public view because they were offensive in nature – not because she was attempting to inhibit free speech. As Kulmann explained in an interview with EID,

“I have posted on my page that I hide comments that are inappropriate or insensitive. I try to have civil discourse, and I hide people’s comments on both sides of every issue if they are not respectful to others.”

“They were personal attacks against me and others that work in the industry, instead of focusing on the issue. I actually asked a couple of times to end the conversation and when that was ignored, I blocked the person. The first gentleman, it wasn’t until the comments got derogatory, then I blocked him.”

“I hid comments before that, on that same thread that the person started. I hid comments that were negative towards him because they were not productive additions. They were anti-112 comments but they were derogatory towards the gentleman that posted, so I hid them. Once I blocked the individual who started the thread, all the comments went away. I never deleted anything. I think they’re all hidden still, I haven’t gone back and looked.”

Notably, Willmeng and Asher do not even live in Thornton and are not Kulmann’s constituents.

Furthermore, Willmeng’s hypocrisy regarding the First Amendment issue is simply stunning considering his anti-fracking tactics – which are surpassed only by his lengthy arrest record – have directly tried to stifle free speech and honest, open debate.

As Boulder Weekly recently reported, Willmeng spearheaded a hostile protest that literally forced the Lafayette City Council to shut down its June 19 meeting before it could vote on an ordinance that would have codified oil and gas regulations, but not ban development within city limits. 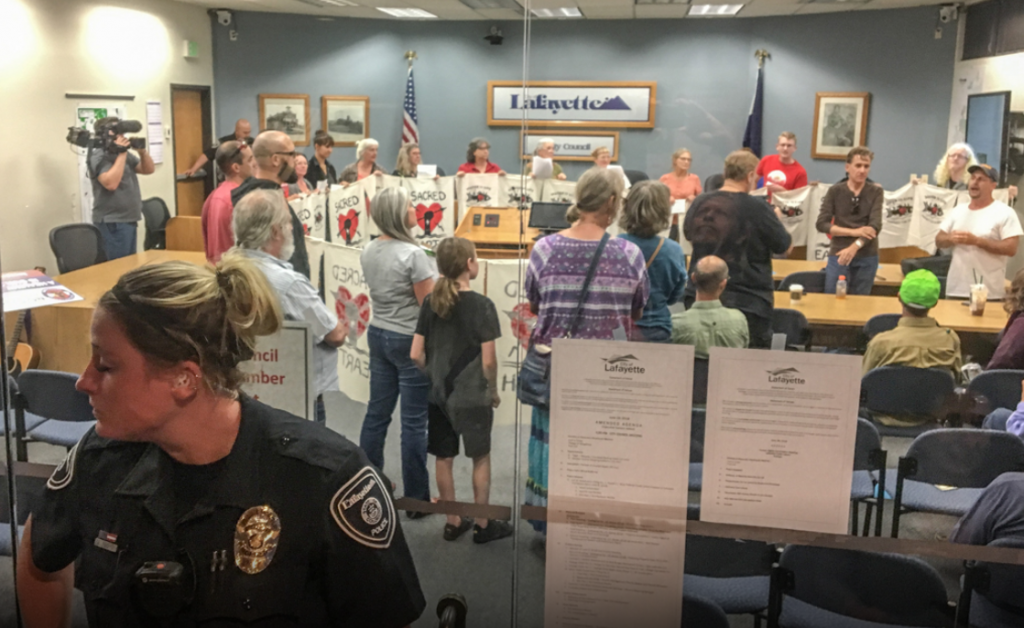 Willmeng even bragged to Boulder Weekly about the tactic,

“You know we’ve been saying for many years that fracking and oil and gas activity is a violation of the fundamental rights of the people of Lafayette, and we successfully intervened and rendered the Council unable to move those wells forward. So you know we look at it as a first step. It’s unfortunate we have to resort to such drastic measure, but for six years the Council has, at best, ignored us.”

“Cliff, I appreciate your passion, but, again, I need you to respect the fact that we have the floor, okay?”

Echoing what Kulmann told EID about Willmeng’s offensive Facebook posts, Lafayette Councilor Alexandra Lynch spoke out against the “inflammatory language” used by activists from Willmeng’s group in their opposition to oil and natural gas development during her remarks (3:10). Her remarks were greeted by jeers and heckles (3:10), which prompted shushes and comments like “let her speak!” from others (3:12), and which visibly rattled and upset her, as video footage shows (3:23).

Willmeng and his group is also notorious for staging “die-ins” and attempting to stage a protest at Boulder County Commissioner Elise Jones’ home, an extreme intimidation tactic that was overshadowed by the fact Willmeng and company went to the wrong house (doh!).

But Willmeng’s arrest record – which includes disorderly conduct, resisting arrest, harassment, trespassing, and obstructing police – is no laughing matter. That rap sheet hasn’t stopped him from running for elected office in Boulder County, where he hopes to become the first socialist Boulder County Commissioner. 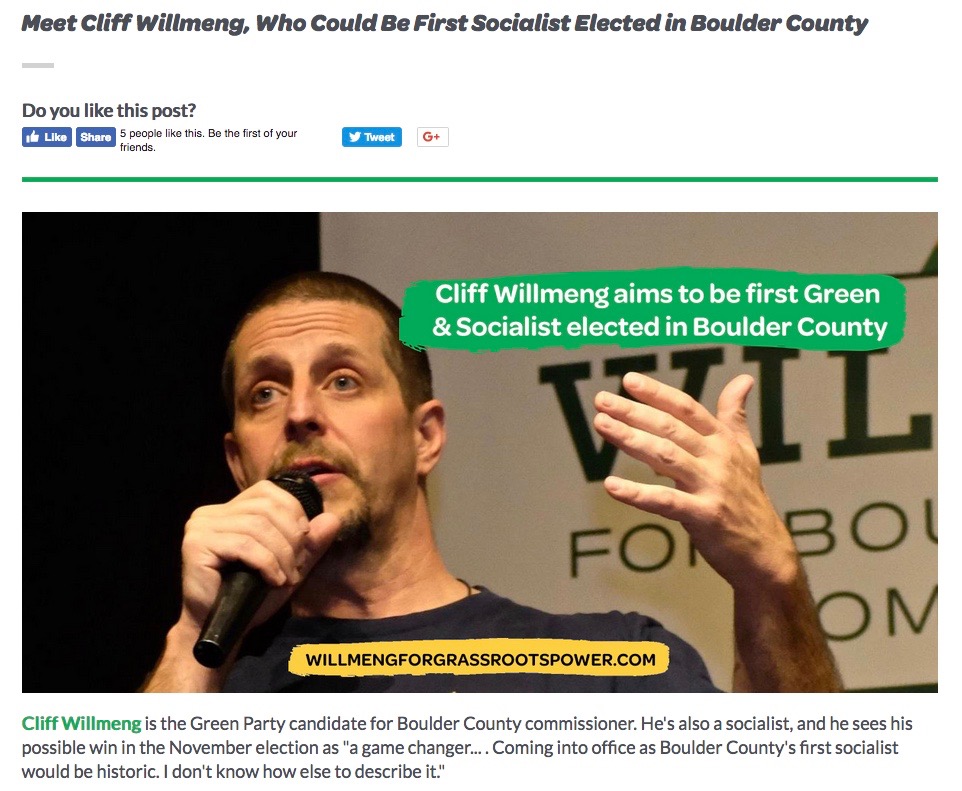 All of this noted, it seems reasonable to surmise that an event in which dozens of Colorado mayors – including former Denver Mayor Wellington Webb and mayors from the state’s other nine largest municipalities – spoke or shared prepared statements denouncing Proposition 112 would seem more newsworthy than a publicity stunt staged by a guy whose mugshot might be expected to appear under “fringe activist” in an encyclopedia. At the very least, both sides of the story regarding this frivolous lawsuit should have been told.