A recent Bureau of Economic Analysis (BEA) report detailing Gross Domestic Product (GDP) growth across metropolitan areas shows the strength and importance of the oil and gas industry to Colorado’s economy. The Denver Business Journal’s coverage of the report perhaps best captures the most important news for Denver residents: 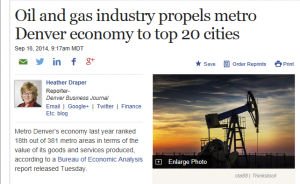 According to BEA’s data, Denver’s metro area saw 4.3 percent in GDP growth last year ranking the city 47th out of 381 metro areas. The natural resources and mining sector was the largest contributing economic sector with a 2.1 percent contribution to the percent change of real GDP. The industry significantly outpaced other economic sectors including finance, insurance and real estate, which showed the second highest contribution at .80 percent.

Even more impressive is that Greeley, Colorado ranked second in the nation for GDP growth with a rate of 10.1 percent.  As the press release to the report highlights, development in the Niobrara shale formation “contributed significantly” to Greeley’s GDP growth.

This report is the latest round of economic news showing strong growth for Colorado, thanks in large part to shale development. Without the oil and gas industry, Colorado’s economists would be telling a very different story.