New information uncovered by a conservative online newspaper reveals that a funding disclosure statement made by the Columbia School of Journalism was mysteriously added days after its now-infamous climate reports were published by the Los Angeles Times.

The quiet addition of funding sources was first reported today by the Daily Caller. The revelation is also noteworthy, given that the school’s dean just yesterday pointed to the disclosure as evidence that the school has always been transparent about its funding. A spokesperson for the Los Angeles Times said earlier this week that the newspaper had no need to include the disclosure in its stories, since it was presumably always disclosed on Columbia’s website.

Following an Energy In Depth review of online records from late last month that showed how funding from the Rockefeller Brothers Fund was not revealed by the Los Angeles Times, the newspaper has also quietly updated one of the stories to include the disclosure. This update, which is not included in the first story of the series, appears to have been made within the past three days.

Steve Coll, the Dean of the Graduate School of Journalism at Columbia University, penned a letter this week in response to concerns raised about stories from several of the program’s researchers, which were published in October by the Los Angeles Times.

One of the concerns was that the Los Angeles Times did not disclose the role that the Rockefeller Brothers Fund (RBF) — whose president declared earlier today in Paris a “moral imperative” to “end fossil fuel investments” — played in financing the project. This raises questions about whether the Columbia researchers had disclosed that information to the Times, or if the Times had purposefully omitted it.

In his letter, Coll says the funding “is prominently disclosed on the Project’s website.” But an archival review of the School’s website, specifically the fellowship program that produced the reports, shows that the disclosure was only added after one of the program’s reports had been published and concerns regarding transparency and objectivity were voiced by observers.

The first report from the Columbia researchers was published by the Los Angeles Times on October 9. But on October 10, the website of the Energy and Environment Reporting Fellowship did not disclose any of the funding sources for the report, according to an archived copy of the page obtained by the Daily Caller. The Fellowship did, however, tout its “first exclusive reporting piece in the Los Angeles Times,” linking directly to the story. EID was able to obtain the same archived page through the Internet Archive.

Since then, the fellowship’s website has been updated to include the financial connections to the Rockefeller Brothers Fund, the Energy Foundation, and other organizations. The Rockefeller Brothers Fund financially supports many groups that actively lobby against oil and natural gas development, including 350.org, the Sierra Club, and the Union of Concerned Scientists. It is also a major financial supporter of InsideClimate News. 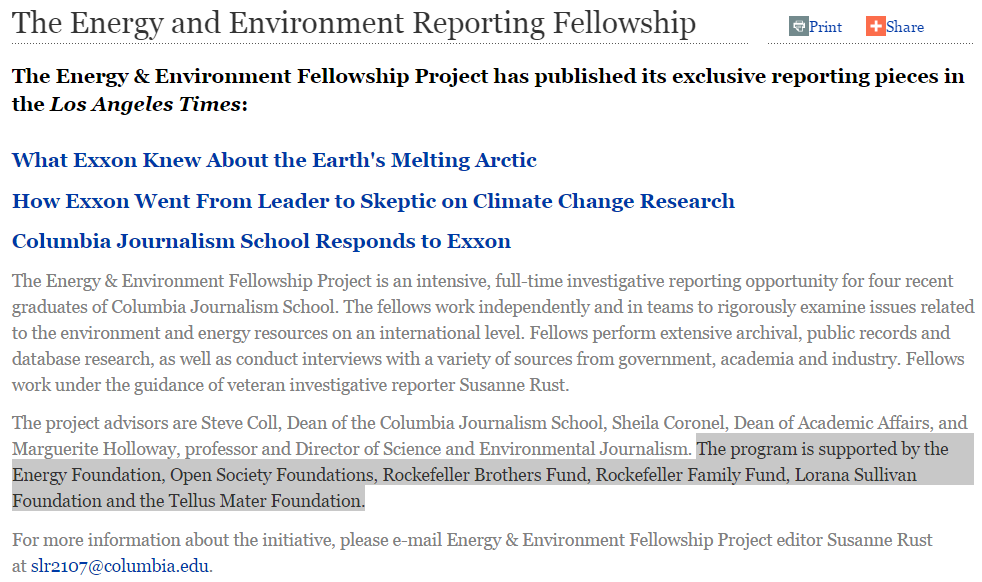 It’s unclear when the Columbia school updated its website to include the funding disclosure statement.

Earlier this week, a spokesperson for the Los Angeles Times, Hillary Manning, told POLITICO that the “multiple sources of foundation funding have no editorial control over that reporting,” referring to the Columbia project that produced the reports. Manning added that “a listing of the funders is readily available on the Columbia Journalism School website,” suggesting that disclosure precluded the newspaper from needing to disclose it as well.

But the Times quietly updated the second story this week to include a disclosure about the groups who funded the project, including the Rockefeller Brothers Fund:

The Energy and Environmental Reporting Project is supported by the Energy Foundation, Open Society Foundations, Rockefeller Brothers Fund, Rockefeller Family Fund, Lorana Sullivan Foundation and the Tellus Mater Foundation. The funders have no involvement in or influence over the articles produced by project fellows in collaboration with The Times. Details on the project, including its funding, are available here: http://bit.ly/1NjrN3M 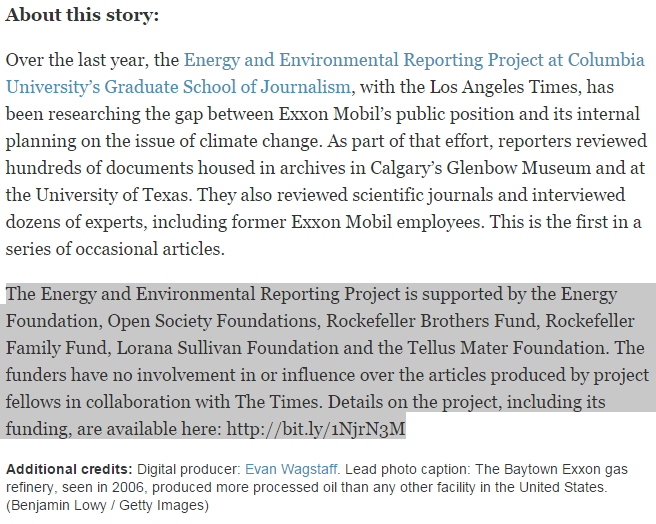 Current status of the “About” section of “How Exxon went from leader to skeptic on climate change research,” originally published by the L.A. Times on October 23, 2015. Funding disclosure addition highlighted in gray. Screen shot originally captured by the Daily Caller.

A review of the Internet Archive shows that the disclosure notice did not appear on the page as late as November 29 – just three days ago.

Screen capture from November 29, 2015, of the “About” section of “How Exxon went from leader to skeptic on climate change research,” originally published by the L.A. Times on October 23, 2015. Screen shot originally captured by the Daily Caller.

Despite the addition of new information, the story has no update or correction notice. The first story in the series, which ran on October 9, still does not contain the funding disclosure.

Current status of the “About” section of “What Exxon knew about the Earth’s melting Arctic,” originally published by the L.A. Times on October 9, 2015. Accessed on December 2, 2015.

The quiet additions of funding sources to the Columbia school’s website and one of the Los Angeles Times’ stories may raise additional questions about transparency, including why the Los Angeles Times suddenly deemed it necessary to disclose the connections to the Rockefeller Brothers Fund after publicly defending its position not to disclose. When did the newspaper learn that the reporting was funded by RBF, since Columbia did not disclose that information on its website when the first story was published?

It also remains unclear why only one of the stories published by the Los Angeles Times contains the disclosure notice, since both reports were produced by the same program and funded by the same entities.