Ohio Congressman Bill Johnson and newly appointed US House Majority Whip Steve Scalise took time out of their extremely busy schedules to tour eastern Ohio yesterday. In their travels, the Congressmen not only toured a well being developed by Pennsylvania’s Rice Energy, but also had the chance to learn how the natural gas is processed at the Utica East Ohio fractionator in Scio.

During the first stop of the morning – a Rice Energy well site in southern Belmont County – the Congressmen met with Daniel Rice IV, President and CEO, and Toby Rice, President and COO, to hear about their operations in Ohio and how they have contributed to the local economy. Rice Energy, founded in 2007, is based in Canonsburg, Pennsylvania. In addition to hiring local contractors in the area, Rice Energy employs over 200 people throughout the region.

The Rice brothers explained the entire the process, giving the Congressmen a better understanding of how they safely and responsibly develop the Utica Shale in Belmont County, where they have acquired 46,700 net leasehold acres. While touring the pad site, the Congressmen were also able to meet with Petta Enterprises. This company was started by Will Petta in 2010 and is based in Cambridge, Ohio providing rig and tank cleaning services for companies operating in the Utica Shale. 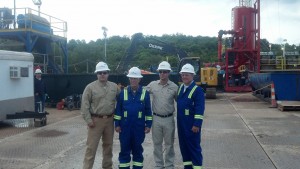 “Because of the oil and gas development in the Utica and Marcellus Shale, since 2011 we’ve seen oil and gas production here in Ohio practically double, we’ve got about 1,000 wells in Ohio, 500 are producing. And folks what does that mean? That means jobs.”-Congressman Bill Johnson

Processing natural gas liquids is not a foreign concept to Majority Whip Scalise. He represents the 1st district in Louisiana and sits on the House Energy and Commerce Committee, so it’s no surprise that he knows first-hand about the benefits of increased development in Ohio and across the country. 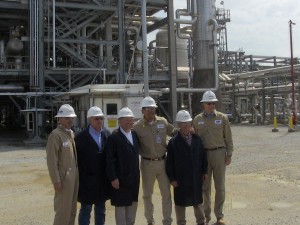 It was a good day for Ohio as two sitting members of the House Energy and Commerce Committee toured Ohio’s Utica Shale to see the promise oil and gas development is bringing back to the state. Not only is the oil and gas industry producing energy for our nation, but as the Congressmen noted, it is creating well-paying jobs for our residents.