UPDATE (9/10/18, 5:38 PM EST): A chart tweeted out Monday by the International Energy Agency (IEA) further illustrates the fact that the recent New York Times “shale bubble” op-ed was based on woefully outdated data. As the IEA tweeted,

The US 🇺🇸shale industry is at turning point after a long period on a fragile financial basis –appearing on track to achieve positive free cash flow for the first time ever this year, while production grows at its fastest pace ever https://t.co/LKO1SzyRIT pic.twitter.com/a3xJfpFy6O

The IEA also linked to a summary its “World Energy Investment 2018” which noted,

“The prospects of the US shale industry are improving. Between 2010 and 2014, companies spent up to USD 1.8 for each dollar of revenue. However, the industry has almost halved its breakeven price, providing a more sustainable basis for future expansion. This underpins a record increase in US light tight oil production of 1.3 million barrels a day in 2018.”

A recent New York Times op-ed suggests the United States’ newfound energy abundance will be short-lived based on the notion that surging tight oil development is not economically sustainable.

Penned by Bethany McLean, author of the soon-to-be-released book “Saudi America: The Truth About Fracking and How It’s Changing the World,” the piece’s hyperbolic headlines claim that, “The Next Financial Crisis Lurks Underground” and that “Fueled by debt and years of easy credit, America’s energy boom is on shaky footing.”

But as several third-party experts have pointed out on social media since the op-ed was published, a close analysis of the piece reveals McLean’s “shale bubble” narrative is premised on outdated data that in no way reflects the financial stability established in the shale industry since OPEC ended its failed price war two years ago. Furthermore, the authors’ contradictory statements lauding the industry’s resilience and ability to improve efficiency undermine her core argument completely.

Here is a look at the most egregious claims made in the piece, followed by the facts.

CLAIM: “Frackers haven’t proven that they can make money.”

FACT: Companies have clearly proven in 2018 that they can be profitable.

This fact was further confirmed by a recent International Energy Agency (IEA) investment analysis that finds:

“The US shale industry seems to have reached a turning point with the recent significant improvement in its financial sustainability.

“… we estimate that the shale sector as a whole is on track to achieve, for the first time in its history, positive free cash flow in 2018. This result is all the more impressive given the context of rising investment.”

The divide between Bordoff and the IEA’s polar opposite takes on the current financial state of the shale industry compared to McLean’s assertions can be explained by the fact that her analysis is based on outdated data from 2017. McLean’s analysis doesn’t take into account this year’s improved (and stable) commodity prices, nor the stability that several majors’ foray into shale since 2017 has yielded. As the IEA report notes:

“Structural changes also augur well for the sector. Recent consolidation, such as the recent USD 9.5 billion Concho-RSP Permian merger, and the increased participation of the majors and other international companies could bring significant economies of scale and accelerate technology developments, including through digitalization. Larger companies generally have a more robust financial structure and rely less on external sources of financing, so their shale investment will be less vulnerable to future downswings in oil prices and financial conditions.”

The U.S. E&P sector has evolved strategically in the wake of the downturn by prioritizing capital efficiency, free cash flow maximization and total shareholder returns over production growth. As leading independents have focused their portfolios, right-sized their capital structures, and streamlined operations, their respective financial positions have dramatically improved. RBN Energy recently noted the transformation among their coverage universe of 44 E&P companies in their ongoing series on 2018 cash flow allocation:

“ . . . instead of investing all of their cash flow into oil and gas producing assets, the E&Ps in our study group are curbing capital spending and instead dedicating funds to reward shareholders. We pegged incremental capital spending in 2018 at $2.3 billion, leaving over $22 billion in incremental free cash flow. We counted nearly $7 billion in new share repurchases, as well as another $710 million in newly announced dividend gains. Part of the remaining free cash flow will be used to reduce some of the $184 billion in debt that remained outstanding at the end of 2017.”

Technological and efficiency improvements have also led to breakeven costs dropping more than 42 percent since 2013. These are some of the reasons that every reputable expert is predicting record-shattering oil production not only this year, but over the next five years. Both Bordoff and Richard Meyer, American Gas Association Managing Director of Energy Analysis, noted in a Twitter exchange with McLean that her article was based on outdated data. 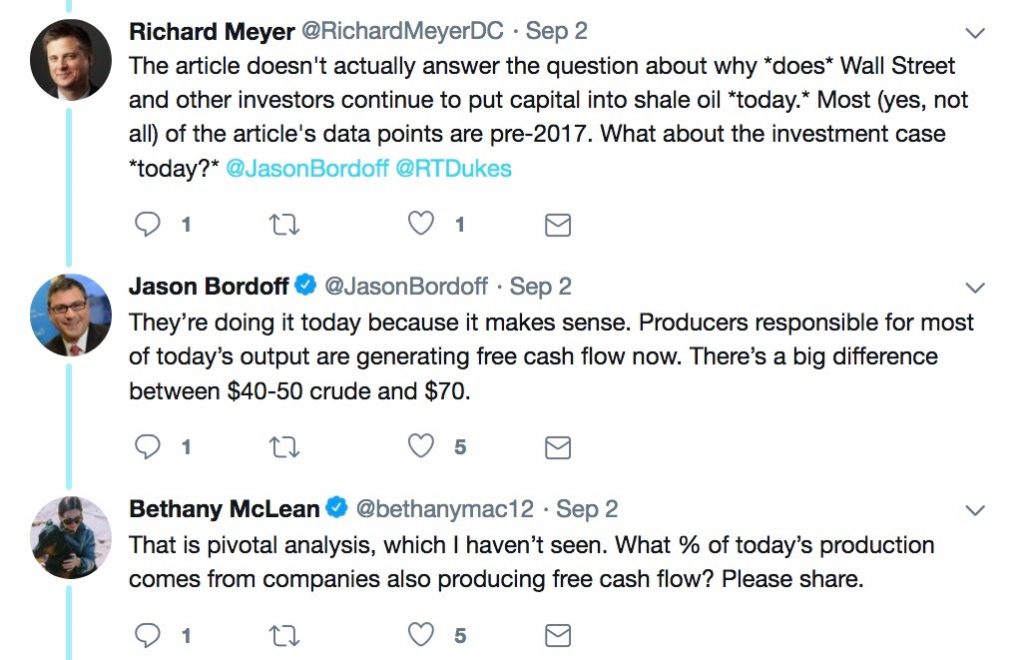 McLean is apparently unaware of a slew of recent media reports that confirm that a significant percentage of current production is coming from companies that are also yielding free cash flow. As Bordoff noted in a tweet,

McLean also opts to try to bolster her argument with an outdated assessment from a rather dubious source,

“In early 2015, another famous hedge fund manager, David Einhorn, went public with his skepticism at an investment conference. He had looked at the financial statements of 16 publicly traded exploration and production companies and found that from 2006 to 2014, they had spent $80 billion more than they received from selling oil.”

Einhorn happens to be a noted “clean energy” investor and fracking critic who donated more than $100,000 to former New York Attorney General Eric Schneiderman, the guy who was best known for spearheading the #ExxonKnew crusade before recently resigning after being accused of physically assaulting four women.

CLAIM: “Fracking is such a fragile industry that it is not hard to make it go bust.”

FACT: To the contrary, the U.S. shale industry has been “has been more resilient than anyone, including its proponents, would have dreamed.”

You don’t have to take our word for it — the above quote is taken directly from McLean’s op-ed! As Bloomberg News Chief Energy Correspondent Javier Blas noted in a tweet, the contradictory nature of McLean’s op-ed is baffling: 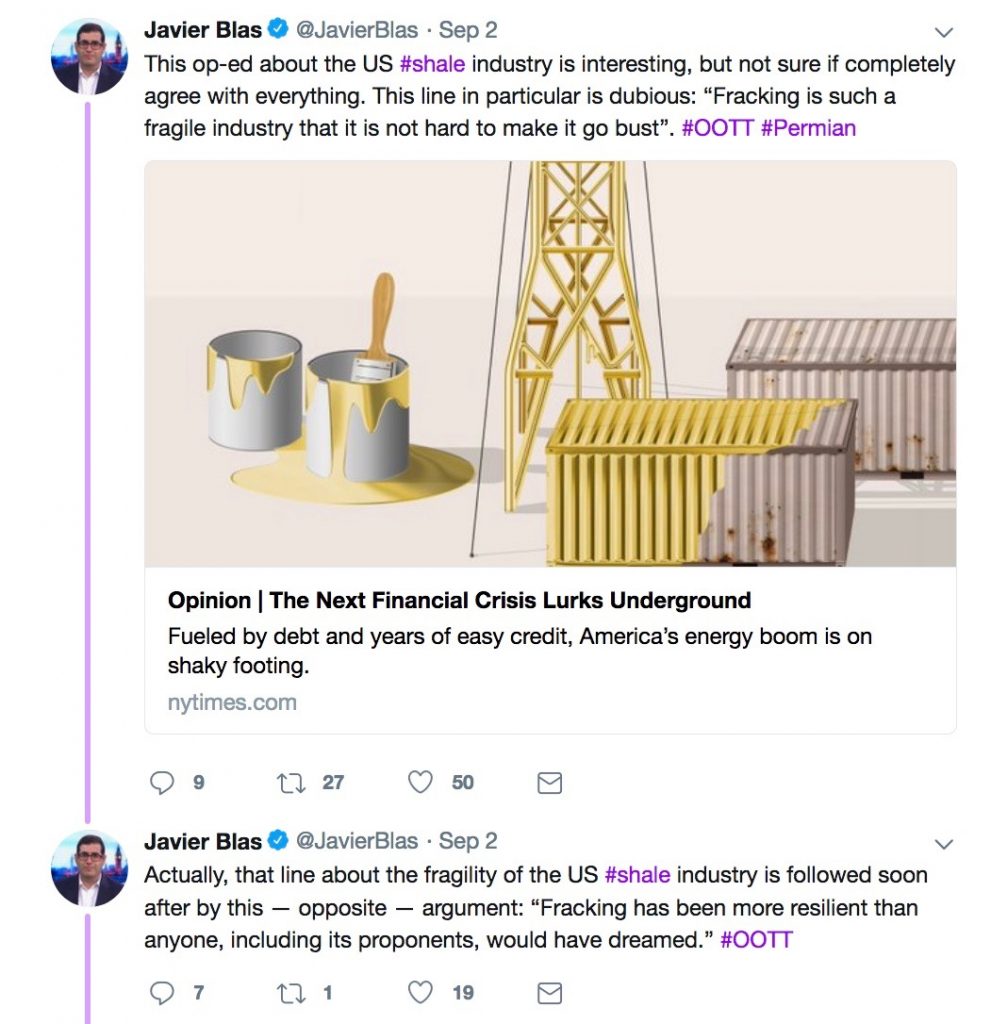 As Forbes contributor Michael Lynch recently noted, mighty OPEC can certainly attest to the fact it is “hard” to make the U.S. shale industry go bust,

“The price crash did cause shale oil production to slow, but it has since recovered and is growing rapidly at prices below $70. The same was true for shale gas. I reviewed a number of estimates for shale gas breakeven costs made before 2014, and the lowest was $4/Mcf. Yet the price has not been above $4 since July 2014, and production has continued to expand.”

McLean even suggested in a tweet that she’d change the wording of the above excerpt if given the opportunity,

As noble as McLean’s admission might seem to be, it’s pretty difficult to believe that she submitted her op-ed to the New York Times before she was absolutely certain about her word choice. Similarly, it’s difficult to imagine that she didn’t scrutinize every single word of the op-ed’s headline, “The Next Financial Crisis Lurks Underground” prior to publication, which brings us to our next claim…

FACT: “… the headline of the oped (sic) overstated that connection.”

Again, you don’t have to take our word for it — those are McLean’s exact words in response to her own op-ed! McLean tweeted in response to criticism of that hyperbolic headline,

To answer McLean’s question, companies are producing reasonable returns to investors. And even if rising interest rates are a factor moving forward, it shouldn’t present any sort of potentially catastrophic challenge, thanks to the emergence of majors as shale players. As the IEA analysis notes:

“Rising interest rates often coincide with tighter lending conditions, which may make it harder for companies to service their debts and refinance their operations. But this risk can be managed through asset sales to less-capital-constrained companies, such as the majors, and increased reliance on equity raising through IPOs and private equity.”

As Bordoff tweeted, McLean’s analysis lacks focus on the current industry realities with regard to interest rates as well,

To McLean’s credit, she admits in a recent tweet that the claims made in her op-ed could turn out to be “dead wrong,”

We couldn’t agree with McLean more on this one. After all, virtually every other “shale bubble” narrative that’s come before has proven to be dead wrong. Here are just a few examples.

• “… the glory days of U.S. tight oil are in the past. The high-water mark of production in early 2015 is unlikely to be surpassed by much, or for long, before terminal decline sets in.” — Richard Heinberg, Post Carbon Institute, January 2017

• “[I] am putting my reputation on the line in making the claim that the period, September 2014 through August 2015 will be the year of Peak Oil.” Ron Patterson, February 2015.

• “A decline in US shale gas production would occur when wells are shut in as various companies edge toward filing for Chapter 11. This could occur as early as January 2011.” — Ruud Weijermars, 2010

• … there is a strong “basis for reasonable doubts about the reliability and durability of US shale gas reserves.” — Ruud Weijermars, 2013

• “Production rates are already in decline in many shale plays. The high rates of per-well investment required to maintain production mean U.S. shale gas production may have already peaked and maintaining production will require high rates of potentially unsustainable, high-cost drilling.” — Earthworks, May 2013

• “I think the Marcellus is getting pretty close to the peak in [total] production.” — David Hughes, Post Carbon Institute, February 2014.

It is clear that even before it’s been released, McLean’s book is as outdated and irrelevant as the “shale bubble” narrative it will aim to advance. Not only is U.S. oil and natural gas production soaring to record-obliterating heights this year thanks to shale development, the best is yet to come, as the still emerging industry has entered a new era of stability that McLean and other shale naysayers choose to ignore.