Prior to being retracted last month due to what researchers called “honest calculation errors,” a 2015 University of Cincinnati study on the effects of shale development in Carroll County, Ohio, suggested “natural gas extraction may be contributing significantly to PAH (polycyclic aromatic hydrocarbon emissions) in the air, at levels that are relevant to human health.”

That assessment led to alarmist headlines, such as Newsweek’s “Fracking Could Increase Risk of Cancer, New Study Finds,” But it turns out that the corrected version, posted this week, has reached the exact opposite conclusion:

“This work suggests that natural gas extraction is contributing PAHs to the air, at levels that would not be expected to increase cancer risk.”

In fact, the researchers’ “honest calculation errors” in the original study led to an exaggeration in the cancer risk from PAH emissions in Carroll County by an astounding 7,250 times what the corrected study shows they actually are. The following graphics from the original and corrected study pretty much tell the tale.

Original graph from the original study 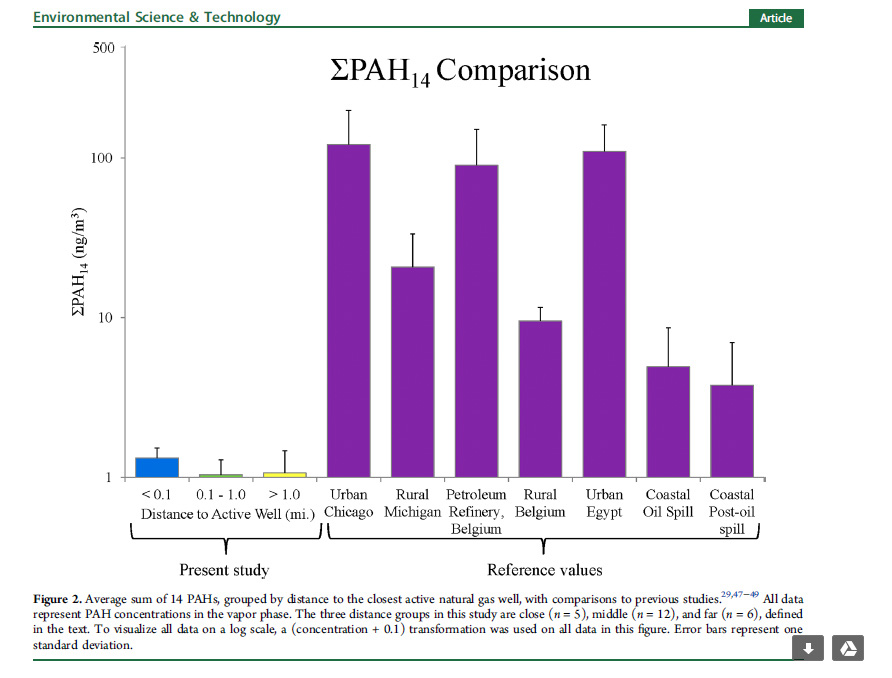 Corrected graph from the updated study

The first graphic illustrates the original study. The blue, green and yellow bars on the left of the graph indicate emissions at the well sites (close, middle distance and far away from natural gas wells) while the purple bars on the right are supposed to indicate emission levels detected in similar studies conducted in urban areas such as Chicago, as well as a refinery in Belgium and a pair of oil spill sites. The original study showed PAH levels in Carroll County at 330, 240, and 210 ng/m3, respectively, for each the three study groups, which were much higher than levels in urban areas and refineries.

But the second graphic, which is the corrected graphic, shows that PAH levels were actually 1.2, 0.94, and 0.97 ng/m3 in each of the study groups. These readings are far below all the comparable studies it cited and more than 20,000 percent lower than what the original study reported.

Most notably, the corrected study shows that PAH emission levels are well below the level the U.S. Environmental Protection Agency (EPA) says would increase risk of cancer — the complete opposite of what the original study claimed. Amazingly, the original study exaggerated the cancer risk 725,000 percent what it actually is, based on the researchers’ revised data.

Let’s take a look at the most notable data corrections from the retracted study to the corrected study, with the first three examples concerning cancer risk.

Original Study Claim: “Closest to active wells, the (cancer) risk estimated for maximum residential exposure was 2.9 in 10,000, which is above EPA’s acceptable risk level.”

Corrected Study: “At sites closest to active wells, the risk estimated for maximum residential exposure was 0.04 in a million, which is below the U.S. Environmental Protection Agency’ s acceptable risk level.”

Original Study Claim: “This suggests that the maximum exposure scenario would produce risk levels above the U.S. EPA’s acceptable range. Thus, PAH mixtures in areas heavily impacted by NGE may have higher than acceptable cancer risk increases as exposure moves closer to an active NGE well.”

Corrected Study: “None of the estimated ELCRs (excess lifetime cancer risk) were above one in a million, which is the conservative end of the range that the U.S. EPA considers acceptable. Thus, NGE in this study did not appear to emit PAH levels into air that would elevate carcinogenic risk associated with inhalation.”

Essentially, the revised study completely contradicts a claim by study co-author Kim Anderson of Oregon State University, who was quoted in a press release accompanying the original study saying: “Air pollution from fracking operations may pose an under-recognized health hazard to people living near them.”

The original study also trumpets that two PAHs in particularly — benzopyrene and phenanthrene — are primary concerns for cancer. Interestingly, in the original study phenanthrene was identified as the most prominent PAH detected. However, the corrected study identifies naphthalene as the most prominent PAH detected, while benzopyrene wasn’t even mentioned as being prominently detected.

Here’s a look at the differences between the two studies in regard to phenanthrene and benzopyrene and all PAH detection in general:

Original Study Claim: “Average phenanthrene levels were 130, 96 and 88 ng/m3 for the close, middle and far groups.”

Original Study Claim: “Average benzo [a] pyrene levels were 2.8, 2.7 and 1.9 ng/m3 for the close, middle and far groups…. Average BaPeq (Benzo[a]pyrene equivalent) concentrations in all distance groups would be potentially concerning in chronic doses.”

Though the authors’ acknowledgement of their errors and relatively prompt publication of the corrected study is commendable — especially when compared to how UC’s still yet-to-be-published study showing no groundwater contamination from fracking has been handled — it is still becoming more and more difficult to give UC the benefit of the doubt.

Combined with the many flaws of the study EID has already pointed out – the fact that the authors admit their sample size (25 samples) was too small, that fact that they conceded that the chief assumption used for their research model was “totally impractical,” the fact that study participants were recruited by an anti-fracking activist group, and the fact that worst case scenarios were assumed in their cancer hazard assessments, just to name a few — the sheer degree to which the research team botched the original data borders on shocking, especially considering scientists would seemingly be capable of catching such egregious mathematical errors.

But maybe it shouldn’t come as a big a surprise, considering lead author Erin Haynes not only presented the study’s original findings at a meeting of an anti-fracking group, and the researchers specifically thank that group’s leader in the corrected study.

“This work was funded by grants from the National Institute of Environmental Health Sciences to Oregon State University (P30-ES000210) and the University of Cincinnati (P30-ES06096). We thank Glenn Wilson, Ricky Scott, Jorge Padilla, Gary Points, and Melissa McCartney of the OSU FSES Program for help with analysis. Thank you to Dr. Diana Rohlman of the OSU Environmental Health Sciences Center Community Outreach and Engagement Core (COEC), Sarah Elam of the University of Cincinnati (UC) Environmental Health Sciences Center COEC, Jody Alden of UC, and Paul Feezel of Carroll Concerned Citizens, all for assistance with volunteer recruitment and communication. Thank you to Pierce Kuhnell of UC for mapping sample sites. Finally, thank you to the volunteer participants in Ohio for making this study possible.”

Considering the study was taxpayer funded, it seems more explanation may be in order as to why the original version was so off the mark.