Could the Appalachian Basin Be the Next Silicon Valley of American Energy Infrastructure?

West Virginia University (WVU) has just released its second geologic study relating to the Appalachian Basin. This latest study addresses the feasibility of storing natural gas liquids (NGLs) in states along the Ohio River based on the region’s geology. In short, the study finds Ohio and West Virginia are prime spots for storage, and if such infrastructure is developed, it could provide significant economic benefits in the Appalachian Basin.

This latest WVU report, when coupled with WVU’s 2015 study that found the Utica Shale formation has much more recoverable oil and natural gas than previously thought, could also be foreshadowing an entirely new phase of oil and gas development in Appalachia’s future. It should be noted that neither study takes into account some variable economic realities such as commodity prices, taxation, regulatory issues related to exploration and production, or NGLs storage. However, both studies do provide a clearer picture of a scenario previously unimagined in the region: Could the Appalachian Basin be the next Silicon Valley of American energy infrastructure?

In 2015, WVU foreshadowed that the Utica Shale could be “comparable” to the Marcellus. According to the study, the Utica has an astounding 782 trillion cubic feet (Tcf) of technically recoverable natural gas – more than 20 times the 38 Tcf previously discovered in a 2012 United States Geological Survey (USGS) assessment.

In addition, the study predicted that many newly-found drilling locations will produce hydrocarbons more efficiently than in some previous areas, writing that,

“As the play develops, one can expect an increase in productivity as the best areas are discovered.” (p. 165)

It also indicated that the vast Point Pleasant Formation of Ohio has exceptionally high recoverability potential compared to other areas of the Utica, due to its unique chemical composition:

And, while it’s only been two years since the study was released, it appears WVU is on the right track with its geological assessment of Utica Shale exploration potential.

During the project’s research period (2012-2013) Utica Shale drilling was at its peak. Then, drilling practically came to a screeching halt due to low commodity prices. However, even with a significant reduction in drilling over the past two years, Utica Shale production has continued to surge, as is evident by Ohio’s recent second quarter production results, which show Utica Shale natural gas production rose by 16 percent compared to second quarter 2016 production. Utica production also increased by four percent this past quarter when compared to the first quarter of 2017, for a total of 388,560,451 billion cubic feet (Bcf). 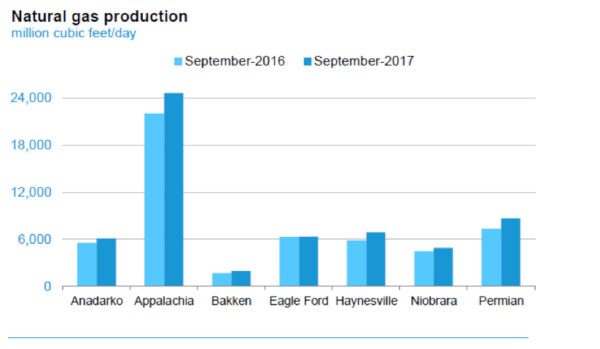 Also noteworthy is the fact that the industry had pumped $22 billion into Ohio’s economy alone back when the 2015 WVU study was released. Fast forward to 2017 and that number has more than doubled in just two years, swelling to over $50.4 billion, according to Cleveland State University. In other words, WVU’s first geological study and foreshadowing of things to come has in fact started to become an economic reality.

Let’s take a look at the key findings in WVU’s latest study:

#1: First and foremost, underground NGLs storage in the Appalachian Basin is not new, and the geology confirms the region can readily support more of it.

While the history of underground NGLs storage is not directly covered in WVU’s report, the first successful project was completed in 1915 in Ontario, Canada, with the United States developing its own the following year in Buffalo, N.Y. Today, the U.S. has more underground gas storage projects than any other country.

The region itself is ideal for this type of storage of NGLs. Two important characteristics of an underground storage reservoir are its capacity to hold NGLs for future use and the rate at which gas inventory can be withdrawn – known in industry parlance as its deliverability rate. As of 2015, nine percent of the gas storage facilities in the United States were in mined salt caverns; this number does not include mined hard-rock caverns that store liquid petroleum natural gases (LPGs), five of which are in Ohio.

The latest WVU geology study found that there are a lot more opportunities that exist to develop additional underground natural storage facilities and infrastructure,

The goal of the Appalachian Storage Hub is to store and deliver 110 million barrels of NGLs. 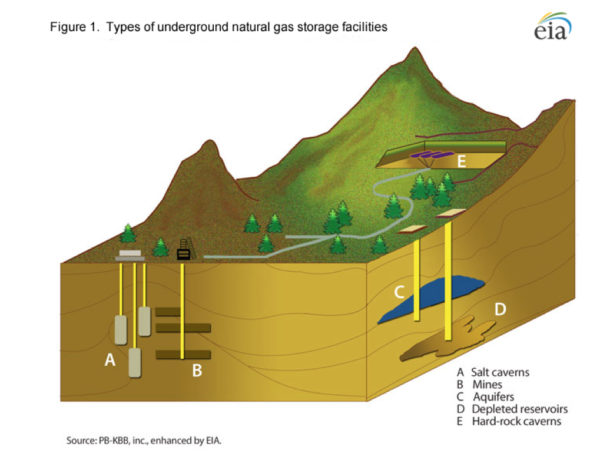 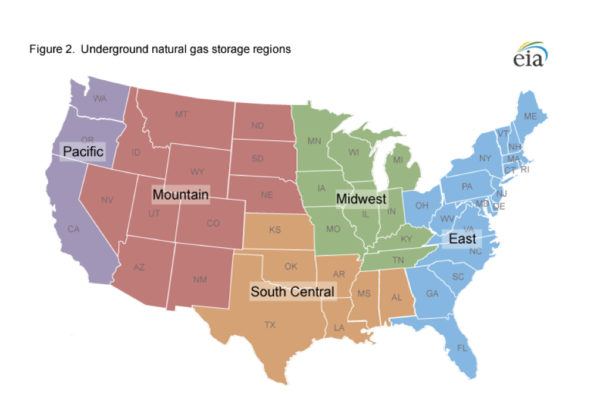 The 181-page study was conducted to help foster the use of local NGLs found in the Marcellus and Utica shales. The study specifically highlights the geological rationale for underground NGLs storage, which are essentially warehouses that allow consumers, such as ethane cracker plants, to have a steady supply of natural gas year-round and without interruption.

The liquids-rich Appalachian Basin has essentially been a drain on producers, as a local home for the end use of NGLs such as ethane has not previously existed. Massive petrochemical projects like the Shell ethane cracker in Pennsylvania and the proposed PTT Global Chemical ethane cracker project in Ohio will change that dynamic, and by doing so, the need for NGLs storage will become critical.

The WVU study explains the need to keep NGLs local this way,

“Because of the amount of natural gas liquids (NGLs) contained in this production, development of these shale plays has the potential to have a large impact on the petrochemical industry. In the United States, petrochemical projects are expanding. Industry investment and jobs have increased; the value of NGLs has increased; and fractionation capacity has increased as new processing plants come on line. The great, untapped resource from the Marcellus and Utica play areas is ethane. Due to the lack of a local market providing a higher value alternative, most of the ethane from the Marcellus and Utica is rejected, that is, left in the gas stream for sale. For the ethane that is recovered, it is all leaving the area and going to Canada, Texas, Louisiana and export markets in Europe to support the petrochemical industry in those locations.”

The American Chemistry Council (ACC) recently released a study which speaks more specifically to the issue of the need for storage, as explained by Cal Dooley, President of ACC,

The Appalachian Basin also happens to be in the heart of historic areas of manufacturing. For example, according to the West Virginia Department of Commerce, 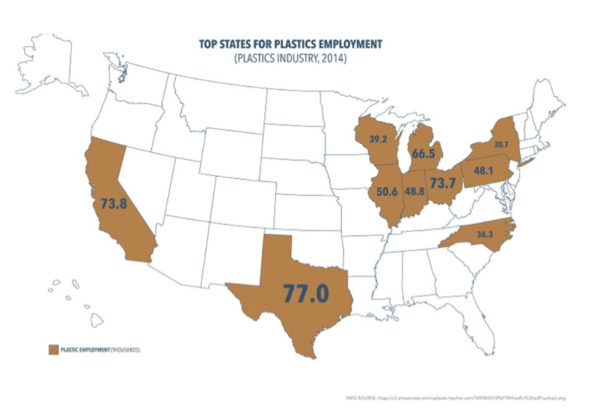 And all of this manufacturing relies on NGLs found in locally produced shale. The WVU study suggests that a robust regional hub would support a regional energy infrastructure nerve center, utilizing pipelines, underground NGLs storage in salt-depleted gas reservoirs, and NGLs storage fields which would all ultimately be used by cracker plants that provide the feedstock to support manufacturing. 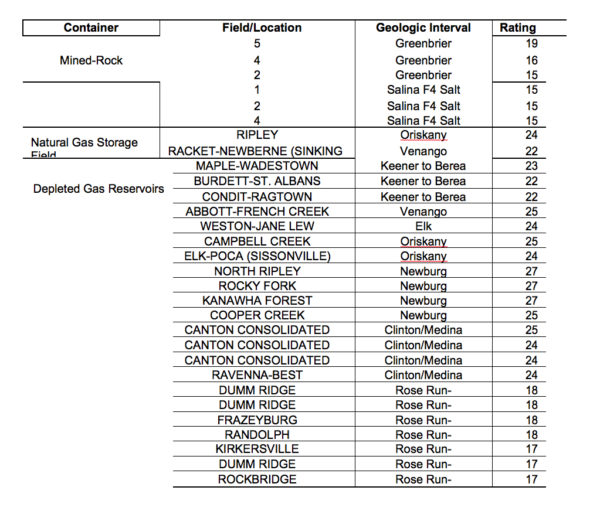 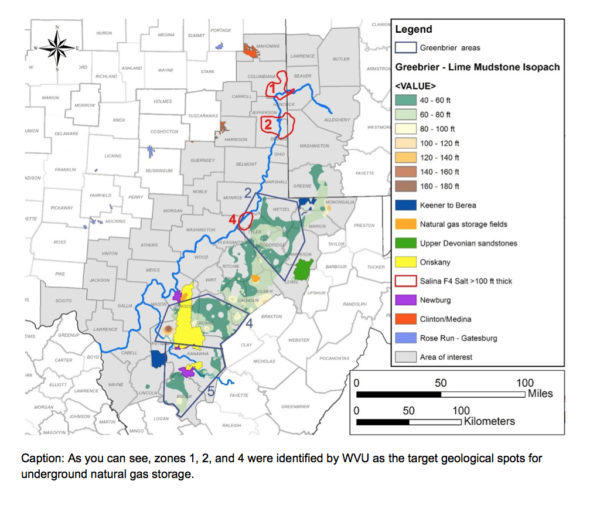 #3: A hub will mean many forms of storage and infrastructure across the region, not a single facility

While some may assume a hub means a giant facility that stores NGLs, the Appalachian Storage Hub, as defined by the WVU study, is in fact a combination of several storage facilities utilizing various methods of storage options from mined-rock caverns, to depleted gas reservoirs, and especially underground salt domes. These storage centers would connect to various proposed ethane cracker plants via a series of pipelines. In that regard, the hub would include practically the entire Appalachian region from Pennsylvania, West Virginia, Ohio and even down to Kentucky.

In other words, the hub is not one location or one facility, it’s more similar to the term “Silicon Valley,” which is a figure of speech used to describe America’s high-tech economic sector. Today, Silicon Valley employs about a quarter of a million IT workers, thanks to a network of companies and locations in close proximity to each other regionally.

Similarly, the WVU study shows that underground NGLs storage could easily support a regional Appalachian Storage Hub which would span along the Ohio River across sections of Pennsylvania, Ohio, West Virginia and Kentucky.

With the Shell ethane cracker plant in Pennsylvania well underway and news of a final decision by PTT Global Chemical to construct another ethane cracker in Ohio, it should not be surprising that the private sector has already determined the need for underground NGLs storage.

More than $20 million has already been spent toward a major NGLs storage project in Clarington, Ohio, with room for expansion to the north, south, and across the river in West Virginia, which will be called the Mountaineer NGL Storage facility. This facility was featured in the WVU study as a key geologic site for development, and the president of that facility, David Hooker, said,

“This is a strong project that will satisfy the growing demand for reliable storage services to the many pipelines, rail, truck, and barge infrastructure currently being built to transport Marcellus and Utica natural gas liquids throughout the Northeast and Mid-Atlantic. We are eager to move into the construction phase and fulfill this critical need for storage.”

Hooker hopes to have the project, which includes three pipelines to a new NGLs storage facility, up and running by 2019. Mountaineer NGLs will be located in the Salina F4 Salt formation. The salt caverns will be capable of holding 500,000 barrels of ethane, butane or propane every six to eight months once in operation. This project will be the first active Appalachian Storage Hub facility.

In addition to the investment money already being spent in the region, the ACC study found that the creation of NGLs storage infrastructure in the region could yield up to 100,000 permanent new jobs, and up to $2.9 billion in new federal, state and local tax revenue annually. U.S. Senator Joe Manchin (D-W.Va.) has described  the hub this way,

“This is a game-changer for us. It’s a real field of dreams.”

When exploration and production companies bet early on the success of the Utica, experts immediately studied their efforts and echoed those companies’ belief of the Utica’s tremendous potential. That potential has turned into a very real shale renaissance, and it appears that the same scenario may be happening now with the Appalachian Hub.

Will the Appalachian Storage Hub become a Silicon Valley of shale, creating an energy infrastructure nerve center capable of catapulting a manufacturing renaissance that will thrive with locally produced Marcellus and Utica Shale resources? Time will tell. What we do know is that this latest WVU study is eerily similar to it last, and if history does in fact repeat itself and, as Sen. Manchin said, this hub could very well be a “field of dreams.”