Oil and natural gas production in the Permian Basin could undergo a massive shift from New Mexico to Texas, according to a new report from the Federal Reserve Bank of Dallas, because of the Biden administration’s executive orders on leasing and permitting on federal lands.

Analyzing the potential effects of the administration’s policy, economists at the Dallas Fed anticipate production in the Permian could drastically decrease as half of New Mexico’s development takes place on federal lands.

Economists Garrett Golding and Kunal Patel state the Permian will produce thousands of barrels less per day and that production will shift to private lands, mostly in Texas:

“[W]e estimate that by the end of 2025, the Permian will produce between 230,000 and 490,000 barrels per day less than if drilling activity continued at its current pace. As a result, production and employment across the basin will gradually shift from federal lands in New Mexico to private and state lands in New Mexico and Texas, with wide-ranging economic implications for the region.”

Due to New Mexico’s significant share of oil and natural gas leases on federal lands, the state could see its output decline dramatically and a huge portion of the labor force move to Texas. 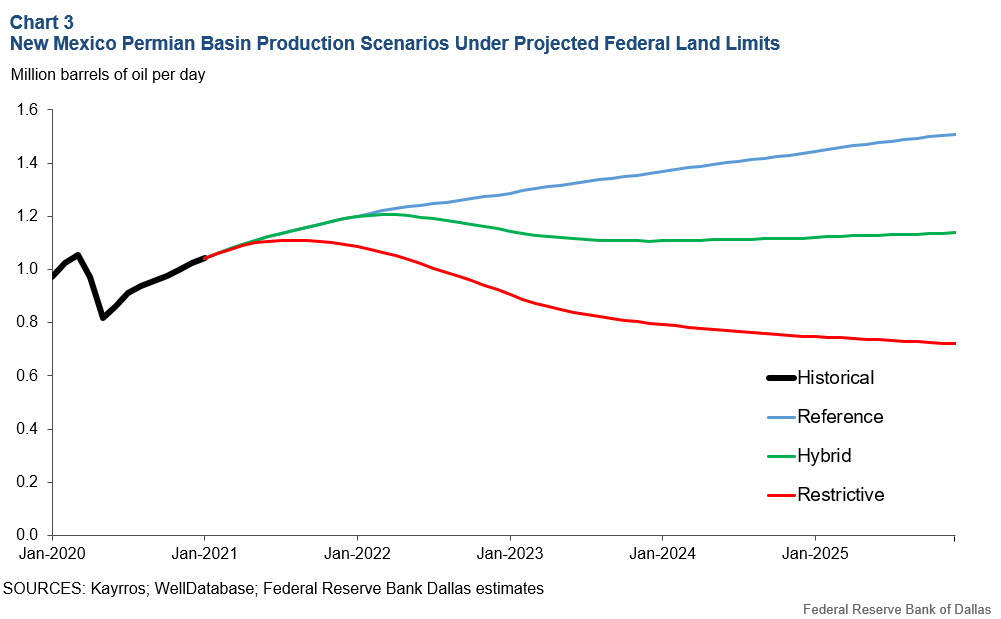 In between the restrictive and hybrid scenarios, both of which assume no new federal permits are issued or that permitting is significantly delayed, an estimated 3,500 to 6,600 workers in New Mexico could be out of work. In stark contrast, Texas would require 5,400 to 7,400 more jobs to meet increased demand, impacting New Mexico’s labor market drastically.

The Dallas Fed’s report reveals just how much is at stake for New Mexico. More than a third of the state’s general fund revenue in 2019, which funds critical state services like education, came from oil and natural gas production. As the Dallas Fed notes,

“A total of $809 million came from the state’s share of minerals revenue on federal properties.”

The sector faces another threat if the New Mexico state legislature moves forward with a ban on new fracking permits on state lands. If that proposal becomes law, it will put once well-funded critical services in jeopardy:  New Mexico’s Legislative Finance Committee (LFC) projects that if Senate Bill 149 were to pass the state would lose $11 billion over a four year period.

As lawmakers deal with the effects of these harmful bans, and with no clear support for displaced workers or how to replace lost revenue, it’s New Mexico’s labor force and public services that will bear the brunt of the consequences of these policies.