Data Show Texas Ozone Levels Are Not Driven by Fracking 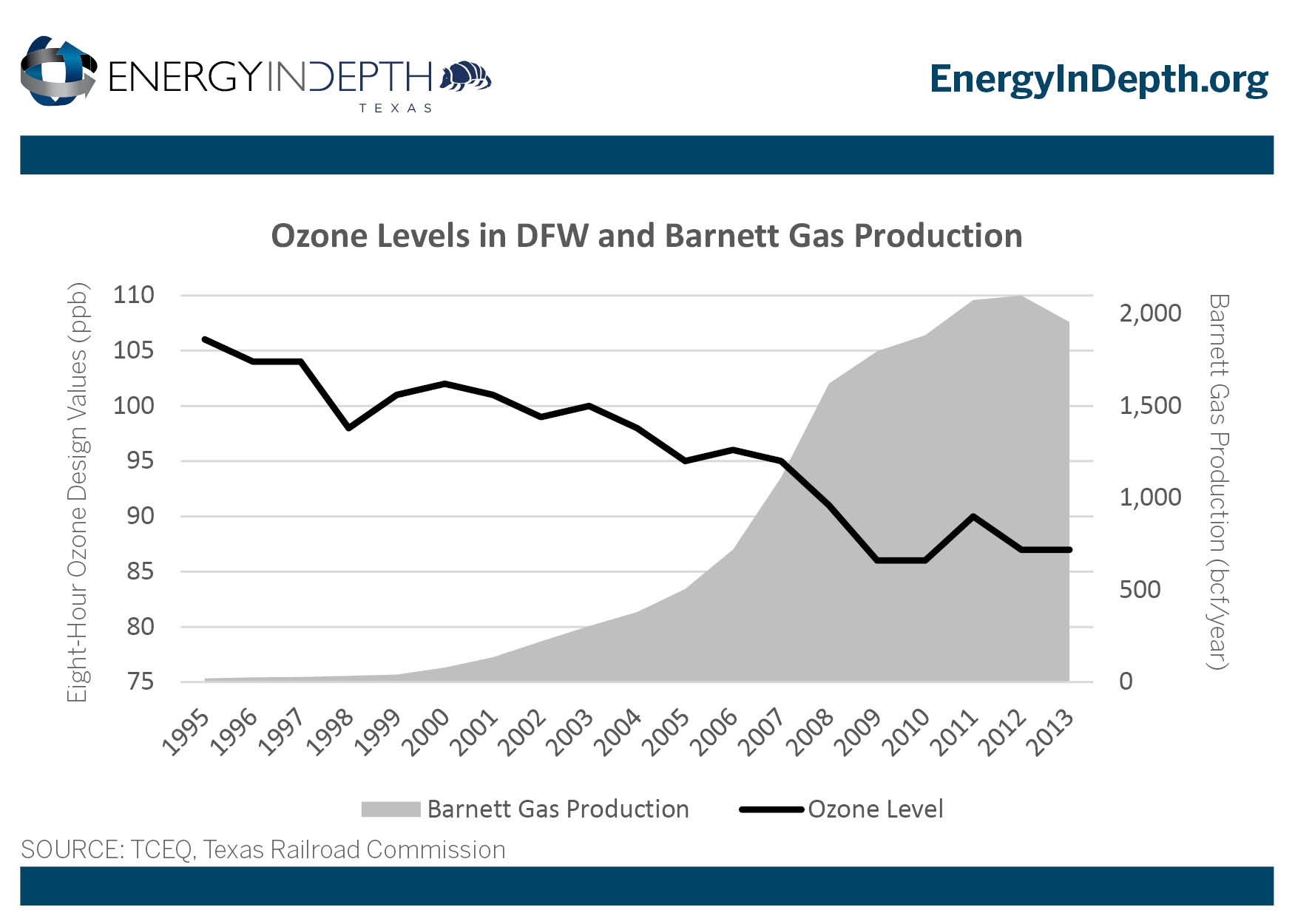 The rapidly-growing Dallas-Fort Worth (DFW) metropolitan area in North Texas has struggled for years to reach attainment with federal clean air requirements for ozone, a problem that many environmental activists have blamed on hydraulic fracturing (“fracking”). But a closer review of publicly available data suggests there is no credible link between ozone nonattainment and development of the Barnett Shale, over which much of the Metroplex sits.

Ground-level ozone, also known as smog, is formed when volatile organic compounds (VOCs) and nitrogen oxides (NOx) interact with sunlight. An array of industrial activities emit NOx and VOCs, although many regulators have identified tailpipe emissions from cars and trucks as the main cause of smog.

Critics of fracking have alleged for years that oil and natural gas activities emit more ozone precursors than all of the cars and trucks on the road in DFW. Downwinders at Risk, a local environmental group, told Fort Worth Weekly in 2011 that “the gas industry now emits more smog-forming volatile organic compounds, or VOCs, than all the cars and trucks in D/FW combined.” As part of its “Don’t Frack with NY” advocacy campaign, the environmental group Riverkeeper wrote in 2012 that Barnett Shale activities “emit more smog-causing volatile organic compounds (VOCs) than all cars, trucks, buses, and other mobile sources in the area combined.” The claim was also reprinted in the New York Times in 2011 with little scrutiny.

The talking point traces its origin to a 2009 study authored by Al Armendariz, then a professor at Southern Methodist University, who hypothesized that “the oil and gas sector likely has greater [smog-forming] emissions than motor vehicles” in the five Metroplex counties with “significant oil and gas production.” Armendariz later became the head of EPA’s Region 6 office in Dallas, although he was forced to resign after a video surfaced of him explaining his strategy to use his EPA authority to “crucify” the energy industry. He now works for the anti-drilling Sierra Club.

Nonetheless, data from the Texas Commission on Environmental Quality (TCEQ) – which operates the most comprehensive air monitoring network in the area – show that vehicular emissions actually far exceed those emanating from Barnett Shale activities.

Shortly after the Armendariz study was released, TCEQ reviewed its findings, concluding that they were “based on incomparable data and exaggerate the relative significance of the emissions from the Barnett Shale with regard to ozone formation in the Dallas-Fort Worth (DFW) ozone nonattainment area.” TCEQ added that the study “over-simplifies the chemistry that underlies ozone formation in the DFW area,” because it ascribed equal weight to NOx and VOCs in the formation of smog. As TCEQ observed, “the response to NOx reductions is much stronger than the response to VOC emissions,” and “for NOx emissions, on-road mobile sources are the largest single category.” 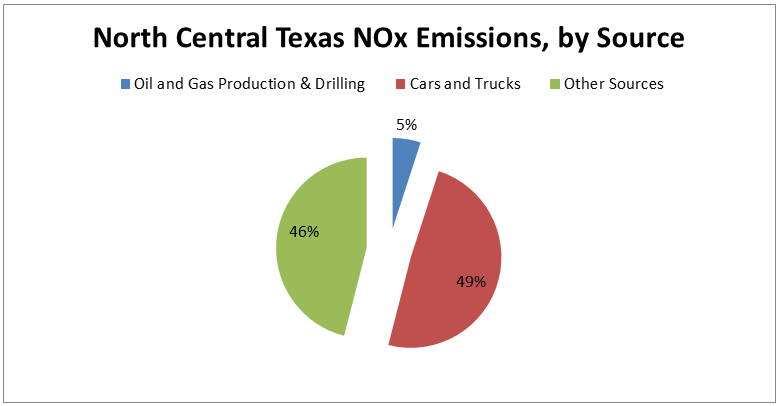 SOURCE: TCEQ and the North Central Texas Council of Governments, 2012 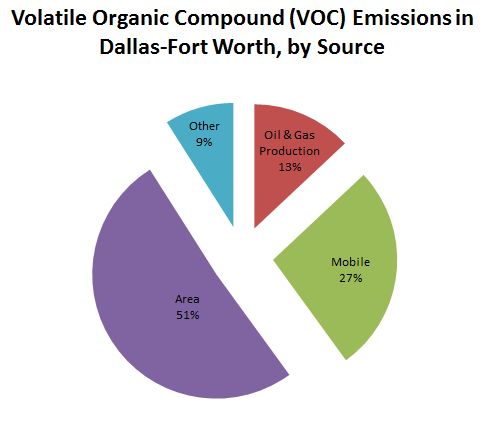 In short, the paper’s conclusion that “the oil and gas sector likely has greater emissions than motor vehicles” was not only incorrect, but also rested on false assumptions about how ozone actually forms. That may also explain how ozone in the Dallas-Fort Worth region could decline as Barnett Shale production grew.

Critics have similarly linked ozone levels in San Antonio to the booming Eagle Ford Shale, located about 50 miles south of the city. Like the Metroplex, San Antonio has experienced rapid growth in recent years. In just a two year span, from 2010 to 2012, more than 90,000 people moved to the south Texas metropolis, helping to make it the fourth-fastest growing major city nationwide. Experts say the rapid growth means the physical size of San Antonio could double by 2040.

Increased population means additional cars and trucks on the road, along with other economic development to support new jobs. These activities all contribute to ozone formation, but environmentalists and other activist groups have focused blame on emissions from the Eagle Ford, where daily oil production has grown by over 6,000 percent since just 2010, according to data from the Texas Railroad Commission.

For example, Downwinders at Risk wrote last year that San Antonio’s public officials “deny the link between the Eagle Ford and smog in their city.”  InsideClimate News has claimed that ozone levels “began rising in 2007, with the steepest increase seen around 2011, just as the Eagle Ford boom exploded.” ICN also alleges that the Eagle Ford is an “important factor” in the region’s ozone (notably, the natural resources director for the Alamo Area Council of Governments said ICN’s claim was based on preliminary data that are “really not worth using”). In 2013, a report by Earthworks — which recently pledged a “war on fracking” —  alleged that oil and natural gas companies operating in the Eagle Ford “are allowed to release hundreds of tons of air pollutants on an annual basis,” including ozone precursors such as VOCs and NOx. A representative from the Environmental Defense Fund told the Texas Tribune: “We know that emissions from oil and gas drilling operations are contributing to increases in ozone concentrations,” including in San Antonio.

But the most comprehensive data set on regional emissions suggests that environmental groups are overstating the degree to which Eagle Ford operations contribute to San Antonio’s ozone problem. 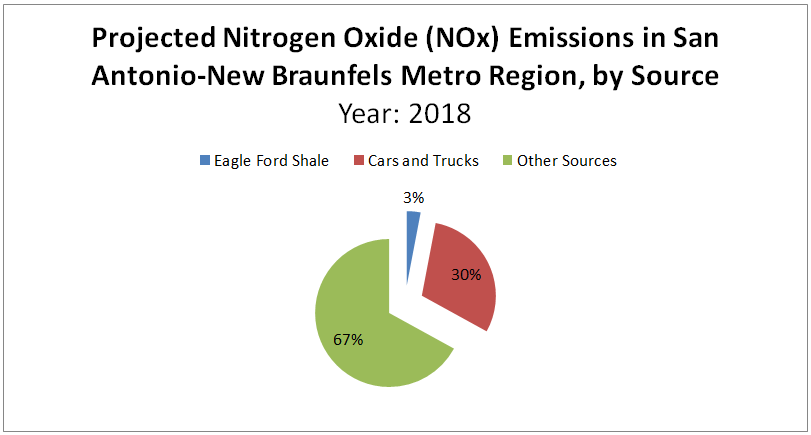 According to a report from the Alamo Area Council of Governments (AACOG), VOC emissions from cars and trucks in the San Antonio-New Braunfels metropolitan area were more than ten times what emanated from Eagle Ford activities in 2012. That same year, automobiles emitted approximately 20 times more NOx than Eagle Ford operations. By 2018, emissions from automobiles are projected to decline significantly, but VOCs and NOx from the Eagle Ford will only account for about three percent of the region’s total emissions. 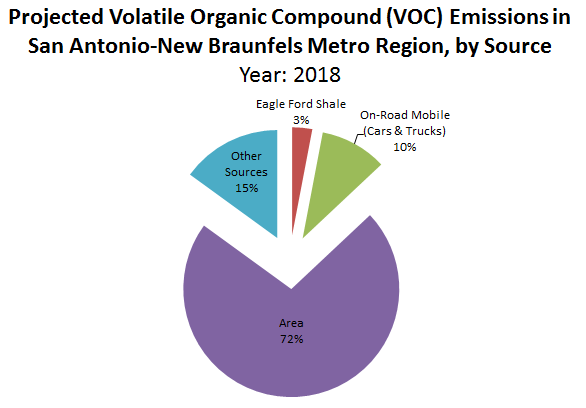 As the San Antonio Express-News reported in 2013, drilling-related emissions are largely in rural counties, and “the total air pollution produced in Bexar County alone could easily match” what’s emitted from the Eagle Ford, according to AACOG.

Last week, the U.S. Environmental Protection Agency held two public hearings on its proposal to reduce the National Ambient Air Quality Standard (NAAQS) for ozone from 75 parts per billion (ppb) to between 65 and 70 ppb. Environmental groups flooded the hearings with individuals calling for a stricter standard — 60 ppb — than what even the EPA claims would be cost-effective. An Energy In Depth analysis found that EPA inflated the net benefits of its proposed ozone rule by as much as 3,100 percent over what the Agency had determined for the same standard just three years earlier.

Based upon the data, however, the environmentalists’ claim that “fracking” is pushing major Texas cities into nonattainment is without merit.