The Maryland General Assembly passed a bill on Monday evening authorizing a statewide ban on hydraulic fracturing, or fracking. The bill, which was passed in the House of Representatives earlier this month and passed the Senate by a 35-10 vote Monday night, now moves to Gov. Larry Hogan’s desk, where it will inevitably be signed into law given his recent statements that he now supports a ban. Hogan, who communicated support for fracking on the campaign trail, cited the fact that his administration’s proposed regulations had not been enacted as a chief reason for the reversal. This is a seemingly disingenuous claim, considering the fact that his administration’s website indicates regulations Hogan said would have ensured fracking “could be done in a clean, environmentally safe way” would have gone into effect later this year:

If you’re getting a sense of déjà vu, it’s probably because Maryland’ decision is eerily similar to what happened in New York, the only other state with recoverable shale oil and gas that has banned fracking. Both catered to activists in urban centers while disregarding rural populations that welcomed the process on their properties, all-the-while offering no other solutions to increase jobs and revenue in those communities. And both states did it under the guise of “science,” when each instance was actually highly motivated by politics.

But perhaps the most ironic — and hypocritical— similarity is that Maryland will now join New York in banning development, while having an energy plan that calls for more natural gas consumption beyond the already significant increases in natural gas use of recent years.

The Energy Information Administration’s (EIA) most recent available data show that the state already consumes a large quantity of natural gas each year: 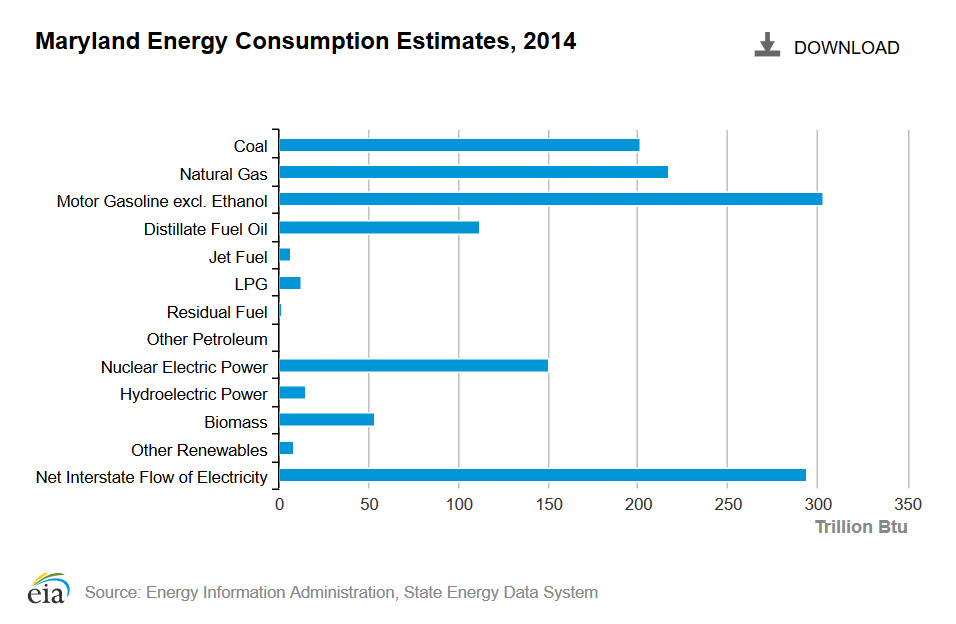 As the American Petroleum Institute (API) noted in a press release Monday night, “Since 2006, natural gas use in Maryland has increased by nearly 18 percent as the price of natural gas for residential consumers fell 26 percent.”

And natural gas’ share of Maryland’s energy mix is about to increase even more significantly in the years to come for the following reason.

Although nearly half of Marylanders rely on natural gas for heating their homes, EIA data show nuclear and coal currently reign supreme in Maryland, making up about 80 percent of the state’s electricity generation combined. 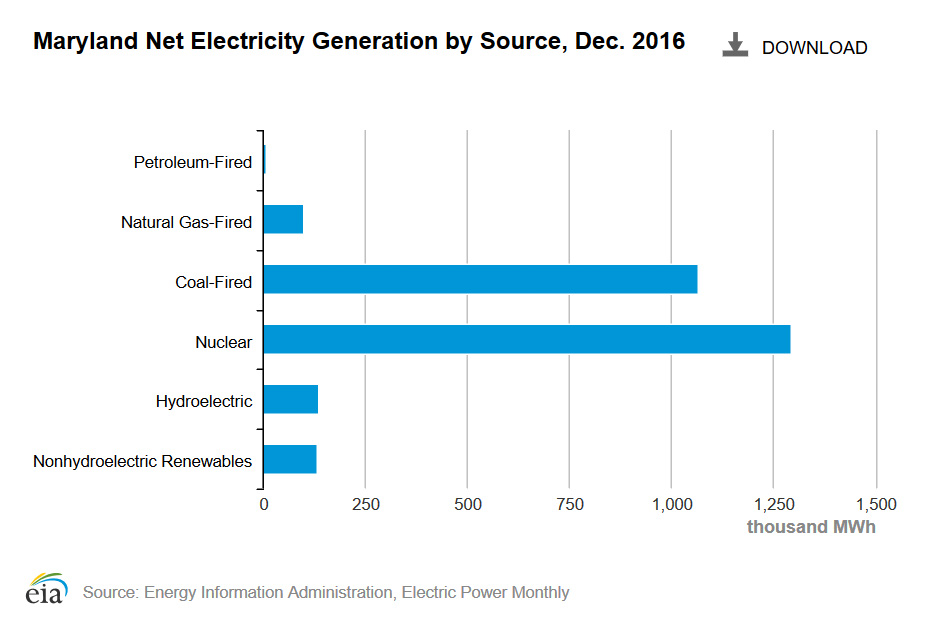 However, the process has already begun for natural gas to begin to replace nuclear and coal as electricity-generation sources. That’s because as the Public Service Commission of Maryland’s (PSC) November 2016 annual 10-Year Plan (2016-2025) of Electric Companies notes,

“Nearly 70% of Maryland’s coal-fired electric generation is produced by power plants that are at least 30 years old. Of these plants, 22% have been operating for more than 50 years, representing about 12% of the state’s total generation. These plants are so old that when they were built, JFK was president and The Beatles had just played their first show.” (emphasis added)

As the Maryland Online Manual explains,

That’s a significant portion of the state’s electricity. The two reactors at Calvert Cliffs have been operational since 1975 and 1977, and received a 20-year extension of their license in 2000. The initial life expectance for nuclear plants was 40 years — these reactors are at 40 and 42 years — with initiatives in 2015 to expand the licensing, which would bring the U.S. fleet to a lifespan of 80 years.

The Institute for Energy and the Environment at Vermont Law School explained in its 2013 report that, like many nuclear facilities across the country, Calvert Cliffs may be forced into early retirement due to rising costs. A spokeswoman for the then-owner of the plant told the Maryland Reporter following the report’s release that there were no plans for early retirement at that time; however, in 2015 the current owners formally withdrew plans for a third reactor to be built.

And while all of this uncertainty with aging facilities is occurring, the state is moving ahead with plans for more natural gas-fired power, as PSC reports:

“The construction of new generation, both conventional and renewable, is a way to address the in-State capacity and electricity import issues discussed in previous sections.  As illustrated in Table 14 below, all of the new conventional generation proposed in Maryland during the 2016–2025 planning period is natural gas fired.  There is no proposed new coal, oil, or nuclear generation in the State during the planning period. There are four projects from two different transmission owners planned, with projected in-service dates ranging between 2017 and 2018. The four facilities, represented in the chart below and totaling 3,355 MW, are currently under construction.” (page 35, emphasis added)

Considering EIA estimates about 40 percent of Marylanders use electricity to heat their homes, that too will soon be coming in large part from natural gas, as more natural gas plants come online.

Maryland natural gas production is currently next to nothing, and that’s not going to improve with a ban on fracking, so where is all this energy going to come from?

Maryland does have a long history of natural gas development; however, according to the EIA,

Thankfully, Pennsylvania a net exporter of the resource, allowing it to sell what’s being developed in the Marcellus to states like Maryland and New York, transported via pipelines. The proposed Atlantic Sunrise pipeline, when built, will also add to the available pipeline network in order to help meet the energy needs of Maryland’s residents. And all of that gas coming out of Pennsylvania is produced from  – drumroll please — fracking.

With more than 90 percent of all oil and gas wells being fracked in the United States, one would actually be hard-pressed to find any gas entering the state that wasn’t developed using fracking.

Maryland is also a net importer of electricity

But there’s yet another element to the need for import: Maryland is already a net importer of electricity because it’s current power generation facilities are not large enough to meet the state’s high demands.

According to PSC, Maryland is the third largest importer of electricity nationwide, behind only the District of Columbia and Massachusetts, with about 44 percent of its electricity imported in 2014. By contrast, two of Maryland’s neighbors, Pennsylvania and West Virginia, are net-exporters of electricity, thanks in large part to the Marcellus Shale reserves being developed in those states.

Maryland imports its electricity from the PJM Interconnection, which is a multi-state wholesale retailer of electricity. PJM’s most recent annual report from 2015 said that,

And as a 2016 PJM PowerPoint presentation showed, not only is natural gas already making up a large portion of the electricity being sent to places like Maryland, but the “use of natural gas for electric generation will continue to grow and supplant retiring coal fired units.” 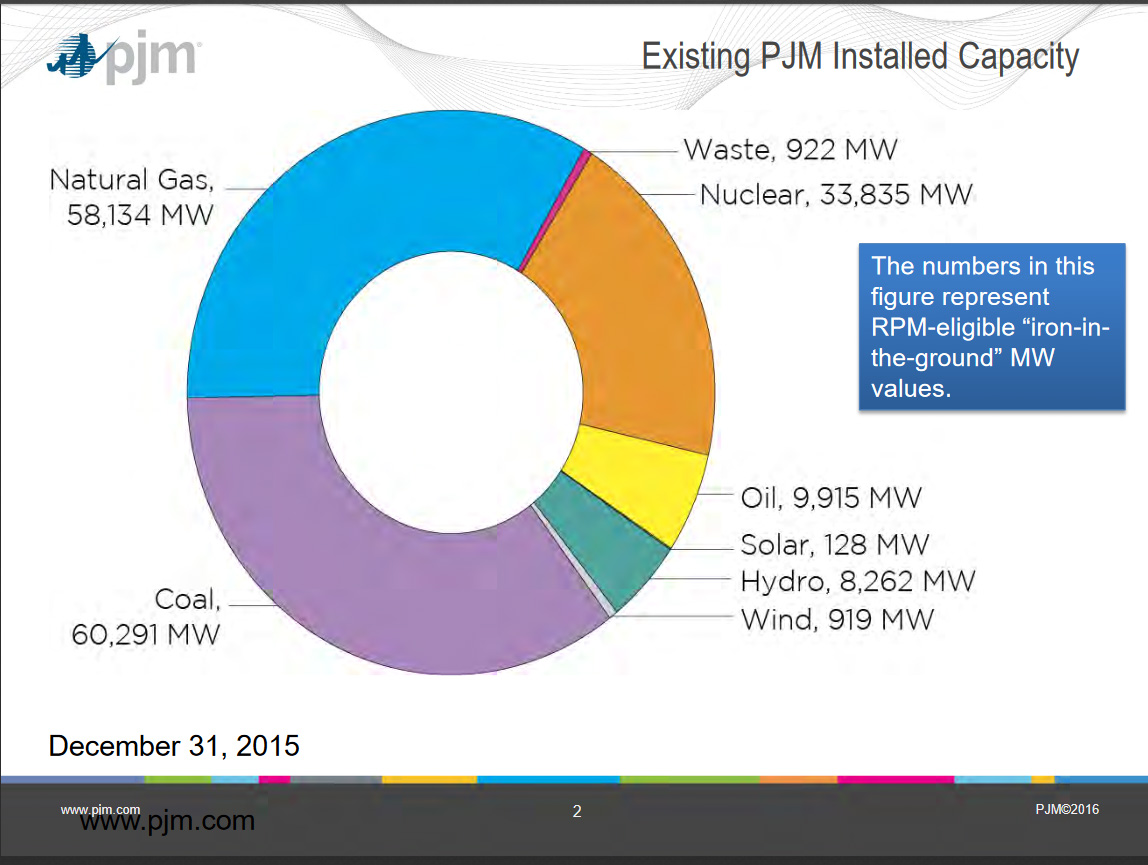 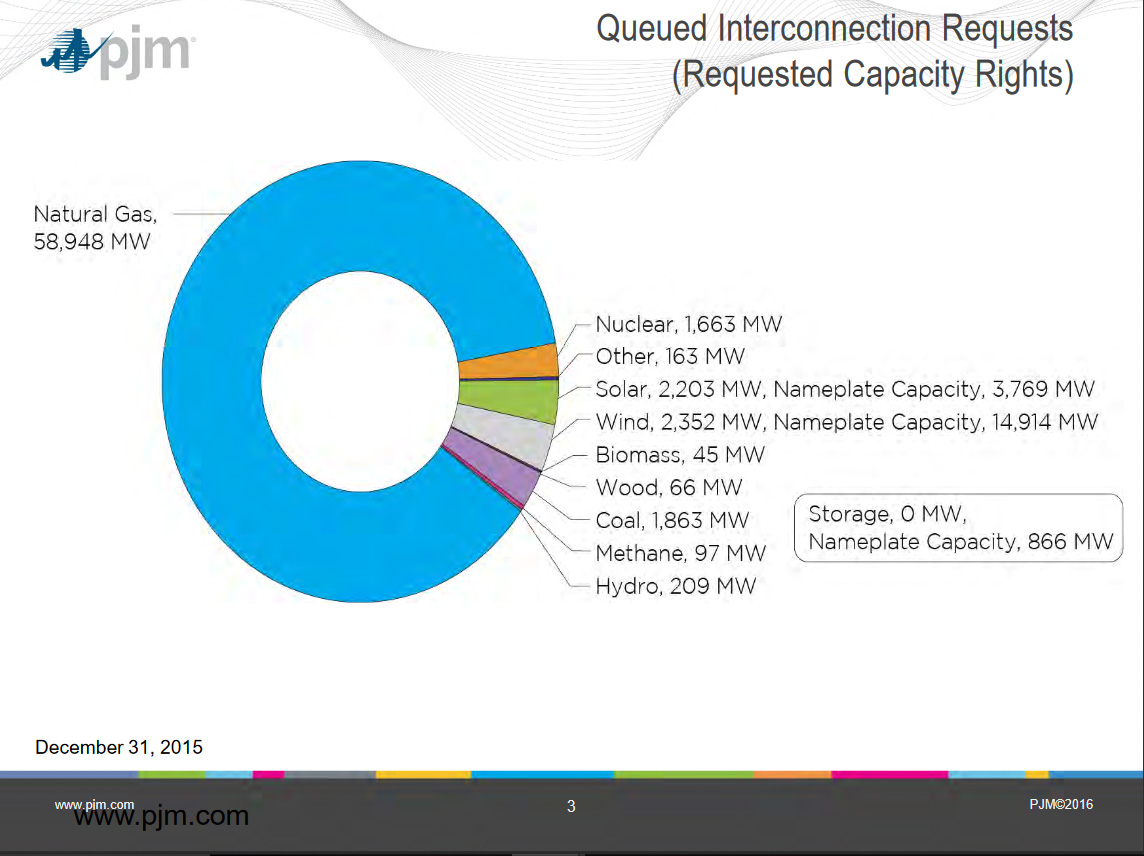 In other words, Maryland is already dependent on natural gas-fired power from other states that develop the resource using fracking, and that dependency will continue to grow as the state imports electricity from PJM Interconnection.

Would stopping a permanent statewide ban help alleviate some of the need for importing so much natural gas now or in the future? Unfortunately, with the swipe of Gov. Hogan’s pen, we’ll likely never know the answer to that question— or at least we won’t any time soon. But one thing is certain: Maryland will continue to rely on shale gas from other states made possible by fracking, and the economic benefits of that decision will go to states like Pennsylvania and West Virginia, not the Western Marylanders who so desperately need economic stimulation.