A group calling itself Defend the Gulf is reigniting the debate over energy exports with a list of demands to the Biden administration, including a permitting and construction moratorium on energy export infrastructure and a halt to all energy exports from the Gulf Coast. The letter and legislative efforts in the Senate resurrect the anti-export campaign of the mid-2000’s, reiterating claims of impacts that would occur from continued energy exports despite the last six years demonstrating they are false.

The Defend the Gulf campaign to stop energy exports from the Gulf of Mexico has been praised by Massachusetts Sen. Ed Markey (D), who said reinstating the ban was “crucial to our climate goals.” Markey has long been an opponent of energy exports. However, his predictions about the impact exports would have on energy prices and availability haven’t come to fruition.

“Exporting natural gas is a clear threat to affordable American industry, from electricity to agriculture and manufacturing. The oil-and-gas industry’s plans could result in 18 percent of our domestic natural-gas supply being exported. Our nation’s energy analysts warn that exporting this much natural gas could spike U.S. prices by more than 50 percent, as natural-gas prices are not set on a world market.”

Yet, despite the growth of a thriving U.S. liquefied natural gas (LNG) industry since February 2016, these fears have been unfounded. In fact, in 2020, U.S. natural gas prices were the lowest they’ve been in decades while the United States exported nearly 2.4 trillion cubic feet of LNG – or nearly 7 percent of total U.S. natural gas production.

Despite increased exports, and disruption to the energy industry in 2020, natural gas remains an affordable and reliable source of energy.

“We are concerned that lifting the crude oil export ban could harm U.S. consumers, businesses and our national security and we urge you to pay close attention to these adverse impacts that could result from any efforts to repeal or weaken this longstanding U.S. law.”

He has attempted to reinstate the oil export ban several times since it was repealed – most recently this month. Sen. Markey’s rhetoric on why this is needed has since changed to focus on climate change as his initial claims have been thoroughly debunked.

Despite lifting the oil export ban in 2015, U.S. energy security risk has never been lower, according to the U.S. Chamber of Commerce Global Energy Institute’s annual report:

“In the eight years since the U.S. risk score peaked in 2011, it has tumbled 30 percent, an unprecedented rate of decline.

“…The importance of the U.S. shale revolution in driving these remarkable improvements cannot be overstated. The application of hydraulic fracturing, horizontal drilling, and advanced seismic imaging has unlocked a tremendous oil and gas resource, turning energy scarcity into abundance.”

The Energy Information Administration’s 2021 annual energy outlook estimates that the United States will remain a net energy exporter through at least 2050 thanks to the development of shale resources.

Because of the abundance of natural gas, America has become a net gas exporter, a situation that is driving emissions reductions around the world. LNG exports are pushing a transition away from higher-emitting fuels and reducing global emissions, something that the Biden administration believes may be a key foreign policy tool in the years to come.

During her confirmation hearing, Energy Secretary Jennifer Granholm spoke of the continuing impact natural gas would have in American foreign policy:

“I believe U.S. LNG exports can have an important role to play in reducing international consumption of fuels that have greater contribution to greenhouse gas emissions.”

American power generators began switching from coal to natural gas more than a decade ago, after new technology led to a surge in production that dramatically lowered natural gas prices. The transition led to dramatic U.S. emissions reductions and marked improvements in air quality – benefits that could spread globally through the increased use of U.S. LNG in countries making similar transitions. 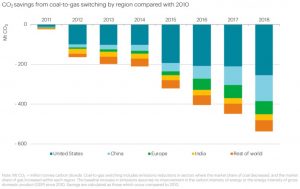 “Natural gas is a critical component of our national security and energy strategy that has made the United States a world leader in energy. As our world recovers from the impacts of the global pandemic and we look towards the future, it is critical for the federal government to get out of the way and allow private industries the freedom to innovate and export our clean, affordable, reliable energy to the world.”

Energy exports have been a topic of heated debate in the past, when opponents argued that allowing exports would hurt domestic consumers and leave the U.S. strapped for oil and gas. The shale revolution showed that fears of a depleting energy supply were largely unfounded, yet despite this, ”Keep It In the Ground” activists and policymakers continue to use similar arguments as justification for curtailing U.S. energy production.