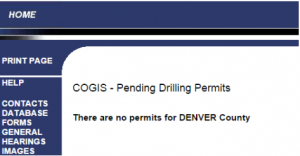 National “ban fracking” group Food & Water Watch is escalating its campaign to shut down Colorado’s oil and gas industry through activist recruitment and training programs in 50 cities across the state. As part of the new push, Food & Water Watch is teaming up with the Sierra Club to make false claims about drilling in Denver neighborhoods, when state records show no such drilling is planned.

The training programs were announced by Frack Free Colorado (FFC), a group with deep ties to Food & Water Watch and other national organizations. FFC is planning “Empowerment Trainings” in 50 Colorado cities by 2016, when anti-energy measures pulled from the statewide ballot this year could return. The activist trainings are intended to support local “ban fracking” campaigns but also to “unite these groups into a more cohesive state movement with the capacity to create real change.”

But FFC’s roots aren’t at the state or local level. As Energy In Depth has previously noted, East Coast groups Food & Water Watch, Artists Against Fracking and Water Defense helped create FFC as a local campaign arm of the national “ban fracking” movement. Despite their protests to the contrary and attempts to cover up their national ties, these groups remain very tightly interwoven. In fact, when it was created in 2012, FFC declared its mission was to “ban fracking in every city, county and [across] the State of Colorado.”

FFC’s co-founder Food & Water Watch wants to ban hydraulic fracturing – which means effectively banning domestic oil and gas production – statewide and across the nation. But the group’s ambitions are even bigger – it even wants a worldwide ban. Food & Water Watch’s “Global Frack Down” on Oct. 11 is a collection of protests with the following “mission statement”:

“Fracking for oil and gas is inherently unsafe and the harms of this industry cannot be fully mitigated by regulation … Fracking is not part of our vision for a clean energy future and should be banned.”

As Energy In Depth told Colorado’s newly formed oil and gas task force last month, the “ban fracking” ideology is so extreme it’s been rejected by environmentalists inside the Obama administration and by environmentalists like California Governor Jerry Brown (D), who has been a hero to the environmental movement for decades. President Obama’s Interior Secretary Sally Jewell says “[f]racking has been done safely for decades,” and Governor Brown says “ban fracking” activists “don’t know what the hell they are talking about.”

Because the facts don’t support the “ban fracking” ideology, groups like Food & Water Watch routinely resort to scare tactics to advance their cause. As part of the Global Frack Down, Food & Water Watch and the Sierra Club are trying to scare residents near downtown Denver by claiming there are plans to drill in their neighborhoods. This weekend, the group is asking Denver residents to meet just a few blocks west of City Park and then drive north to Weld County, where almost half the state’s active oil and gas wells are located. According to the invitation:

“Similar fracking plans are in the works for Denver. We want to send a delegation to observe the impacts in order to more effectively fight to make sure fracking doesn’t come to Denver.”

A review of the Colorado Oil and Gas Conservation Commission database turns up 132 records for existing wells within Denver, many of which have been plugged and abandoned. Additional research turns up the possibility of expanding oil and gas drilling within the boundary of Denver International Airport, which is roughly 20 miles from City Park. This isn’t surprising because the land occupied by DIA – which used to be part of Adams County – has a long history of energy development. When the City and County of Denver annexed the land under the 1988 agreement to build the airport, 90 wells existed on the property. As of 2013, 76 wells were in production at DIA contributing $5.5 million to the airport’s operating budget – an important revenue stream that helps “offset the airlines’ cost of operating so the airport can remain globally competitive,” according to airport officials.

You won’t see any distinction between City Park and DIA in the talking points Food & Water Watch is peddling to the residents of inner-city Denver. Because presenting the facts about oil and gas development, in their full context, won’t frighten and mislead those residents into opposing a fundamentally safe industry that’s vital to our state. When Food & Water Watch and the Sierra Club must engage in this kind of fear mongering to draw a crowd for a symbolic protest just a few blocks from City Park, it shows you just how fringe these “ban fracking” political groups really are.